BOB ABERNETHY, anchor: As religious groups become more and more committed to protecting the environment and more aware of the tradeoffs involved, the pros and cons of conservation are starkly visible in the mountains and hollows of Appalachia. There, coal companies engage not only in deep mining and strip mining, but also in what’s called mountaintop removal. The companies and others note the jobs, energy, and new land that creates. But some religious critics say the price in human terms is too high. Bob Faw of NBC News has our report.

BOB FAW: Appalachia is beautiful and broken. Its great bounty — coal, surfaced mined, torn from the earth after the tops of mountains are literally blown apart, dynamited to expose the minerals below. The mountain residue is then pushed into the valleys below. 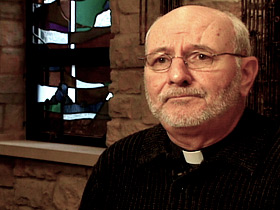 Father John Rausch of the Catholic Committee of Appalachia is openly challenging coal companies because, in his words, “God gave us a garden and we’re screwing it up.”

Father JOHN RAUSCH (Catholic Committee of Appalachia): The ecology is destroyed — the ecosystem of that area. It is not simply moving some dirt from here to there, but it’s actually devastating that entire symbiotic kind of web that goes on that we call nature, we call creation.

FAW: Every day Sharman Chapman-Crane, a Presbyterian working with the Mennonite Central Committee, says she can hear coal companies dynamiting. The blasts have undermined her house.

FAW: After mountaintop removal, streams once pure are clogged with dirt and debris.

Ms. CHAPMAN-CRANE: We can’t drink our well water here. It’s contaminated. We have to buy water to drink and cook with.

FAW: Jeff Combs says the chimney once on his family’s home was damaged by explosions caused by mountaintop removal. When the coal companies denied that and refused to pay for repairs, his elderly father who had been a coal miner and trucker most of his life had to take out a loan. 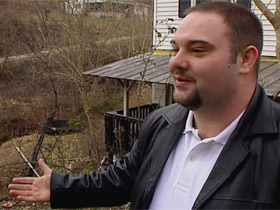 JEFF COMBS: My dad, you know, he worked for Star Fire and other coal companies for 30 years. I mean, it’s not like he’s out to get them or anything. It was just, “Please do this minor fix to our house, you know, from the blasting.”

FAW: They wouldn’t do that?

FAW: Coal companies remove mountaintops to get to the hard-to-reach seams or deposits of coal. It is, they say, safer than underground mining, cheaper and more efficient. The output – coal — does provide roughly half the electricity used in this country and provides thousands of jobs here in Appalachia. But increasingly, local church leaders like Mennonite minister Duane Beachey complain that all this comes at too high a price.

Rev. DUANE BEACHEY: The environment is part of the wider social justice issue I think that as Christians we need to be concerned about. As a person of faith, I just always have felt like we need to be on the side of people who have no power and no voice. And I just think that the coal companies have particularly exploited the people and the region here. 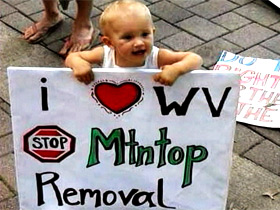 Fr. RAUSCH: You go up the hollers and you ask the folks, folks who recognize that that is their culture. And you are really wiping out the entire venue for where they were born and raised and their entire family, their self-image.

FAW: Angered and worried, church groups are doing more than lifting their voices.

FAW: A well known artist in the area, Jeff Chapman-Crane, has created a sculpture and displayed it throughout Kentucky and the nation’s capital to highlight what’s happening in Appalachia.

JEFF CHAPMAN-CRANE (Artist): On the side of the sculpture here is the verse, “The earth is the Lord’s and the fullness thereof.” Just the concept that, you know, it’s for our use but it doesn’t belong to us. I didn’t want to pull any punches, so to speak. I wanted to be very graphic and convey the idea of what we are doing to the earth, that we are causing a great deal of destruction.

FAW: A coalition of several Appalachian Christian groups now brings in tour groups to see the effects of mountaintop removal and campaigns for tougher regulations.

Ms. CHAPMAN-CRANE: What we are after is more responsibility taken by the corporations on the type of mining they do and responsibility to the community of treating them well.

FAW: It is a trade-off. Mountaintops nearby have been leveled, but in the process jobs, taxes and electricity have been created. And as for that land which was dynamited, or as the critics put it, “disfigured,” there is good use for that land, too.

WILLIAM GORMAN (Mayor, Hazard, KY): In this country we have to mow down the top of the mountain sometimes in order to have room for people to live.

FAW: In Hazard, Kentucky, the shopping center, the hospital, even the airport — all are built on reclaimed mountaintop land. 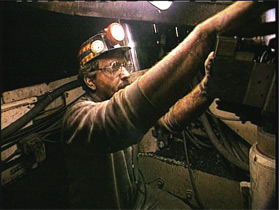 Mayor GORMAN: We don’t have any place to build or live without doing something to help beautify the mountains by cutting them down a little bit.

FAW: And here the men who depend on the coal industry for their livelihood, men like Jeff Messer, live on that reclaimed land.

FAW: That property that wouldn’t have been built if the land hadn’t been cleared?

FAW: Messer and some of his coworkers consider the church groups meddlesome and uninformed.

ALBERT (PEE WEE) WHITE (Coal Worker): If you look at some of those churches, they are probably on land that has been mined or whatever, and they wouldn’t have their church there.

Mr. MESSER: I belong to church. I pay tithes every week, and that is where they get the tithes from, from what I make here in the coal fields. God put all the resources on this Earth for our benefit. He put us in dominion over the wildlife, the fish. He told us, you know, that was for us. Well, this coal is for us to survive with.

FAW: A recent Environmental Protection Agency study found that mountaintop removal impacted just two percent of all streams. Federal laws designed to prevent scenes like this mandate reclamation, and the industry points out that 2.3 million acres have been reclaimed. 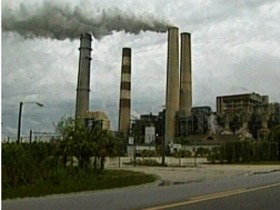 LUKE POPOVICH (Spokesman, Coal Industry): It is not as if people are exploiting these mountains and then simply leaving them for the next generation to clean up. That is no longer done and hasn’t been done for many decades.

FAW: But the religious eco-warriors say grass and pines planted on devastated mountaintops will never be as majestic as what was once here no matter what the coal industry proclaims.

Mr. POPOVICH: I think in terms of human welfare it’s incumbent on religious people to consider the value that mining and other industries give, not simply the occasional environmental damage that is done.

FAW: That damage, the church groups counter, is more lasting than the coal industry admits. The real issue here, they insist, is not economics but stewardship of the land.

Ms. CHAPMAN-CRANE: I grieve every day I cross the mountains anymore. It breaks my heart to see what we’re doing, not just in loss of habitat to the animals and what we’re doing to God’s creation, but how cheaply we’re selling our souls for energy.

FAW: As she continues worrying about her home, as Jeff Combs’s father keeps paying off that loan to fix his house, mountaintops will be removed for coal. For the country, a source of heat and light. For this region, its lifeblood. And for some faiths, a battleground.