KIM LAWTON, correspondent: Deep in the bayous of south Louisiana, residents have little doubt about the impact of climate change.

THERESA DARDAR: We live here, so we see it happening. We see the land sinking, sea level rise, we see it all.

LAWTON: Theresa Dardar is part of a small Native American fishing community whose families have been here for generations. On a boat ride down the bayou, she shows me where her grandfather lived.

DARDAR: This used to be full of trees, and they used to have a lot of cattle here.

LAWTON: Today, water has overtaken much of the marshland, and little can grow here. The area is littered with what Dardar calls “ghost trees.” 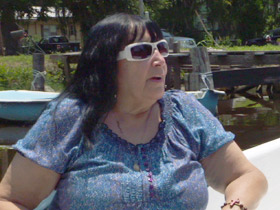 DARDAR: Ghost trees or skeletons. Everything around here is dead.

LAWTON: Most scientists who study this area say changes in climate fueled by growing amounts of carbon emissions have led to rising sea levels. That has accelerated coastal erosion and generated more severe flooding, and that in turn has deposited salt and other toxins that are killing vegetation and water life. Extracting oil has further weakened the marshes. Many areas have been left with little protection from storm surges, and with every storm, more land disappears. According to the US Geological Survey, since 1932, South Louisiana has lost an area of coastal wetlands as large as the state of Delaware, and it continues to lose the equivalent of one football field of coast every hour.

LAWTON: Kristina Peterson is a Presbyterian pastor, professor of environmental planning at the University of New Orleans, and coordinator of the interfaith Wetlands Theological Project. She says these environmental threats have already displaced many in vulnerable Native American and Cajun communities. 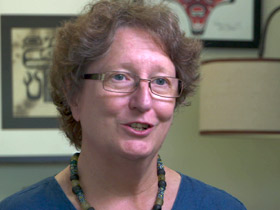 PETERSON: As folks are forced out because homes keep receiving water or they can no longer get to their homes because of the water, they are forced to move to other locations, which then breaks that whole network that is so close-knit.

LAWTON: People of faith across the spectrum have been increasingly making climate change a top priority. Many say the teachings of their faith inform their concern for the environment. Pope Francis emphasizes the impact of environmental changes on poor and vulnerable people and is issuing a two-fold moral challenge: care for creation and care for those in need.

BISHOP SHELTON FABRE (Diocese of Houma-Thibodeaux): How do we respond to the needs of the poor, and how do we exercise both dominion and stewardship over creation? How do we keep those in a balance for the good of all, recognizing that the poor right now are already being affected?

LAWTON: Many environmental activists are thrilled to have the support of this popular pope. Lonnie Ellis is a lay Franciscan and associate director of Catholic Climate Covenant.

LAWTON: But there is also pushback, particularly from some conservative Catholics who believe concerns about climate change are overblown. Marc Morano publishes Climate Depot, a website that is skeptical of many warnings about global warming. 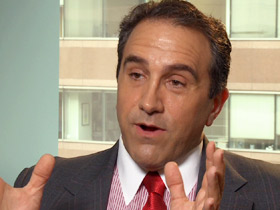 MARC MORANO (Climate Depot): Catholics in America and around the world might be puzzled, with all the other issues going on, whether it’s persecution of Christians, whether it’s severe poverty issues, whether it’s crisis in faith, priest shortages, wars, conflicts—why is the Vatican spending so much capital on global warming? That’s going to be a head scratcher.

LAWTON: In south Louisiana, Isle-de-Jean Charles is considered one of the places at the most risk from environmental issues. Eighty-two-year-old Catholic priest Father Roch Naquin was born here and lives in his family home. It was built on two-foot-high blocks in the 1950s. After flooding from Hurricane Juan in 1985, Naquin went through the very costly process of raising the house on 8-foot blocks. But then in 2002, with Hurricane Lili, the house flooded again.

ROCH NAQUIN: Then I made arrangements to raise it up to the present level, 11 feet up in the air.

LAWTON: From his 11-foot-high deck, Naquin sees dramatic changes in the surroundings.

ROCH NAQUIN: As you look now, you see water all over the place. When I was small, it was all good trapping land. People have asked me many times, do you plan to stay here? And I say, "Well, yeah, where you going to go?"

ALBERT NAQUIN: Pretty soon it won’t be a choice. 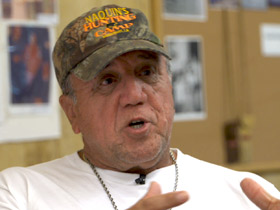 LAWTON: Albert Naquin is tribal chief of the area. He says in the last 20 years his community has diminished by more than half.

NAQUIN: Whether they want to or not, they’re going. The ones that are living there are the hard core, plus they have a home to live in. The others mostly lost their homes during the hurricanes.

LAWTON: Kristina Petersen says her concern for the environment comes directly from her faith.

PETERSON: God takes extreme pleasure in what there is around us in creation, and when we destroy it I can’t imagine the pain that that causes God.

LAWTON: Peterson has been very involved with traditional bayou communities here. She works for policies that will address the damage human activities do to the coastal wetlands. She believes restoration is possible in many areas.

PETERSON: It’s going to take the political and religious will of the people to say, “This is important. We need to save this place not only for the people, for the environment, but for God’s creation.”

LAWTON: But Peterson says it’s already too late for some places. She and Chief Albert are lobbying for money and land to relocate his entire community further inland.

ALBERT NAQUIN: It’s cheaper to put a new community together then it is to try and restore it. Just give us that community that we need, and from there we should be able to make it on our own. 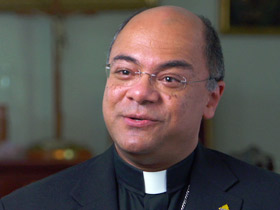 LAWTON: Bishop Shelton Fabre says his Diocese of Houma-Thibodeaux is doing what it can to provide practical and spiritual help.

LAWTON: Since 2005, Catholic Charities in the diocese has spent $7.5 million helping people deal with the crisis.

ROBERT GORMAN (Catholic Charities): We’re in the business of helping people to try to stay in their communities for as long as they can.

GORMAN: We call it the Matthew 25 Program, after the passage from Matthew; we’re called on to shelter the homeless, feed the hungry, care for the sick.

LAWTON: Like Pope Francis, Gorman asserts that another way to help the needy is to push for changes at the individual and policy levels. 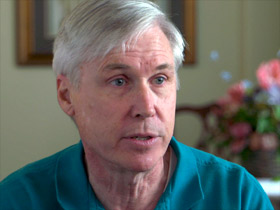 GORMAN: I think we have to be advocates, we have to practice individual responsibility, and we have to organize and educate.

LAWTON: But this makes some Catholics uncomfortable. Marc Morano is part of a coalition that went to Rome in April urging the Vatican not to rely only on scientists who take what they call “an alarmist, extremist” position on climate change.

MORANO: None of the predictions, the dire predictions they made so far are coming true. They’re failing to come true. And this is one of the things that the pope is not hearing. He’s only hearing one view. Carbon-based energy development is the best friend for poor people and would give them the best chance at life.

LAWTON: Morano is also concerned about the Vatican being too closely tied to the United Nations climate agenda.

MORANO: On many issues from abortion, euthanasia, overpopulation concerns there’s going to be massive conflicts with Catholic teachings. And I think the pope has got to, and the Vatican, has to think this through better. 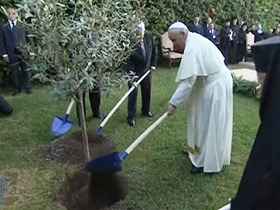 GORMAN: The Church works with people who have similar agendas, for specific issues. So just because the Church has an observer at the UN doesn’t mean that the Vatican is endorsing everything the UN does.

LAWTON: Gorman tells skeptics the Church must be prudent in addressing climate change.

GORMAN: You can disagree all you want, but you’ve seen the effects, and we have a moral obligation first to respond to the immediate needs of people, but we also, with the virtue of prudence, we have an obligation to assume that this is happening and therefore take steps to deal with it.

ELLIS: I think coming at it with a hopeful, faithful message is starting new kinds of conversations that is moving past some of our deadlock that we’ve had before.

FABRE: I think lifting it up at this time has challenged me to also say, "In what ways am I taking creation for granted? In what ways am I making assumptions about the environment or not really knowing what my actions are completely doing?"

LAWTON: And here in the bayous there is hope the statement will lead to tangible change.

DARDAR: Maybe people will listen to him. If nothing is reversed? I see a lot of damage to Mother Earth. A lot of damage.

In the bayous of south Louisiana, faith-based activists are trying to help vulnerable communities already affected by climate change. Most scientists say climate change has led to rising sea levels that are accelerating erosion and land loss, leading in turn to the displacement of local residents. Last summer, Pope Francis released his much anticipated encyclical on climate change, and while many environmental advocates support the pope’s contributions to the current debate, there are also some critics who say political and scientific issues are beyond his purview.

Evangelicals and the Environment

China, Buddhism, and the Environment