BOB ABERNETHY:  Now, a profile.  If you are young, you may never have heard of this man.  But if you are of a certain age, you probably remember him well.  For many, not all, he was a hero.  He is the Reverend William Sloane Coffin.  In the 1950s, ’60s, and ’70s, first as chaplain at Yale, later as senior minister at Riverside Church in New York, he was a passionate preacher and controversial opponent of racial segregation, the Vietnam War, nuclear weapons and the draft.  I spoke with him about God, justice, peace, and being alive.

Coffin both preached what he saw as social justice and led controversial campaigns for it. 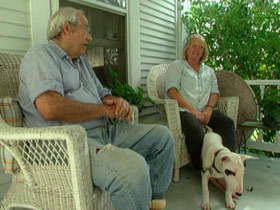 Reverend WILLIAM SLOAN COFFIN:  I thank God for the presence here of so many young men and women here, who are going to refuse registration.

ABERNETHY:  Today, Coffin has retired to the little town of Strafford, Vermont, where he lives on the village green with his wife, Randy, and their terrier, Rosie.

Coffin is 80 years old now.  Two strokes have slurred his speech.  He can not walk much, and has had to give up playing the piano, of which he was a master.  But, his commitments and beliefs are as strong as ever.

The Rev. COFFIN: What this country needs, what I think God wants us to do, is not practice piecemeal charity but engage in wholesale justice. Justice is at the heart of religious faith. When we see Christ empowering the poor, scorning the powerful, healing the world’s hurts, we are seeing transparently the power of God at work.

God is not too hard to believe in. God is too good to believe in, we being such strangers to such goodness. The love of God is to me absolutely overwhelming. It’s clear to me, two things: that almost every square inch of the Earth’s surface is soaked with the tears and blood of the innocent, and it’s not God’s doing. It’s our doing. That’s human malpractice. Don’t chalk it up to God. Every time people say, when they see the innocent suffering, every time they lift their eyes to heaven and say, “God, how could you let this happen?” it’s well to remember that exactly at that moment God is asking exactly the same question of us: “How could you let this happen?” So you have to take responsibility. If you back off from every little controversy in your life you’re not alive, and what’s more, you’re boring. 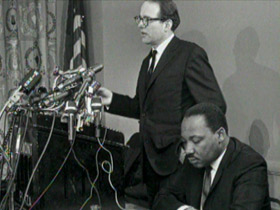 ABERNETHY: I asked Coffin to think back on the civil rights and other protest movements he helped lead.

The Rev. COFFIN: I think the greatest pleasure was being with black civil rights leaders and followers, because they were so alive. You can be more alive in pain than in complacency.

The antiwar movement split the nation in a more acute, painful way. I think, in retrospect, just about everybody agrees it was a terrible, terribly misconceived war.

ABERNETHY: Coffin became the leader of the U.S. campaign against nuclear weapons.

The Rev. COFFIN: Only God has the right to destroy all life on the planet. All we have is the power. We haven’t the authority. Therefore to make, to threaten to use nuclear weapons must be an abomination in the sight of God.

ABERNETHY: Are you a pacifist?

The Rev. COFFIN: Fifty-one/forty-nine. I’m a nuclear pacifist, that’s for sure. But there is an irremediable stubbornness about evil. We have to recognize it, including our own complicity in it. We have to constrain it, but I doubt we will ever eradicate it. To say, “Grant us peace in our time, O Lord” — God must say, “Oh, come off it! What are you going to do for peace, for heaven’s sake?” It’s not enough to pray for it. You have to think for it, you have to suffer for it, and you have to endure a lot for it. So don’t just pray about it.

ABERNETHY: Coffin rails at neglect of the poor and U.S. policies in Iraq. Above all, he condemns what he sees as the country’s self-righteousness.

ABERNETHY: As he conducts what he calls his lover’s quarrel with his country, Coffin acknowledges that he has to be careful not to become self-righteous himself — perhaps especially when he is honored, as he is often. Last year Union Theological Seminary in New York gave him its highest medal. 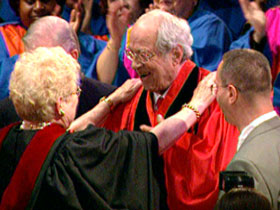 Meanwhile, a collection of Coffin’s writing, CREDO, is selling well and, encouraged by that, he is at work on a new book he calls LETTERS TO A YOUNG DOUBTER — a college freshman.

The Rev. COFFIN: And the rule is, he won’t treat me as if I were too old if I won’t treat him as if he were too young.

ABERNETHY: I spoke with Coffin about growing old.

The Rev. COFFIN: I’d just as soon live a little bit longer. But when you are 80, you can’t complain. Joy in this world comes from self-fulfillment. Joy is a more profound experience than mere happiness. When you feel a sense of undeserved integrity because you think you’re in the right fight — against segregation, against the war in Vietnam, against the stupid and cruel discrimination against gays and lesbians — these are the right fights, I feel very deeply. And the sense of self-fulfillment which comes from being in the right fight is a wonderful thing.

I remain hopeful. The opposite of hope is despair — not pessimism, despair. And as a very convinced Christian, I say to myself, “Come on, Coffin. If Christ never allowed his soul to be cornered with despair, and his was the greatest miscarriage of justice maybe in the world, who the hell am I to say I’m going to despair a bit?

When you get older, friendship obviously runs deeper and deeper. And, I would add, nature gets more interesting the nearer you get to joining it, and also more beautiful. I can sit on the front porch here and watch the sun coming in through the maple leaves. You know, God is good.

ABERNETHY: In our conversation, Coffin quoted words he liked, words he attributed to Irenaeus, an early church father: “The glory of God is a human being fully alive.” Bill Coffin was such a man.