BOB ABERNETHY, anchor: There is a group of Benedictine nuns in Missouri who bake and sell millions of Communion wafers, small and large. But some would-be communicants complained that they are allergic to the gluten in the wheat in the nun’s wafers — the hosts, as they are known. So they could not receive Communion. For the sisters that was a challenge, as Betty Rollin reports. 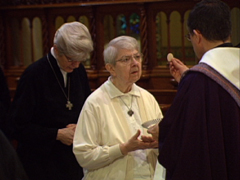 BETTY ROLLIN: They are the Benedictine Sisters of Perpetual Adoration. They live in Clyde, Missouri, a remote — a very remote — part of the state, and what they do is pray.

Sister LYNN D’SOUZA: Our main work is prayer. That is what we see as our mission for the Church, for the world: to pray for the needs of people of all places of all times.

ROLLIN: They pray together five times a day, and they pray alone two-and-a-half hours a day. But that’s not all they do. The mission of the Benedictines is both to pray and to work. These sisters’ work is to bake, and they’ve been baking for nearly 100 years. Today, they are the largest religious producers of Communion wafers, shipping two million wafers a week.

Sister LYNN D’SOUZA: We as Catholics believe in the true presence of Christ in the Communion wafer, in the
wine that we use at Eucharist. In the Gospel, Jesus says those who eat my flesh and drink my blood dwell in me and I dwell in them. To receive the wafer and to receive the wine is integral to the faith life of most Catholics.

ROLLIN: But a problem arose when the sisters began to hear from some Catholic parishioners who couldn’t receive the all-important sacrament of Communion because the wafers contained wheat. They had celiac disease, a disorder which makes the gluten contained in wheat undigestable.

Sister JANE HESCHMEYER: I was working in the customer service department in the early ’90s and a woman called in and said, “Do you make hosts that have no gluten in them because I’m intolerant to gluten and I need that?” I’d never heard that before, and we certainly didn’t, because wheat has gluten in it, and that was that.

Sr. D’SOUZA: The Catholic Church requires that breads used at Eucharist contain some wheat, and this is in keeping with the tradition of the Church. It’s believed that’s what Jesus used at the Last Supper.

So the Catholic Church is saying we need a wheat bread to be used. People with celiac disease are saying, “We need a bread that has no gluten in it.” Wheat equals gluten pretty much, so that was the dilemma we were working with. 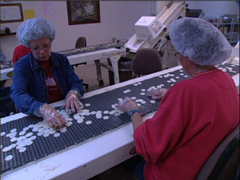 Sr. HESCHMEYER: And gradually more and more calls started coming in. So I started doing research and talked to technicians, bakers, lawyers, doctors, people who couldn’t tolerate gluten, to try to find out everything I could about it.

ROLLIN: Years later, in 1999, Sister Lynn, newly arrived at the monastery after receiving a degree in biochemistry, joined the baking effort.

Sr. D’SOUZA: I just like happened to cross Sister Jane in the kitchen one afternoon working on these breads, putting stuff together. Just because I have somewhat of a scientific background, it intrigued me as a science project-type thing. It wasn’t that I had high lofty ambitions of providing someone’s need. I just thought, oh, this is a science experiment.

ROLLIN: Given the Church’s insistence that wheat had to be in the wafer, they thought that wheat starch might be a solution, since most of the gluten is removed.

Sr. HESCHMEYER: What the scientists were telling us what we were trying to do was impossible. If you add wheat starch and water you get glue. Or if you bake it, it gets very hard, which is what we found out. It was a certain intrigue for me when they said it was impossible.

I said, “Oh, that’s a challenge!” And so, if the Holy Spirit was asking people to ask us to do it, the Holy Spirit had something in mind. There was just something in me that just said go with this thing — we could do it — although I had no idea that 12 years later I would still be doing it or trying to do it.

ROLLIN: A supporter from the U.S. Conference of Catholic Bishops took their plight to — where else — the Vatican.

Sister HESCHMEYER: He had been in Rome, and when he came back he said he had just talked to then-Cardinal Ratzinger, who is now Pope Benedict, and said that Cardinal Ratzinger said if the sisters in Clyde can produce this bread, we will fully support it.

ROLLIN: With that encouragement and armed with two different kinds of wheat starch supplied by the bishops, the nuns gave it one last try. 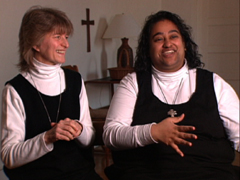 Sister HESCHMEYER: We decided to try mixing both of those together with some water, and what we came up with was like sticky goo. It stuck to our fingers.

Sr. D’SOUZA: Voila! There was a bread.

Sr. HESCHMEYER: It was not pretty. It was a very interesting looking little bread on the plate, but it had withstood the baking process. It was intact. It was not gooey. It didn’t stick to the plate. We picked it up. I mean, for us it was beautiful

Sr. HESCHMEYER: We knew this bread had potential.

Sr. D’SOUZA: Our first reaction was to eat it.

Sr. HESCHMEYER: Yes, we have to try this, and it tasted delicious. It was light and crisp. It was just what we were looking for, we hoped.

Sr. HESCHMEYER: It was wonderful.

Sr. D’SOUZA: It was. I can see in hindsight that we were being used by God. You know, we were God’s hands, God’s instrument, and when I look back on it, I’m kind of awed.

CUSTOMER SERVICE REPRESENTATIVE (speaking to Sr. D’Souza): And Sister, I left you all the low-gluten orders, and I think there are five new accounts that we’ve gotten today.

Sr. D’SOUZA: Oh my gosh! All right. It must be because of Easter.

ROLLIN: It is peak season for wafer production, both for the wheat variety and the now thriving low-gluten specialty. Business is booming. A patent is pending.

GIVE US THIS DAY: LENTEN REFLECTIONS ON BAKING BREAD AND DISCIPLESHIP by Christopher Levan