JUDY VALENTE, correspondent: The city of Norcia in central Italy. A quiet town of stone streets, tiled roofs, and spectacular scenery beneath the mountains of Umbria.

Norcia, or Nursia as it’s sometimes called, is famous for its pork sausages and truffles—and as the birthplace of St. Benedict, founder of Western monasticism. Now Norcia will be known for something else, too: these singing monks.

FATHER CASSIAN FOLSOM: We sing the praises of God nine times a day. So if you add all that up, it’s probably five hours, maybe, every day, rain or shine, 365 days a year, all the time.

VALENTE: The monks’ resplendent sound is now on CD, one that’s topped the Billboard charts in traditional classical music for several weeks in a row. Their recording includes the Gregorian chant they sing daily at their community prayer, and it has captivated listeners far beyond this monastery’s walls. 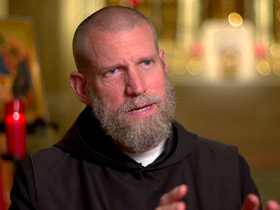 FATHER CASSIAN: There’s a great hunger and thirst that people have, even non-believers. There’s a hunger for something more, and because people don’t get that something more in everyday society, they look for it in special moments, and if the CD can respond to that need, then we’ll be very pleased.

VALENTE: Father Cassian Folsom is the prior, or leader, of the monastery in Norcia. He says this form of sung prayer is as essential to monks as their daily bread.

FATHER CASSIAN: It’s a way of expressing our love for God. When a monk gives his life to God, he has to express that in a physical way, not just an intellectual way, and singing involves the whole body and the mind and the soul.

VALENTE: Across the US, monastic music is experiencing a renaissance. These Benedictine sisters living on the plains in Gower, Missouri topped the Billboard chart three times in the past two years with CDs of their chant. The Dominican Sisters of Mary from Ann Arbor, Michigan, have also recorded their community prayer.

FATHER CASSIAN: Well, probably not, because you have to believe in what you’re singing. We sing this all the time. It’s not just for a special occasion, and so it comes with a sort of naturalness, almost effortlessness, that comes from long experience. 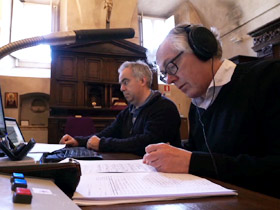 VALENTE: The monks’ CD is called “Benedicta” and is based on Scripture texts, ancient prayers, and the guide for monastic living known as the Rule of St. Benedict.  Christopher Alder is the Grammy-winning producer who traveled to Norcia to supervise the monks’ recording.

CHRISTOPHER ALDER (De Monfort Music Video Trailer): The chant means something to them, and you can hear that in the sincerity of their singing. It does have something, in the best sense, that’s hypnotic or meditative. It has something eternal to it. One feels one is in touch with the past.

VALENTE: Father Cassian’s journey to Norcia and monastic music was hardly a straight path. He was studying voice at Indiana University when he says he felt a call to monastic life. He entered the Benedictine order at St. Meinrad Abbey in Indiana in 1979.

There had been no monks living in Norcia since 1810, when they were evicted under Napoleonic laws in a wave of anti-clericalism. Fifteen years ago, the citizens of Norcia petitioned the worldwide leader of the Benedictines, seeking the monks’ return. 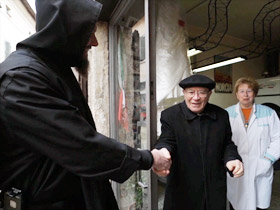 FATHER CASSIAN: There’s only about 5,000 people in the township of Norcia, and they gathered about 5,000 signatures, even though that’s not exactly how things work in terms of superiors making decisions and so on. But that demonstrated their enthusiasm.

VALENTE: Father Cassian was tapped to re-establish the monastery named for St. Benedict.

FATHER CASSIAN: The townspeople, they look to the monks if they have problems, if they want to talk to somebody about their family life. And to have the monks back after almost 200 years helps to complete the identity of the town, you know. So it’s almost as though if the monks are there, then everything’s going to be okay.

VALENTE: The monks have to be self-supporting. So when they aren’t praying—and singing—they work. They brew beer.

FATHER CASSIAN: We learned the art from the Trappist monks in Belgium. We renovated an old car garage below the monastery as the brew hall. All the monks take part on bottling days, signing up for an hour slot to feed the bottling machine.

VALENTE: And yes, the monks do occasionally tip a glass or two. 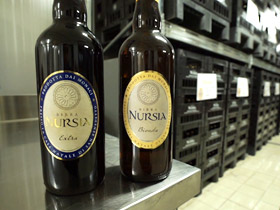 FATHER CASSIAN: The beer is very good, and it has served, in a remarkable way, as a kind of drawing card for evangelization, because even if people are not churchgoers, most everybody likes to drink beer. So they come to the monastery for beer, and then pretty soon they start talking about other things, other more important things.

VALENTE: Lately, Father Cassian has been thinking about some important matters of his own. The 63-year-old monk has been diagnosed with a recurrence of cancer—the multiple myeloma that he first battled in 2006 and thought he had beaten.

FATHER CASSIAN: As anybody who is diagnosed with cancer, it changes your life. I think it has given me greater patience, greater tolerance, looking at things from a “not everything matters as much as you might think it does.”

VALENTE: You’ve dedicated your entire life to seeking God, to service to others and to God. Did you ever feel, “Gee, I deserve a little better than two diagnoses of cancer, a serious cancer?”

FATHER CASSIAN: It’s just a part of life, that’s all. I would say this: we can look at death as a thief or a messenger. A thief comes and steals what is most valuable to us, and so we’re afraid. A messenger who comes to tell us that our beloved is at the door, we respond much differently, don’t we? So that’s the kind of choice we have to make. Is it a thief or a messenger? 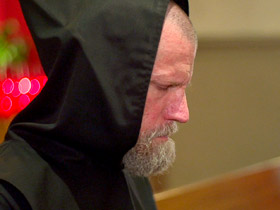 VALENTE: And for you it’s a messenger?

VALENTE: He says his diagnosis has also brought him closer to the people of Norcia.

FATHER CASSIAN: Anyone nowadays who gets diagnosed always comes to me because there is an immediate kind of bond there. So what it has done, aside from the acceptance of death, is make me more compassionate to those who suffer similar things. And so, in a strange and paradoxical way, it’s been extremely positive.

VALENTE: Father Cassian’s cancer is currently in remission for the second time. He has been told it can return and may be fatal the next time. Music has become an even greater source of comfort, one he says he wants to share with others.

(speaking to Father Cassian): What would you like people to take away from the CD?

FATHER CASSIAN: An experience of serenity and peace and the calming of agitation.

VALENTE: With the monastic community now firmly re-established in Norcia, and this CD as part of its legacy, Father Cassian feels that he can leave this world with the words on his lips of Simeon, an old man mentioned in the Gospel of Luke. After seeing the baby Jesus, he said, “Now, Lord, dismiss your servant. Let him go in peace.”

In the Italian town where St. Benedict was born, Benedictine monks led by Father Cassian Folsom, an American, gather nine times daily to worship God with Gregorian chants and prayer. Their singing has been recorded and is now a chart-topping album, allowing others outside the walls of the monastery to experience the music and devotions of monastic life.

Listen to some of the music from the Monks of Norcia’s album Benedicta.

Bells from the Basilica (Instrumental)

Book Excerpt: Atchison Blue: A Search for Silence, a Spiritual Home and a Living Faith