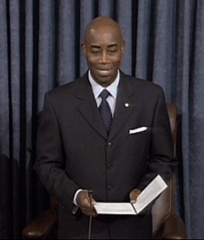 Eternal and dependable Creator of the universe, we acknowledge you as the giver of every good and perfect gift. You are our solid rock; you arm us with strength. Thank you for the seasons and climates, for sowing and reaping, for color and fragrance. Thank you for the time of harvest when our labors and dreams are rewarded.

Today, bless our lawmakers. Illumine their lives to keep them on the right paths. May the creative power of your word produce in them a stronger faith and an indomitable hope. Keep them from slipping; fill them with courage as you show them your unfailing love. Give them an attitude of openness to receive the fullness of your grace and truth. We pray in your precious name. Amen.

God of our weary years, God of our silent tears, we do not doubt your generous love. We know that you gave our nation the gift of heroic men and women who became the first African American airmen. Because of your providential love, you equipped the Tuskegee Airmen with the intelligence, skill, courage, and patriotism to expand the role of African Americans in the military. You enabled them to produce a record of excellence in spite of having to encounter racism, discrimination, and bigotry in America and overseas.

Lord, you infused them with the courage to disobey unjust laws, engaging in judicious civil disobedience that opened doors of opportunity for thousands who followed them. Thank you, Lord, for the gift of the Tuskegee Airmen.

As we have been blessed in honoring these great Americans at this wonderful ceremony, give us this day:

forgiveness for the past,
courage for the present,
and hope for the future.

In the days to come, bless the Tuskegee Airmen in their going out and coming in, in their rising up and lying down, in their moments of pleasure and sorrow, in their labor and leisure, until they cross the bar to experience another medal ceremony in a land beyond sun, moon, and stars, where the days know neither dawn nor darkness. May they hear you, the commander in chief of the universe, say to them in that day, “Well done, good and faithful servants. You have been faithful over a few things, come on up a little higher, I will make you ruler over many things. Enter now into the joys of your Lord.” We pray this in your sovereign name. Amen.

Eternal Lord God, the giver of every good and perfect gift, this evening we express our gratitude to you for giving our nation the blessing of President Gerald R. Ford.

Lord, when this land desperately needed strong moral leadership, you gave it President Ford’s astuteness, honor, commitment, and courage. When we needed a model of unswerving integrity, you provided us with someone who was true and honest. Accept our gratitude for his courage to decide based on principles, for his pragmatic leadership during cynical times, and for his long life of exemplary service. Thank you for his efforts to do what was in the country’s best interest and for helping to bind the nation’s wounds after Watergate and Vietnam. Thank you also for permitting him to remind us that family and faith still matter and that right living is a language which is clear to everyone.

Comfort those who mourn, particularly Mrs. Ford and the children. May the memory of President Ford’s dignity, decency, diligence, and decisiveness challenge us to use our lives for your glory.

We pray in the name of him who is the resurrection and the life. Amen.