U.S. Supreme Court: “Oyez, oyez, oyez. All persons having business before the Honorable, the Supreme Court of the United States...”

TIM O’BRIEN, correspondent: The Court's hearing itself began with an invocation to God...

U.S. Supreme Court: “...for the Court is now sitting. God save the United States and this Honorable Court...”

O’BRIEN: The House of Representatives and the Senate also routinely begin with prayer... 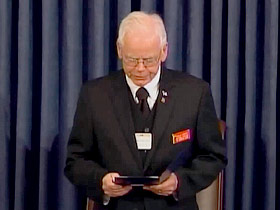 O’BRIEN: ...and the Supreme Court ruled thirty years ago that doing so does not violate the First Amendment prohibition of government establishment of religion. But this week's case from Greece, New York—a predominantly Christian suburb of Rochester—may test the limits of such prayer. The prayers that open the town board's monthly meetings are almost always Christian, as are those who give them. When the case first went to court, only four of more than 130 prayer givers were non-Christian:

Father Alex Bradshaw: “We are approaching the end of the Easter season... And the Ascension of the Lord on Thursday of this week...”

O’BRIEN: A federal appeals court in New York ruled the town board had unconstitutionally favored the Christian faith after observing that “two-thirds of the prayers offered contained references to Jesus, Your Son, or the Holy Spirit.” Attorney Tom Hungar, defending the town of Greece in the Supreme Court, warned of the risks of allowing the government to engage in deciding who may offer a prayer or the language it may contain.

TOM HUNGAR (Attorney, Town of Greece, NY): To say you can pray in these words to these deities, but not in those words to those deities, that is government regulating the theological content of prayers, prescribing what is orthodox and what is not in religion, and that is contrary to our tradition of religious liberty. 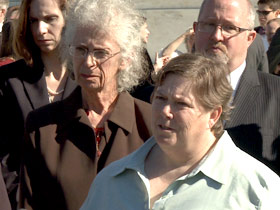 O’BRIEN: The plaintiffs in the case, Linda Stephens who is an atheist and Susan Galloway who is Jewish, say their town governing board is a lot different from Congress. Their lawyer told the Court the town's prayers are inherently coercive.

DOUGLAS LAYCOCK (Plaintiffs' Attorney): You cannot refuse to participate in the prayer just before you stand up to ask the board to take discretionary action that affects you directly and personally. This is highly coercive. It is also a sectarian endorsement. This case is about Christians aggressively imposing themselves upon their fellow citizens with the power of government.

O’BRIEN: The justices appeared to be split along ideological lines, with conservative Justices Antonin Scalia and Sam Alito most supportive of the town board. Alito pointed out that the opening prayers of the very first Congress were highly sectarian, much like those in Greece, New York. When the First Amendment was ratified in 1791, the country was largely Protestant—unlike today, when countless religions are represented. Several justices pointed out that crafting a prayer today that doesn't offend somebody could be daunting, if not impossible.

“This case is about Christians aggressively imposing themselves upon their fellow citizens with the power of government,” says plaintiff lawyer Douglas Laycock. But defense attorney Tom Hungar warned that the case could lead to “government regulating the theological content of prayers, prescribing what is orthodox and what is not in religion.”