TIM O’BRIEN, guest anchor: Catholics of a certain age grew up hearing the Mass only in Latin. But since the 1960s, priests have been allowed to say the Mass in Latin only with the permission of their bishop. The Vatican is now loosening those restrictions, so the Latin Mass — also called the Tridentine Mass — may soon become more widely available, although few of the world’s Catholics understand Latin. And yet over the years some Catholics have remained committed to a Mass they consider more historically authentic. At St. Mary Mother of God Parish in Washington, D.C., Monsignor Charles Pope says the Mass in Latin one Sunday a month, and it is well attended.

Monsignor CHARLES POPE (Archdiocese of Washington, D.C.): The Tridentine Mass is a form of the Mass that existed prior to 1962. Things began to change in the Catholic liturgy probably in the mid-1960s, and certainly by 1970 whatís known as the new Mass was fully in force.

There tends to be a religious tendency for the language used inside the churches to be more ancient, and I think that’s largely why Latin remained. It was the main language of the Church even after the Latin language had ceased to be spoken. 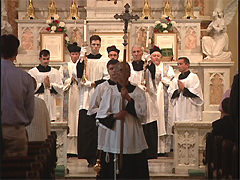 Tonight ís liturgy is referred to as a Solemn High Mass. There is a priest, a deacon, and a sub-deacon who all take part in the liturgy, and it adds solemnity to the liturgy. And they each have proper roles to fill. We also have a lot of extra servers. And itís just a more solemn form of the Mass, with an opening procession and, of course, the use of incense and so on, which is all unique to either the sung or the solemn high form of the Mass.

People of all age groups attend and that ís, I think, a little bit surprising. It was always thought that if we were to go back to the Latin it would mostly be the older folks. But one of the things that’s been discovered just about everywhere the Latin Mass is celebrated, there is a huge number of young people as well. And they didn’t grow up with the Latin, but there is something attractive about this ancient form of the liturgy — its dignity, and its sort of very just lofty quality, especially in some of its forms.

I’ve been saying this Mass for 18 years now, for all my years as a priest. There is a part of me that loves to sort of step back into time and to be part of something ancient that goes way, way back, all the way back hundreds and hundreds of years, even thousands of years, into the ancient past using an ancient language. This is a Mass that most of the saints knew.