FRED DE SAM LAZARO (guest anchor): Earlier this month in France an annual event took place that has been described as perhaps the largest public expression of traditional Catholicism in the world. It is a three-day, 72-mile pilgrimage from Notre Dame Cathedral in Paris to the cathedral at Chartres. A history professor from New York City who has made the pilgrimage several times describes the experience. 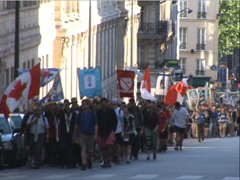 Dr. JOHN RAO (Associate Professor of History, St. John’s University, New York): My name is John Rao. I’m associate professor of history at St. John’s University. I’ve done the pilgrimage to Chartres about six or seven times. The regular preparations involve making sure you’ve got the right footwear more than anything else. Being a New Yorker and not owning a car, I walk a lot.

You’ve started from a point, Notre Dame, which has this extraordinary impact on you because of its beauty and because of the fervor of the people praying and singing in it. And what the architecture of the cathedral and the light passing through the windows does is it makes it clear that God, the Father of lights, provides us a world which was incredibly more diverse and beautiful than anyone might think.

The route to Chartres begins the first morning mostly in Paris and the surrounding areas.

When we’re talking about the people who make up the pilgrimage, the first thing to note is that probably about 70 percent of them are young people — people in their late teens and in their early 20s. There are people from all over Europe. The majority are French, of course, but from every country that I can imagine, from Africa, from Asia, from the United States.

A lot of these chapters are groups that stick together at home, and they have a lot of their own particular songs, which are not specifically religious but more focused on just subjects involving history and culture of the country as well.

It’s so clear, it’s so sunny. By the afternoon people are going to start suffering from heat. The big thing for people who haven’t done it before is to get them to drink water. 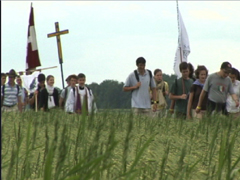 The Mass on the first day is usually in a field. The Masses that are held during the pilgrimage and at Chartres itself are the traditional Latin Mass. In other words, the liturgy before the reforms that are associated with Pope Paul VI.

You have, perhaps, certainly at least 100 priests who are hearing confessions during all of this, and they’re scattered all through these lunch scenes and in the woods and in little deserted areas.

The pilgrimage began in the Middle Ages. Chartres was always an important place and had great meaning in the life of the Christian world in the kingdom of France in the Middle Ages. Joan of Arc made this pilgrimage. Louis XIV, I believe, made the pilgrimage. After Vatican II there were — there was a lot of confusion that developed in Catholic believers’ minds about what they ought to be doing, what they ought not to be doing, whether they were putting too much of an emphasis on particular practices that somehow or other had become outmoded, and as a consequence things like pilgrimages ended up suffering. It resumed precisely due to the concerns of groups that, by this point, were calling themselves traditionalists who wanted to commit themselves to maintaining practices which they felt to be, spiritually, extremely beneficial.

The second day of the pilgrimage, the Mass is in the woods — same kind of Mass, beautiful music, priests hearing confession. 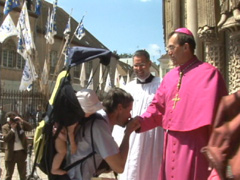 MICHAEL MATT (speaking to pilgrims): My name is Michael Matt. I’m the head of the American contingent, the American chapter for the Chartres pilgrimage.

It’s definitely a youth movement. They very easily, in many instances, can really tap into this whole tradition, the foundation of the Catholic faith. It doesn’t matter that they don’t understand every word of the Latin. They’re attracted to the centrality of the liturgy. They’re attracted to the rubric and the ritual and to the idea of suffering for what you believe in.

Dr. RAO: The entire pilgrimage is of an impact that’s hard to describe. A pilgrimage is a microcosm of what life is. Life, from a Catholic standpoint, is a pilgrimage—from birth to death, from our birth to our ultimate, eternal experience with God—and what the pilgrimage does is it takes you, for a short space of time, to a time out of time. You’re out of your ordinary daily experiences. All of the ordinary things that bother one during the course of a day just disappear, even to the point in a physical way that, after a couple of days, you don’t care what you look like.

PILGRIM: I’m pretty tired, but other than that it’s invigorating. Spiritually lifted, that’s for sure. It’s amazing to be with tons of Catholics — thousands of them. 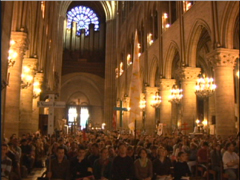 The third day, the last day of the pilgrimage, everyone is exuberant, because if you’d made it to that last day you know you’re going to make it. You know you’re really going to make it. You’re in forests, you’re in fields — endless, endless fields. You at least get to see, after a certain point, the spires of Chartres in front of you. It can become particularly grueling because it takes a long time for that spire in the distance to really get truly bigger.

There was more of a, maybe a penitential spirit yesterday, but today it’s joy. It’s just joy. When you get onto the roads, in the real suburbs of Chartres, then you can see it looming more and more, and then you begin this walk, which is a last torturous walk up this long shaded path that takes you up into the town itself. That’s when you see it there, you know, in all of its glory.

You could see 10,000, or 15,000 fervent Catholics, most of them young people, deeply committed to this traditional rite of Mass. These people who are part of the pilgrimage, and then who finish the pilgrimage with us as well, their spiritual fervor is accompanied with, again, a great love for music. By the time it’s over, the feeling of exaltation is hard to describe, just hard to describe.

The newer generation found what that old rite had to offer — spiritually satisfying, spiritually uplifting, and in a way that you could see almost in no other event that took place in the annual life of the church. The entire three days is emotional.

What to do in the future? This spirit of pilgrimage should be continued on the day-to-day basis for the rest of your life.