FRED DE SAM LAZARO, guest anchor: Few issues touch a raw nerve in American politics like gun control. It could be one reason the debate is rarely waged from pulpits. But often the issue is not far below the surface in worship communities -- particularly those hit by gun violence as correspondent Lucky Severson tells us in this report.

LUCKY SEVERSON (to Jackie Rowe Adams): And your son was killed right over here?

JACKIE ROWE ADAMS (Harlem Mothers S.A.V.E.): And my son was killed right there on the steps where my parents was living. I left them that morning. He said, "Ma." Give me a kiss. He was 17 at the time. And I -- I mean you would never imagine that he wasn't coming back home.

SEVERSON: Jackie Rowe Adams belongs to a group of women called "Harlem Mothers S.A.V.E." Their purpose is to stop gun violence. Those who belong have paid a very dear price. Each had at least on child killed by guns in Harlem. 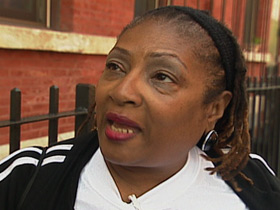 Ms. ROWE ADAMS: Eighteen years later, who would've ever imagined that I would lose another child to gun violence? A 13-year-old killed my son -- robbery. From what I understand it was robbery. Shot him one time in the head.

SEVERSON: Like many of the 41 murders in Harlem last year, most were committed with illegal guns -- double the gun deaths from a year before.

UNIDENTIFIED WOMAN: Because we were out here last summer and saw a shoot out right on the corner like it was the O.K. Corral.

SEVERSON: When her sons were killed, Jackie says at first she was angry with God but now she credits God for transforming her anger into a cause.

Ms. ROWE ADAMS: I woke up one morning and I said, "No! Enough is enough!" My husband said, "What's the matter?" I said, "I can't take it." I said, "What are the elected officials doing? What are the churches doing?"

SEVERSON: The influential Riverside Church on Harlem's West Side is trying to do something. Jackie met with Reverend Arnold Thomas to offer her group's help. He's registering churches around the country to participate in a "God Not Guns" Sabbath the weekend of September 29 and 30.

Reverend ARNOLD THOMAS (The Riverside Church, New York City): Americans need to have a serious conversation about how guns have contributed to really the destruction and the continuing demise of our way of life and our culture. 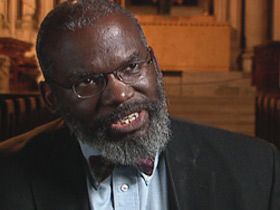 Rev. THOMAS: We're dealing with staggering statistics. And so that says to me that America is a nation at war. We are at war with ourselves.

SEVERSON (to Rev. Thomas): Why have churches been so conspicuously silent on this subject?

Rev. THOMAS: I think because churches are also political animals and we are subject to the fact that many of our parishioners advocate the use of guns.

SEVERSON: Pastor David Whitney ministers the Cornerstone Evangelical Free Church in Maryland. He says the American public would be surprised at how many pastors have a different view of guns from that of Reverend Thomas. They favor them.

Pastor DAVID WHITNEY (Cornerstone Evangelical Free Church, Baltimore, Maryland): I would say the churches should be involved in helping arm and train people to use handguns effectively.

SEVERSON: Why would you need a gun?

Pastor WHITNEY: As soon as that handgun appears, it never even has to be used. The criminal is a coward and he's going to flee as soon as he is faced with an equal power with himself.

SEVERSON: Can you understand how some might find a pastor, advocating that we all carry guns. at least offensive?

Pastor WHITNEY: Some would. I know that in my congregation none would because they understand that we have the biblical right of self-defense. Jesus said, "If you don't have a sword, go buy one" -- for the purpose of self-defense

SEVERSON (to Marcia Owen): Do you think ministers should carry guns?

MARCIA OWEN (Religious Coalition for a Nonviolent Durham): I think that that would be very counter to the message of Christ.

SEVERSON: Marcia Owen is with the "Religious Coalition for a Nonviolent Durham," which is affiliated with about 60 local churches. She organizes vigils for the victims of gun violence in her North Carolina city.

This is a vigil for 14-year old Tavisa Cartnail who was shot and killed in a drive-by.

UNIDENTIFIED MAN: She was a nice young lady.

UNIDENTIFIED WOMAN MINISTER: Some of us did not know Tavisa. But we learned about her when she became a statistic.

SEVERSON: The mother, still mourning did not attend the vigil, but her friend Sheryl Smith was there and she understands the grief.

SHERYL SMITH: My son was murdered in November 2005 in a drive-by. 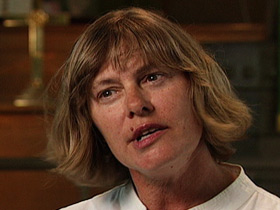 SEVERSON: Each year Durham averages about 30 murders and Marcia tries to hold a vigil after each one.

Ms. OWEN: The reason that we do those is we truly believe that before we do any advocacy or policy work that we first must do the most important thing which is to stop, to gather at the site of the homicide, and to witness to the sanctity of life and to mourn.

SEVERSON: The Durham neighborhoods where many gun murders take place are comprised mainly of African Americans.

Ms. OWEN: If this were my child and my neighborhood would this continue on? I don't think so. I know it wouldn't. Something would be done. But these communities are almost like invisible communities to us.

SEVERSON: Marcia's coalition gets involved with the inner-city community by meeting with low-income kids, urging them to stay away from guns, and also working closely with former inmates who are often the perpetrators and then the targets of gun violence in the inner cities. Peter Lamonte Bell has been working at and advancing in the city's water department ever since he got out of prison two years ago. He was in on drug and gun convictions. 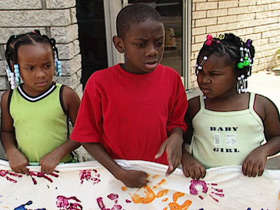 (to Peter Lamonte Bell): If I say I wanted to get a gun here in Durham, how long would it take me?

PETER LAMONTE BELL: A couple of hours. I've never been to a gun store in my life and bought a gun. It always comes from the street. A lot of the guns that are on the street, they're coming right from citizen's homes because you have citizens that have firearms.

SEVERSON: He says most inmates are not prepared to come out of prison. And without a lot of support, many end up back dealing drugs and using guns. So the coalition's "faith team" helps people like Peter get jobs and housing and their lives back together. They meet regularly.

Mr. LAMONTE BELL: I guess I have the same problem that every citizen has now, and it's paying bills and being broke. But it ain't so bad.

These are God-fearing, loving people that care -- that's reaching out to try and help you. And so, it nothing that I won't bring to my faith team. And if it's something really serious that is going on with me, I say, "Look, we need to have a meeting."

(to Ms. Owen): You are not looking to get rid of guns all together?

SEVERSON: But her objective would undoubtedly require some measures of gun control, which Pastor Whitney strongly opposes.

Pastor WHITNEY: The answer to the problem really isn't to say, "We're going to disarm the law-abiding citizens." Because then you make them vulnerable to further murder. The answer to the rate of violence in America is the full preaching of the Gospel of Jesus Christ, which changes the heart of men from sinners who disobey God's law, "Thou Shall Not Kill," to disciples of Jesus Christ who obey God's law. 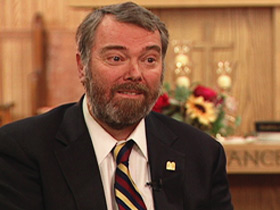 SEVERSON: That's what Jackie Rowe Adams and her group is all about -- getting rid of illegal guns by giving the NYPD information about stores or storefronts they suspect are dealing in illegal guns.

(to Ms. Rowe Adams): You've helped close down some of these businesses around here that have been dealing in illegal guns, right?

SEVERSON (to Ms. Rowe Adams): But that must be a little dangerous for you?

Ms. ROWE ADAMS: It is dangerous. But the danger is when kids get their hands on these guns, they're taking a life. So if I could help close down some of these illegal places, then my living will not be in vain.

SEVERSON: The church involvement she was hoping for is finally taking shape, and not only in Harlem. It's not an effort to get rid of guns but to keep them out of the wrong hands. But they face an uphill battle convincing churchgoers that guns issues should been given a higher priority from the pulpit.

Few issues touch a raw nerve in American politics like gun control. But often the issue is not far below the surface in worship communities, particularly those frequently hit by gun violence.