BOB ABERNETHY, anchor: A federal judge in Boston this week ordered the government to pay $101 million to two former convicts and the families of two others. Each of the four men had been wrongfully convicted for a 1965 Mafia murder. The FBI apparently helped frame the four and then withheld for decades evidence that could have cleared them. The Boston case focuses attention not only on the problem of wrongful conviction but also on the lack of adequate support for many of those wrongfully convicted and then released from prison years later. Saul Gonzalez reports from Los Angeles.

SAUL GONZALEZ: There are more than two million people serving hard time in America’s state and federal prisons. However, some of the incarcerated — how many no one really knows for sure — shouldn’t be behind bars. They are innocent people wrongfully convicted and sent to prison for crimes they did not commit. 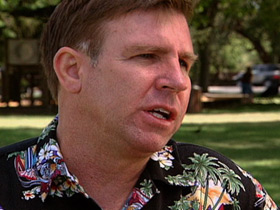 DAVID POPE: It was like a bad story from the “Twilight Zone.” The man wakes up in jail, and he keeps waking up and he can’t believe it’s really happening.

GONZALEZ: When he was 24 years old, David Pope was sentenced by a Texas court to 45 years in prison for breaking into an apartment and raping a woman. Years later DNA testing proved that Pope was not the attacker. He was finally released in 2001. But by that time Pope had already served 15 years behind bars.

Mr. POPE: I still kind of struggle with things — questions, you know, questions. Why did I have to stay in there so long, right? You know, there is a part of me that there is going to be this sadness, right, because that is just part of it. It’s like grieving for —

GONZALEZ: Grieving over this hole in your life?

Mr. POPE: This loss of years.

GONZALEZ: Pope represents a small but growing number of the wrongfully incarcerated in this country who have had their convictions overturned and then been released. These innocent men and women were convicted and sent to prison for a variety of reasons such as incorrect eyewitness identifications, police and prosecutorial misconduct, and coerced confessions. However, after surviving prison and proving their innocence, exonerated individuals often face a multitude of new challenges once they’re released.

LOLA VOLLEN (Founder and Executive Director, Life After Exoneration Program, LAEP): They come out like newborns with nothing and stripped of their identity and their dignity. And then —

GONZALEZ: And left to fend for themselves?

Ms. VOLLEN: Yes, and what they have to fend against is ongoing injustices. 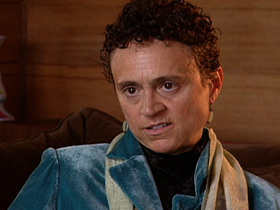 GONZALEZ: Lola Vollen is the founder and executive director of the Berkeley, California-based Life After Exoneration Program, called LAEP by its members.

VOLLEN: It’s an effort to help those whose lives have been virtually destroyed by the criminal justice system move forward in a meaningful and satisfying way, to help them heal and move forward.

GONZALEZ: Run on a shoestring budget, LAEP organizes meetings of the exonerated, where men like Herman Atkins can discuss their wrongful conviction experiences.

HERMAN ATKINS (speaking at LAEP meeting): I was tried and found guilty for two counts of rape. I was exonerated from all charges after serving 12 years of a 47-year prison sentence.

HEATHER WEIGAND (speaking at LAEP meeting): The important factor is that you guys stay in touch with each other, that you guys build a bond a fellowship.

GONZALEZ : Many of those exonerated complain that once released from prison they often receive no official apologies and compensation. Their criminal records aren’t expunged, and they have nowhere to turn to for help as they try to rebuild their lives. 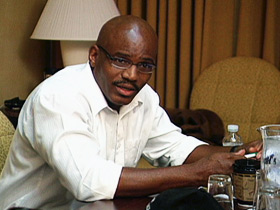 Mr. ATKINS (speaking at LAEP meeting): All of a sudden one day you’re free, and you are told to go back into society and function the best way that you can. Well, that best way I can is not good enough because I now have a criminal history that I didn’t have before. I don’t have an education needed to apply for a job that’s worthwhile having. I don’t have the funds needed to pay for basic necessities such as clothing, housing, food, transportation.

Mr. POPE (speaking at LAEP meeting): You know, I have such post-traumatic issues. It is really hard for me to resocialize and integrate in “normal society.”

GONZALEZ: Even though his innocence was proven, David Pope says he got no special treatment when he was released from a Texas prison.

Mr. POPE: They let me out at night, and there was no bus because I couldn’t go anywhere at night. So I actually came back in and spent the night in the prison so that my father could come pick me up the next morning.

GONZALEZ: And there was nothing done for you? No ride given? No money in your wallet? No change of clothes?

Mr. POPE: The change of clothes I got.

GONZALEZ: The change of clothes you got?

Mr. POPE: Because they won’t let you out there naked, and they also won’t let you walk out of there with prison clothes on, because that’s illegal.

GONZALEZ: Pope eventually won a more than $400,000 legal settlement. However, most of the exonerated individuals LAEP works with have received no compensation for their imprisonment. Only 21 states have passed legislation that allows the wrongfully convicted to seek compensation after their release. Many states that do offer settlements often cap payments, no matter how much time has been served.

Ms. VOLLEN: The U.S. has failed in its duty and obligation to help those that have been wrongfully convicted and exonerated with compensation and reparations.

GONZALEZ: How much would Vollen and other activists like to see the wrongfully convicted rewarded upon their release? 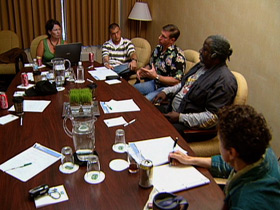 Ms. VOLLEN: The number that seems to be the settling point for a lot of people who have looked at this issue is $50,000 a year for every year that is spent in prison. It is enough money for those who have been in the average of 10 to 12 years to have a secure financial basis for a period of time in which they can acquire the skills they need to go forward.

GONZALEZ: But many of the exonerated say no amount of money can make up for the years they’ve lost behind bars.

HAROLD HALL (Administrator, Los Angeles County Bar Association): Nothing can ever make up. I mean, the money compensation can only let you live comfortably now.

GONZALEZ: Harold Hall was convicted of a double murder in Los Angeles. Sentenced when he was 18, Hall served 19 years behind bars before his conviction was overturned. Now an administrator at the Los Angeles County Bar Association, Hall says he sometimes thinks about the opportunities prison stole from him.

GONZALEZ: Pope, who is unemployed and lives with his mother in a small town north of San Francisco, has similar feelings.

Mr. POPE: How do I fit back in now out here? Let me just mention dating. You know, I am 45 now. I have been out six years. When I was released I was basically 40. I was already middle-aged. I’m dealing with middle-aged issues which are, you know, well — women my age, everybody I know, has already been married, had kids. Where do I quite fit in? Am I ready for marriage? No. There’s a lot of post-traumatic stress that can come up for me. Certain things in the free world trigger that. 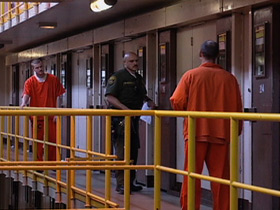 GONZALEZ: Although they don’t oppose greater help and compensation for the wrongfully convicted, defenders of the criminal justice system argue that there are numerous safeguards to prevent innocent people from being put behind bars.

Professor REBECCA LONERGAN (Gould School of Law, University of Southern California): Is our system broken? No.

GONZALEZ: Rebecca Lonergan, a former federal prosecutor, is a law professor at the University of Southern California.

Prof. LONGERAN: I do believe we have a good system. I believe that we have the presumption of innocence. We have a court system with competent defense attorneys fighting for people’s rights. We have juries generally, usually, trying to do the right thing. And I think that we a damn good system in place where we do the best that we can to find the actually guilty parties. It is just reality that mistakes are going to be made. But from what I see in 20 years, those are rare.

GONZALEZ: However, the recognition that the innocent usually stay free —

TIMOTHY ATKINS (speaking at LAEP meeting): Every morning for me, when I wake up every morning I am angry.

GONZALEZ: — is small comfort to those individuals who have spent years behind prison walls for crimes they didn’t commit.

ABERNETHY: There was a study reported this week of 200 prisoners exonerated by DNA evidence. It found that the most common cause of their original convictions was mistaken identification by eyewitnesses.