BOB ABERNETHY, anchor: This coming week (September 13), with the sighting of the new moon, Muslims around the world will begin celebrating the holy month of Ramadan. Muslims are expected to abstain from eating, drinking, smoking and sex during daylight hours. It’s also a time of increased giving to the poor. But many American Muslims say the U.S. government’s war against terror is hurting their efforts at charity. Kim Lawton has our report.

KIM LAWTON: Sudan’s war-torn Darfur province is one of the most desolate and dangerous places on earth. Anwar Khan of Islamic Relief USA has seen that desolation firsthand. Islamic Relief has several projects in Darfur’s refugee camps. On this day, Khan’s team is training women to make cooking stoves out of mud. The less often the women have to leave the camps to gather firewood, the less likely they are to be raped by roaming militia men. Khan says doing such humanitarian work is a way that he lives out his faith. 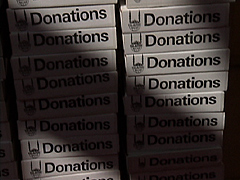 ANWAR KHAN (National Development Director, Islamic Relief USA): To us, the way that you see a Muslim is not by the size of his beard or the clothes. It’s not a fashion statement. It’s a state of mind. It’s helping others to make this world a better place.

LAWTON: But in a post-September 11 world, doing charity work has become much more complicated. In the wake of 9/11, many Muslim groups say they’ve been unfairly targeted by the U.S. government’s war against terrorism. Several Muslim charities have been shut down because of suspected links to terrorists. There’s a lot of fear among potential donors that they could come under suspicion as well.

SALAM AL-MARAYATI (Executive Director, Muslim Public Affairs Council): I think a lot of people have fear about giving, and I think it’s justifiable.

LAWTON: Muslim leaders say the situation is putting new constraints on one of the most basic obligations of their faith: helping the needy.

Mr. AL-MARAYATI: The term is called zakat, and what that means in Arabic is called “the purifying dues.” So by giving, I purify myself in the process.

LAWTON: Like praying five times a day, zakat is one of the five pillars, or core requirements, of Islam. Under the laws of zakat, Muslims must give 2.5 percent of their yearly income and total assets after their basic needs have been met.

Mr. KHAN: Like in many of the churches you have to give a certain percentage of your income to the church. The zakat is a tithe. It’s an obligation to give back to God. But you’re not giving just to him, you’re giving actually to the needy.

LAWTON: According to the Qur’an, there are specific categories of people who should receive the money. In some Muslim countries, the government automatically deducts zakat from people’s bank accounts to use for state-sponsored welfare work. Charity is especially important during the Islamic holy month of Ramadan, when Muslims believe they get extra rewards in this life and the next. 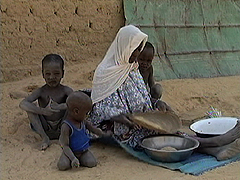 Mr. KHAN: Any act of worship we do, any good action we do in Ramadan, we have been told we will receive 70 to infinite times the number of reward. So if I smile at you, that’s a form of charity. But if I do it in Ramadan, I get 70 times the reward. It’s the blessed month.

LAWTON: Khan says it’s a good time of year for humanitarian groups like his.

Mr. KHAN: But in Ramadan, its people want to come and they want to give us money. The rest of the year we have to go to them and say, “Hey, hey, hey. People still have to eat.”

LAWTON: And so Islamic Relief sponsors a host of fundraising events, such as this concert at LA’s Shrine Auditorium, headlined by the international Muslim rock star, Sami Yusuf.

SAMI YUSUF (Recording Artist): I honestly believe that, if every human being on this planet gave zakat, just 2.5 percent, I don’t think there would be any poverty in this world.

LAWTON: Islamic Relief USA is affiliated with the U.K.-based Islamic Relief Worldwide. It’s the largest Muslim charity in America, with projects here at home and overseas. The group, like others, has come under increased monitoring from the U.S. government. Since 9/11, the Treasury Department has stepped up investigations through its Office of Terrorist Financing and Financial Crimes.

LAWTON: One of the most prominent Muslim nonprofits, the Holy Land Foundation, was shut down by the government in December 2001, and all of its assets were frozen. The group and its leaders are now on trial in Texas. Five other American Muslim groups have also been designated as supporters of terrorism. Deputy Assistant Secretary Glaser says charities are uniquely suited to be exploited by terrorists. 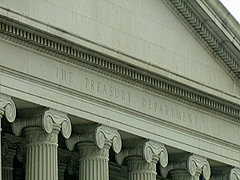 Mr. GLASER: They deal in raising money and moving money across borders often. They often deal in cash. They have perfectly legitimate reasons to be in conflict regions and post-disaster regions. So for a terrorist organization, they provide a fantastic opportunity to take advantage of.

Mr. AL-MARAYATI: Muslim charities are going through more scrutiny, and I think that’s understandable. Nobody is saying we shouldn’t, and that’s just a reality of the post 9/11 era. The question is, can we allow for a safe harbor for Muslim charities to operate under without the fear of getting harassed, targeted and shut down by the U.S. government?

LAWTON: Many Muslims believe the government has been overzealous, relying on little evidence and making very indirect connections between legitimate charity work and terrorists. There’s a widespread perception that the U.S. government wants to shut down all Muslim nonprofits.

LAWTON: The Treasury Department has released a set of charitable guidelines, but Muslim leaders are urging more dialogue between top federal officials and their community.

Mr. AL-MARAYATI: We want to develop a partnership between the Muslim community and the U.S. government. Treat us as partners, not as suspects.

LAWTON: Al-Marayati says government officials should be worried that their policies could be backfiring.

Mr. AL-MARAYATI: Now you hear stories about people, instead of giving money to a charity, they’ll just send cash overseas. And you don’t know where the cash is ending up. This becomes a source of anti-American sentiment when people view that the United States is blocking aid to a certain region where people are really in need. 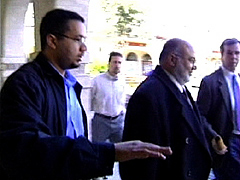 LAWTON: Islamic Relief is trying to work with the government. They just announced a new joint project in the West African nation of Burkino Faso. But Khan admits it’s a challenge to counter the perceptions.

Mr. KHAN: Many people are afraid. And we have to fight their fear. People are saying that the U.S. government won’t allow us to pay our zakat. I’m saying they will.

LAWTON: Despite the concerns, Khan says some good has come out of the government scrutiny.

Mr. KHAN: The surprising thing is that with all of the checking that’s being done, it’s increased our transparency. So the same information we give to the government, we can give to anybody.

LAWTON: In order to avoid the complications, some are urging Muslims to simply give to non-Muslim charities. But Khan says it’s vital that Islamic faith-based groups stay in business.

Mr. KHAN: We have access to communities that others don’t go, and I try to explain this to my Muslim friends that if you don’t give money to us, there’s nobody else you can give money to.

LAWTON: And, Muslims leaders say, it’s also vital that government investigations not hinder the free exercise of their religious obligations.

ISLAMIC PERSPECTIVE ON CHARITY: A COMPREHENSIVE GUIDE FOR RUNNING A MUSLIM NONPROFIT IN THE U.S. by Khalil Jassemm