BOB ABERNETHY, anchor: Religious conservatives appear to have come out of their Values Voter Summit last week (October 19-21) just as divided as they were going in. All of the major Republican candidates spoke to the gathering. So far, evangelicals have not rallied around any one candidate. Mitt Romney and Mike Huckabee were the winners of a straw poll there. GOP frontrunner Rudy Giuliani finished in eighth place. Focus on the Family president James Dobson told the group he could never vote for a candidate who supports abortion rights.

Our managing editor Kim Lawton has been following all of this.

KIM LAWTON: There’s a real, vigorous debate going on right now among religious conservatives about whether they should be embracing idealism or pragmatism. Do they support someone like Mike Huckabee who agrees with them on all their social issues, but many of them have doubts about whether he could win a general election, or do they go with someone like Rudy Giuliani, who disagrees with them on things like abortion but many people say might have a better chance of winning against someone like Hillary Clinton? So there’s a lot of disagreement about which route they should go. They’re also discussing a lot how important abortion should be. This has always been the number one issue for these religious conservatives, but should that be the only thing that they base their votes on? And some of the people in that community are saying you know what, if there are other issues that are just as important or, you know, important, we should not make abortion the only thing? But that’s very controversial within the movement. 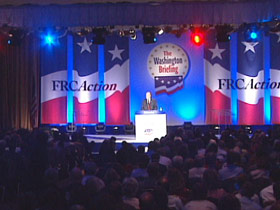 ABERNETHY: I think we should acknowledge that religious conservatives are not the only voters who insist that they have values, but back to Dobson. How much influence does he have still over this group?

LAWTON: He’s very influential among evangelicals. For decades he’s told them how to raise their children. They’ve looked to him for advice about voting. But they don’t do everything he says, and especially among younger evangelicals he doesn’t have as much influence. Many of them are pro-life like he is but also care about other issues that he doesn’t stress, things like the environment. So I think his influence isn’t as strong as it was some time ago.

ABERNETHY: Romney and Huckabee, as you said, did well in that straw poll. But it was not exactly a scientific poll, was it?

LAWTON: There was a lot of controversy about that because people could also vote online. At the summit itself Mike Huckabee was the runway winner. But when you cranked in the online votes, that’s when Mitt Romney jumped ahead, and his campaign actually worked hard behind the scenes to get people to vote online.

ABERNETHY: So what’s the next step for these folks?

LAWTON: There are a lot of behind-the-scenes meetings going on right now as they try to figure out what to do. They’ve asked their supporters to pray for guidance about how they should approach the future. They’re trying to decide, should we just go our own way in this election? Another interesting thing is that some of the Democratic candidates are sensing an opening and are really going after it, so you have candidates like Barack Obama and Hillary Clinton reaching out to these communities, trying to maybe siphon off some of those votes.