BOB ABERNETHY, anchor: Now, a special report on the fast growing number of Hispanics in the U.S. Catholic Church. Their devotional practices and fervent style of worship are giving the church a different look, and some observers expect Hispanics to make up half the U.S. church in just a few more years. Judy Valente has the story. 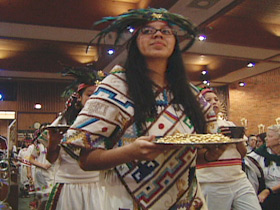 JUDY VALENTE: Many Catholics have never seen anything like this in their local parish -- an Aztec dance honoring the mother of Jesus. It is part of the observance of the feast of Our Lady of Guadalupe, the Virgin Mary, said to have appeared before the Mexican peasant Juan Diego in the 16th century. This feast day, highly important to Hispanic Catholics, is only vaguely known to much of Catholic America. But it may be a glimpse into the future of the U.S. church.

VALENTE: The distinctive forms of worship and devotion among Hispanic Catholics are practiced not by immigrants alone, but by American-born, English-speaking Hispanics as well. The intensity of their religious expression, and their growing numbers, are changing the face of the U.S. Catholic church. Estimates vary, but the percentage of American Catholics who are Hispanic is anywhere from one-third to 40 percent, and because some Hispanics don't register in their parishes -- the undocumented, for example -- some say the figure may be as high as 50 percent. What do Hispanics bring to the American church?

Friar CAVAZOS GONZALEZ: Certainly the recognition of the presence of God in day-to-day life, in what we call the "quotidiano" -- the everyday, day-in routine, humdrum of life.

VALENTE: This is the home of Martin and Victoria Enciso, Mexican immigrants who belong to Good Shepherd parish on Chicago's West Side.

VICTORIA ENCISO (Congregant, Good Shepherd Catholic Church, Chicago): From the moment you wake up, you kneel like a camel, and I wake up like a camel. You know how a camel wakes up, with both knees? I wake up praying. 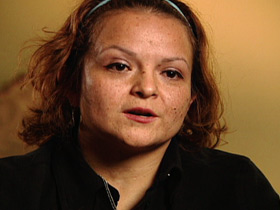 VALENTE (to Ms. Enciso): So you wake up in the morning and you immediately get down on your knees and pray?

Ms. ENCISO: And I bless my blanket that I have and the house that I have, because if you don't then what do you have?

VALENTE: The devotional life of Hispanic Catholics takes some dramatic forms. On a frigid December night people from Good Shepherd walk through the streets of Chicago, a procession in honor of the Virgin of Guadalupe. At five o'clock the next morning, their church is packed for the mananitas, an hour of singing praise to the Virgin.

Father MARCO ANTONIO MERCADO (Pastor, Good Shepherd Catholic Church, Chicago): The first thing we want Our Lady to listen to in the morning is the music from her beloved sons and daughters. So that's the meaning of the mananitas.

VALENTE: Latino Catholics do not attend Mass any more frequently than other Catholics, but there is a fervency to their worship, and essential to that worship is the Spanish language. 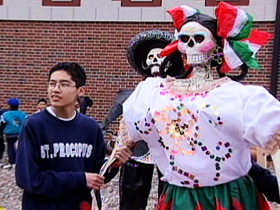 VALENTE: Processions abound. In November, El Día de los Muertos, the Day of the Dead, honors family members who have passed on. Just before Christmas, the posada depicts the struggle of Mary and Joseph to find lodging for the night. And on Good Friday, Via Crucis, the Way of the Cross, re-enacts the crucifixion of Christ, sometimes graphically.

VALENTE: -- which is why so much devotion takes place in the home. Enrique Gonzalez has been in this country 20 years, but tradition persists.

ENRIQUE GONZALEZ: We were always taught that church is part of our home, that we go to church together to pray in unity, but that we also have to be at home and pray by ourselves.

VALENTE: The living room in his small apartment has an altar to deceased family members.

VALENTE: At church, Martin and Victoria say the rosary with their four children. Martin feels that Hispanics bring a joyfulness to worship and family values to the church. No one in either of their families has ever been divorced. At home, Victoria has a collection of angels and a prayer she learned from her grandmother.

Ms. ENCISO: The angels are always around us.

VALENTE (to Ms. Enciso): What were the words of the prayer?

Ms. ENCISO: "Sweet angel, my sweet angel, pray with me. Pray for me in the morning and in the evening always. Don't ever leave me alone."

VALENTE: This neighborhood had long been Polish-American, but by the 1990s it was changing. The old parishioners were leaving Good Shepherd. In fact, Father Marco was brought in just to close it down. But since his arrival, Sunday attendance has more than tripled and is overwhelmingly Hispanic. 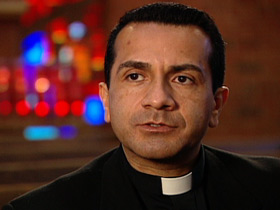 VALENTE: Those traditions include the quinceanera, sometimes called the blessing of the 15th birthday. Here, a young girl renews her baptismal promises to live out her life according to the teachings of Christ. And in a tradition of his own, Fr. Marco often invites children to the altar during Mass.

Fr. MERCADO: I explain to them we're going to bless the bread and the wine, and it's going to become the body and blood of Jesus. So for you to know exactly the moment when this is going to happen, I want you to raise your hands when I raise the host.

Ms. ENCISO: All churches follow the same Gospel, but you don't feel them. But when our pastor walks out there and he preaches the same words, you feel his energy. He comes down to us. He's there with us. I mean, he knows who he's talking to. 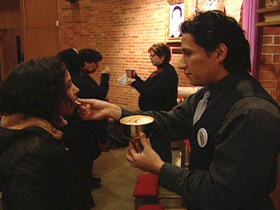 VALENTE: And yet there is a certain ambivalence toward the clergy, springing from the history of Mexico, which was both evangelized -- and conquered -- by Christians, and where Catholic priests were once repressed by the government.

Friar CAVAZOS GONZALEZ: I come from a very anti-clerical family. You know, my grandmother told me she loved me despite the fact that I had become a priest.

VALENTE: But among struggling Latino immigrants, the role of the priest is crucial. "In Hispanic culture, the priest is everything"

VALENTE: American priests are already overworked. Others have been recruited from Mexico, but the shortage of clergy in Latin America is even more severe than it is in the U.S.

Father Marco Antonio Mercado Valente: Chicago's cardinal and several of its bishops speak Spanish, but nationwide only six percent of Catholic clergy can speak the language.

Friar CAVAZOS GONZALEZ: In 20 years time, if I could dream, you know, I'd like to see 50, over 50 percent of the U.S. Catholic bishops being Latino.

VALENTE: What concerns the hierarchy right now is that many Latinos are being lured away to the passionate and emotional services in evangelical and Pentecostal churches. Some Latinos who want to remain Catholic also want the Mass to change. 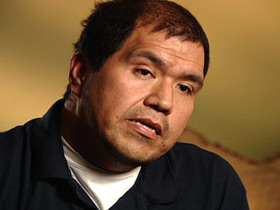 MARTIN ENCISO (Congregant, Good Shepherd Parish, Chicago): We're going to see a lot more life in church. I think life that's been missing, because I mean a lot of people, at least a lot of people I knew growing up, said, "Oh yeah, I went to church. We just sat there. We kneeled, prayed." Church is more than that. You need to feel alive when you go to church. This is the word of God.

VALENTE: There is little doubt about the growing political influence of the Hispanic clergy, especially in the now high-profile issue of immigration.

VALENTE (to Fr. Cavazos Gonzalez): Is there some aspect of what the Hispanics bring to the Catholic Church in America that might be perceived as negative?

Friar CAVAZOS GONZALEZ: We are accused of being machistas, for example, of being male-dominated, and to a certain extent we are. And yet at the same time, we're a very matriarchal society or matriarchal culture. Do those things, do those two realities enter into conflict with each other? Yes, they do.

VALENTE: Hispanics will not easily abandon their culture and their practices. How well their culture can meld with that of other U.S. Catholics will be a challenge to the parish priest. 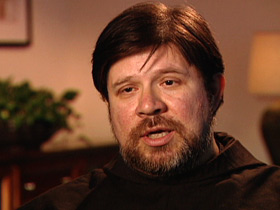 Friar CAVAZOS GONZALEZ: We're awakening the U.S. Catholic Church to the realization that it is one part of a church that is so much larger than itself.

VALENTE: Some traditional American parishes have begun to adopt Hispanic practices, though few, if any, would go so far as to re-enact the apparition of the Virgin of Guadalupe to the peasant Juan Diego, which was done recently at Good Shepherd. As for the U.S. church --

Friar CAVAZOS GONZALEZ: I don't think we'll ever have a Latino face. I'd like to think that we will have a culturally diverse face.

VALENTE: Culturally diverse, he says, but also, he hopes, united.

For RELIGION & ETHICS NEWSWEEKLY, this is Judy Valente in Chicago.

The number of Hispanics in the U.S. Catholic Church is growing rapidly. Their devotional practices and fervent style of worship are giving the church a different look, and some observers expect Hispanics to make up half the U.S. church over the next few years.