BOB ABERNETHY, anchor: Next Friday, April 4, is the 40th anniversary of the assassination of Dr. Martin Luther King Jr. at the age of 39. He was in Memphis helping sanitation workers who were on strike trying to get recognition for their union. If Dr. King were alive today, would he be campaigning for economic justice, or might he be a social conservative opposing abortion, or both? Kim Lawton has our report on the very different ways African-American ministers are trying to carry on the King legacy.

KIM LAWTON: They call him “The Rev.” He’s Reverend Lennox Yearwood, social activist and community organizer. On this day, Yearwood is in New Orleans meeting with young survivors of Hurricane Katrina and talking about how they can be a force in revitalizing their city nearly three years after the storm. At 38, Yearwood wasn’t even born when Martin Luther King Jr. was killed. But he says he’s deeply influenced by King’s dream of a better future for America, and Yearwood believes his mission is to carry that dream forward.

Rev. LENNOX YEARWOOD (Hip-Hop Caucus): Our generation at the 40th anniversary, being more years away than he actually lived — it’s something that is a calling for us as we are now the “dream generation” in the 21st century.

LAWTON: Bishop Harry Jackson is also a social activist as well as senior pastor at Hope Christian Church, a megachurch in Beltsville, Maryland. Jackson’s involved in several political causes, among them fighting against abortion and gay marriage. He, too, says King’s ministry has shaped his own.

Bishop JACKSON: King in his public persona, in his civil rights ministry, if you would, in what some would call his prophetic role to the culture, epitomized a Christian answer to civic involvement.

LAWTON: It’s been 40 years since King was assassinated on the balcony of the Lorraine Motel in Memphis. But African-American ministers across the spectrum continue to invoke his legacy as they work in sometimes vastly different ways to change the world around them.

Professor CHERYL SANDERS (Howard University Divinity School, Washington, D.C): The prophetic mantle of King did not fall on one person. It fell on a community. I think it’s important to keep that legacy alive, not just looking for one person to be the reincarnation of King. Martin Luther King really set the standard for prophetic ministry in these United States.

LAWTON: For Lennox Yearwood that means taking his convictions to the streets, organizing communities and sometimes engaging in protests and other acts of civil disobedience. The nondenominational pastor has been especially active fighting for justice for New Orleans residents in the wake of Hurricane Katrina.

LAWTON: Yearwood has frequently criticized U.S. use of torture in the war against terror, and he’s an outspoken opponent of the war in Iraq.

LAWTON: These battles, Yearwood says, are similar to the battles King was fighting at the end of his life. 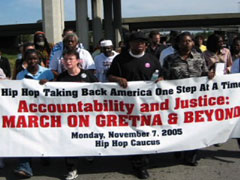 LAWTON: As president of a group called the Hip-Hop Caucus, Yearwood focuses on getting young people involved in advocacy. There was this hip-hop concert, cosponsored by Amnesty International, to raise awareness about people displaced both by Katrina and by the war in Iraq.

LAWTON: Yearwood often points out that King accomplished everything he did before the age of 40.

Rev. YEARWOOD: For me it was inspiring, because your voice can have a huge impact. The passion and the energy you have, particularly using the Gospel for change, was amazing, and he used that in a very appropriate and a very strategic way.

LAWTON: Bishop Harry Jackson tries to create social change through public platforms, from his pulpit to a broader stage. He’s co-author of a new book called “Personal Faith, Public Policy,” which examines what he calls the most urgent issues of the day, including poverty and racial reconciliation as well as abortion, religious liberty, and the family. He has a daily radio commentary heard across the nation and leads a Christian grassroots group called the High Impact Leadership Coalition.

Bishop JACKSON: I often say that the white-led church in America has been oriented toward righteousness or what I’ll call personal holiness, such as they’re against gambling, same-sex marriage. They’re against things like abortions, etc. But the black-led church, coming from King’s background or his legacy, often has been tremendously mobilized around the issue of social justice, and so what we’re saying is that these two things are being married together — righteousness and justice.

LAWTON: In his efforts, Jackson often partners with conservative white and Latino evangelicals.

Bishop JACKSON: Blacks are only 13 percent of the population at this particular point. But if blacks and Hispanics are working together, and people of faith from the evangelical community, you now have a huge, huge voting bloc.

LAWTON: Jackson says King showed that the most successful social movements have a strong spiritual base.

Bishop JACKSON: I believe that spirituality was at the heart of who King was, and for me that legacy is really, really critical.

LAWTON: As time passes, there is more and more debate about how King’s legacy might look today.

Bishop JACKSON: The foundation of King’s work really was biblical, and there’s been a great affinity with social conservatives with the Bible, values, etc. So I believe King would be a social conservative, but I’m not so sure that he’d let himself be owned by any party.

LAWTON: Yearwood fears that King’s more radical comments and activities are being domesticated.

Rev. YEARWOOD: I think, most importantly, I think that what people are getting now is a very much lukewarm edition of Dr. King, this “I Have a Dream” only, and that’s it.

Bishop JACKSON: I don’t share that concern, because at the root of it the radical side of him was the Christ-like side.

LAWTON: If anything, Jackson says, it’s the religious side of King that is being downplayed today.

Bishop JACKSON: I think our lack now in terms of black leadership, especially in our generation, is that we don’t have people as committed to a Christ-like stance, and therefore the power of their words has no conviction.

LAWTON: Professor Sanders worries that King’s legacy is all too often misappropriated by those trying to further their own agendas.

Prof. SANDERS: People who have all kinds of different political views can find something in his legacy that they can honor — if nothing else, the dream. The dream, the vision, is great and important. But the vision is grounded in an analysis of the reality, and that reality is still with us. It’s not 40 years, there’s been a lot of progress. But some things are the same.

Bishop JACKSON: Blacks still are sentenced to heavier time in prison, if they go there, than whites, that there is a problem of racial profiling, many other issues along that nature, along that line, that need to be dealt with, and those are some of the things that we’ve got to address. So King began a good work, but it hasn’t been fully manifest.

LAWTON: Still, these ministers say they are committed to seeing it through.

LAWTON: Fulfilling that dream, they say, will still take hard work on every front.