BOB ABERNETHY, anchor: We have a story today about two young men who grew up together best friends — one white, one black — and then took different religious paths. One became an Orthodox Jewish rabbi, the other a Muslim. Today they argue, of course, but as Betty Rollin reports, they’ve found their theological differences don’t matter nearly as much as friendship and laughter.

BETTY ROLLIN: A couple of old friends shooting baskets — and not shooting baskets — in downtown New York City. Charlie Buckholtz and Sedar Chappelle met when they were in grade school in Silver Spring, Maryland. Charlie was not only the new kid in school, but one of the few white kids. He was having a hard time until Sedar came along.

CHARLIE BUCKHOLTZ: Everyone respected him. He was sort of like the mayor of the school. So the fact that he kind of took me under his wing made it so that I was okay with everyone.

SEDAR: I went to summer camp, and at this summer camp I was the only black boy in this group of strangers, and I was very badly treated. So when I came back to school after the summer camp and meeting Charlie, the first thing that I did, I said, “Okay, this is the chance for me to take care of him, because I know how it feels.” 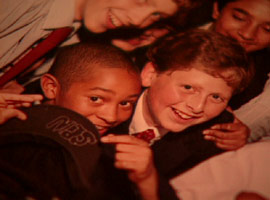 ROLLIN: The friendship grew, and at Charlie’s bar mitzvah there was Sedar, along with his later to be famous comedian brother, David Chappelle. Sedar and Charlie’s friendship continued throughout high school.

CHARLIE: I think that from the day we met each of us has always had a very profound sense that we have something to learn from each other.

ROLLIN: Then the accident.

CHARLIE: I was in this horrible car accident, and I was, I think, unconscious for a day or two, and I woke up heavily sedated with tubes in my chest.

SEDAR: They did not know whether he would live or die, and so I dropped everything, and I rushed over to the hospital as fast as possible.

MARJORIE BUCKHOLTZ (Charlie’s Mother): He got there, and I grabbed him and David, too, and we were, you know, “Let’s go! Let’s go! Let’s get in there!” And we were stopped by this enormous battle-axe of a woman who said, “Where do you think they’re going?” And I said, “Well, they’re coming in to see Charlie.” And she said, “Oh, no, no, no. It’s family only.” And I said, “They’re my sons. And, I didn’t think about it, really, but she gave me such an incredulous look, and at which point David looked up and said, “Hey, don’t you watch ‘Different Strokes’ lady?” And she let them in.

SEDAR: It made me feel very warm and very welcomed. It gave me respect for Charlie and his family for the rest of my life. 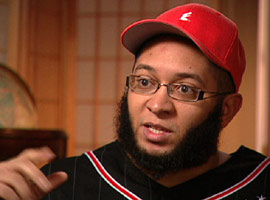 ROLLIN: Neither Charlie nor Sedar were particularly religious growing up. Not until college did they begin their spiritual journeys.

SEDAR: I was going through this religious revival for Christianity. But the way that — but the racism that was at the Christian camp, it broke my heart completely, and so I was very confused at the church for a number of years. So when I went to college I started meeting Christians and Muslims and Jews, and I began to open my mind to other religions. Charlie was doing the same thing at the same time.

ROLLIN: Charlie’s journey led him to Israel, where he became an Orthodox rabbi.

ROLLIN: Meanwhile, Sedar was exploring Islam. At first, there were new conflicts.

CHARLIE: When Sedar first started becoming involved in orthodox Islam there was definitely a feeling — he was very excited, he was a new convert, and he was definitely interested in converting me.

ROLLIN: Well, that could be very annoying. 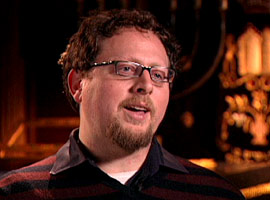 ROLLIN: There were other theological spats.

ROLLIN: But don’t you feel that way about Judaism?

CHARLIE: No, that’s not a position that Judaism takes.

ROLLIN: Sedar also differs with Charlie about the question of the afterlife.

SEDAR: In his worldview, in his values, this world and this life is much more important to him than death or the life after death.

ROLLIN: And is that what’s important to you?

SEDAR: Well, for me, this life is temporary and temporal, and the life after death is eternal.

ROLLIN: Their theological differences, far from separating them, have just given them that much more to talk about. 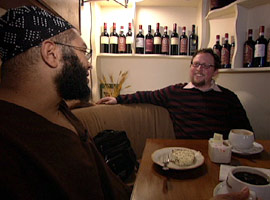 CHARLIE (talking with Sedar at restaurant): There are still strong voices and strong strains. It seems that like that people are doing very, you know, bad sort of militant actions. Would you disagree with that?

SEDAR: Yeah, I would disagree with that.

SEDAR: Yeah, I would disagree with that.

SEDAR: To me I think it’s a very small percentage of people. Most Muslims, all they care about is family values.

ROLLIN: The most important part of the friendship, they say, is the wisdom shared from each religion.

CHARLIE: When I’m going through a hard time, it’s not always easy for me to find the wisdom in my own tradition that helps me to get through what I’m going through. But if I talk to Sedar about it and, you know, he’s had a similar struggle or a similar issue, and he looks into it, and he has more clarity than I do about it because I’m suffering at that moment, so he can find something within his own tradition, some piece of wisdom, and give that to me, and it’s really a gift.

ROLLIN: Both friends have had brushes with extremists. Sedar at one point befriended John Walker Lindh before his capture in Afghanistan. And Charlie was close to a Jewish settler on the West Bank.

CHARLIE: One of the guys that I knew that I studied with for a while, and was a very, very sweet person, ended up getting involved in basically a Jewish terror cell and attempting and thank God failing to do a really horrific act. I came to understand that it’s really just a function of isolation. When you isolate yourself from other — from a diversity of people and a diversity of views, then you can just kind of build your own system, and everything is internally confirming, and everything makes sense to you, and it’s just a closed system, and those closed systems can be very dangerous.

CHARLIE (talking to Sedar at restaurant): Well, what do you think would be like a good step towards resolving that?

SEDAR: I definitely think more of this — more dialogue between you and me and Christians and Jews and Muslims and Zulus. More dialogue.

CHARLIE: You really, you feel strong about the Zulus, that they should be involved in this?

CHARLIE: You always mention the Zulus.

CHARLIE: This is why I love you.