After Pope Benedict XVI met with leaders of different faiths at the John Paul II Cultural Center in Washington Thursday evening (April 17), one rabbi flipped open his cell phone, dialed a number and, when connected to the other caller, pronounced, “I’m becoming a Catholic.” He paused, then added: “This thing started early. There were 200 people here, but we got through the program in less than an hour. They feed us, and now we’re heading home early. I’m telling you, we’ve got to send Jews to Catholic school.”

Ah, another day inside the efficient world of Pope Benedict XVI. The pope was, in fact, a half hour early to the cultural center. His speech, though typically intricate and dense, was delivered swiftly enough for none of the 150 members of the audience representing five faiths to get too antsy. Put another way, as Cardinal William Keeler of Baltimore later said, Benedict was like the cardinal’s own mother, “sweet, but clear.”

Benedict’s clear message was that interfaith dialogue must go right to the heart of theological differences if it is to lead anywhere: “Religious freedom, interreligious dialogue, and faith-based education aim at something more than a consensus regarding ways to implement practical strategies for advancing peace. The broader purpose of dialogue is to discovery the truth. What is the origin and destiny of mankind? What are good and evil? What awaits us at the end of our earthly existence? Only by addressing these deeper questions can we build a solid basis for the peace and security of the human family.” 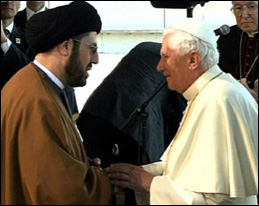 The group responded with polite applause, but it seemed the pope was not suggesting they begin such a dialogue immediately. That certainly would not have had the rabbi back to his hotel early.

Instead, young representatives of the Jewish faith, Muslims, Buddhists, Hindus, and Jains presented ceremonial gifts — a menorah, a Qur’an, a bell, an incense burner, and a metallic cube symbolizing Jain principles — and received commemorative gold Vatican coins emblazoned with Benedict’s profile in return. The pope had to go home without a Sikh gift since representatives of that faith had declined the offer to meet the pope when the Secret Service barred them from wearing their traditional and sacred kirpans or swords anywhere near the pontiff.

Several hand-selected representatives of the different faiths approached Benedict for a series of grip-and-grin photos. The Muslim leaders in that group later said they urged the pope to open more lines of communication between Catholics and Muslims.

After the public portion of the ceremony, the pope delivered a Passover message to the Jewish members of the group in a separate room. For those left behind, Dr. Sayyid Syeed, secretary general of the Islamic Society of North America, commandeered the microphone and asked the audience to come forward and offer what they had said to the pope, or what they would say if given the chance. Several Muslims spoke about urging Benedict to follow up on dialogue. Asked later if Muslims had been put off by Benedict’s private session with Jews but not Muslims, founding director of the Institute on Religion and Civic Values Shabbir Mansuri said they had not. “My reading of it is that this is him acknowledging the importance of the relationship between Christians and Jews. By doing that, I think he respects us all.”

Back at the microphone, one man in a dark tunic took a place at the end of the line. When it came time for him to speak, he was alone at the front of the room. He introduced himself as Rinchen Dharlo, a Buddhist from Tibet and president of the Tibet Fund. He said if he had had a chance to speak with Benedict he would have said, “My people are passing through a difficult period.” He went on to describe the beatings and torture his fellow Tibetans have been suffering with the Chinese crackdown on Tibetan calls for autonomy. He said, as much to the room as to the already departed pope, “Remember Tibet in your prayers.” The audience erupted in loud applause.

By then the pope had been ushered out the door, and the rest of the group was free to leave as well. After a long day of shuttles and security checks and waiting, they were eager to leave. The interfaith dialogue they had come to celebrate would have to be continued.