KIM LAWTON, correspondent: There were jubilant shouts in an array of languages as Catholics from around the globe gathered in St. Peter’s Square to meet their new pope. Many here say electing Pope Francis has brought Catholics together.

LAWTON: The fact that Cardinal Jorge Mario Bergoglio—Pope Francis—hails from Argentina has generated much excitement.

CARDINAL TIMOTHY DOLAN (Archdiocese of New York): You talk about a booster shot to the Church in the Americas, this is going to be a real blessing.

LAWTON: But it’s more than where he comes from that’s unique. David Gibson of Religion News Service says Pope Francis’s simple lifestyle is something new to the papacy. 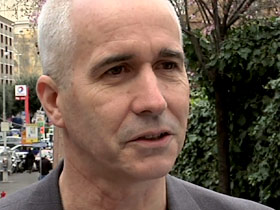 LAWTON: Many Americans came to Rome to be part of the momentous occasion of electing a new pope. Kim Daniels and Ashley McGuire say they wanted to support the Church in prayer. Before the conclave started, they worshiped at a Mass led by Washington cardinal Donald Wuerl in his titular church. Every cardinal is assigned a congregation in Rome, which in effect gives him the right to vote for the next Bishop of Rome, the pope. Wuerl’s church is San Pietro in Vincoli, which claims to have ancient chains that held St. Peter captive. Daniels and McGuire went to St. Peter’s Square every time the white smoke might appear.

ASHLEY MCGUIRE (The Catholic Association): The election of a new pope has only taken place a few hundred times over the past 2,000 years, so even to be alive during this event is something, to actually be here is truly a once-in-a-lifetime experience. And I think, you know, for many Catholics, it’s a sort of spiritual pilgrimage to be here and to receive the first blessing from the pope. 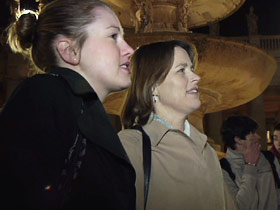 LAWTON: Daniels says she couldn’t be more excited about the selection of Pope Francis. She is confident he will work to renew the church.

LAWTON: Matthew Niggemeyer and Michael Dion are both studying theology at the prestigious Pontifical North American College here in hopes of being ordained as priests. They too say they’re thrilled with the election of the new pope.

MICHAEL DION (Seminarian): What he does is gives us an overall vision to say, to lead us to see who Jesus Christ is, and obviously every pope is going to do that in a different way. And so that will be his gift to the church is how does he help us at the ground level see who Jesus is?

MATTHEW NIGGEMEYER (Seminarian): I think it’s both an historical moment for the church but also a beautiful moment. With every papacy, there’s a new opportunity and a new chapter unfolds in the life of the church. What that chapter holds I don’t really know and I don’t really want to speculate, but I’m excited to see what will come.

LAWTON: For some, a new pope means an opportunity for new directions in the church.

DAVID CLOHESSY (Executive Director, SNAP): (at press conference) In a monarchy, the monarch has extraordinary power. 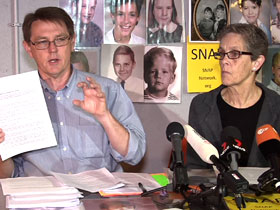 LAWTON: Representatives of SNAP, the Survivors Network of those Abused by Priests, were in Rome to push for stronger measures to prevent clergy sex abuse of children. The group released a list of 20 suggested actions for the first 100 days of the papacy. They said this is an opportunity for significant change.

CLOHESSY: We’re a single issue group, this sounds probably dreadfully self-serving to say, but we really do believe that there’s nothing on the next pope’s plate that’s more pressing than the safety of the most vulnerable members of his flock.

LAWTON: They said without new action, the abuse crisis will continue to widen around the world.

CLOHESSY: Because this is essentially like a cancer that’s eating away at the very soul of the church, we believe, and unless the pope really takes quick strong moves to turn things around, the future, especially for children in the church looks very grim.

LAWTON: Other advocates hope for breakthroughs on their issues as well. As pilgrims were awaiting the sight of white smoke from the Sistine Chapel, a coalition of women’s groups raised some pink smoke above the Vatican. They called for an expansion of female leadership roles in the Church, including ordination into the priesthood. 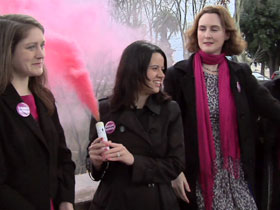 ERIN SAIZ HANNA (Women’s Ordination Conference): We would like to see some dialogue. Pope John Paul II closed dialogue on women’s ordination, so we’re hoping that the new pope will reopen that dialogue, simply talk with us. People are ready for women priests, people are ready for women’s ordination. We know the polls show that the majority of Catholics want women priests so we’re here to lift up those voices.

GIBSON: He’s a man who maintains the traditional Catholic line on sexual morality, abortion, gay marriage, contraception. Nobody expected any pope was going to change those teachings or say anything different, but a new pope has a new style and if he stresses the social justice teachings of the church, the very counter-cultural message of simplicity and poverty, that could really change things without technically changing any teachings.

LAWTON: For many Catholics, a top priority for the new pope will be addressing the Curia, the Vatican’s scandal-plagued bureaucracy in Rome. 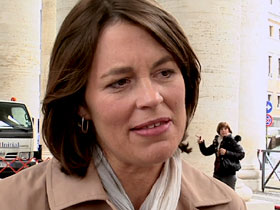 DANIELS: I think that everybody knows that there is reform needed in the Vatican bureaucracy and I know that we’ll see some effort towards that end, because reform is something that is necessary so that we can move forward and kindle the faith in places where it’s become something that’s lukewarm.

GIBSON: Pope Francis, Cardinal Borgolio had no real experience in the Roman Curia. He speaks Italian pretty well but is he somebody who can actually come in here and clean house the way some of the cardinals want? That’s a real big question.

LAWTON: McGuire is hopeful the new pope will prioritize communicating the church’s message in the modern world, especially to young people. She hopes Francis, like his predecessor, will use social media to do that.

MCGUIRE: When Pope Benedict joined Twitter, for example, he got over a million followers I think within 24 hours. And so I think you know that’s one way that he can signal to the young generation, you know, here I am, I’m going to be talking with you, I’ll meet you where you’re at and be a part of your world.

LAWTON: Among all the priority hopes and agenda setting, some are asking if the 76-year-old new pope will be able to live up to it all.

GIBSON: How much can a pope do? He’s not a pastor to 1.2 billion Catholics. So much is going to depend on the men he appoints, both in the Vatican and also in the dioceses around the world. What kind of bishops are we going to see coming out of the Vatican in the next few years? That’s really going to chart the course of the Catholic Church over the coming years.

LAWTON: The installation Mass is Tuesday here at St. Peter’s basilica. Then Pope Francis gets to work, amid all the high expectations already surrounding him. I’m Kim Lawton at the Vatican.