BOB ABERNETHY, anchor: We have a more now on a story we told in 2006. It’s about Scott Neeson, an Australian, now an American citizen, who gave up a rich life as a Hollywood movie executive to go live in Cambodia. There he helps poor children escape their lives as trash pickers and get an education. Recently, producer Trent Harris went back to Cambodia to see how Neeson and his kids are doing. The answer, as Lucky Severson reports, is inspiringly well. 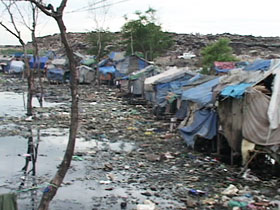 LUCKY SEVERSON: He takes this walk practically everyday through the slum that surrounds the Steung Meanchey landfill outside Phnom Penh, Cambodia. Thousands live here amidst the filth and stench.

SCOTT NEESON (with little boy): He’s playing with his own syringe here. Oy, it’s not a good idea.

SEVERSON: They spend their days picking through the chemical waste and broken glass, searching for anything of value. Human scavengers — many are children. It’s where we first found Scott Neeson two years ago.

Mr. NEESON: When I first came here, I had nightmares. I had terrible dreams for a week or two afterwards, and I think some of the things I’ve seen out here are just horrendous.

SEVERSON: Neeson first came to Cambodia on a backpacking trip in 2003. What he saw changed the course of his very comfortable life. He was a Hollywood big shot — president of 20th Century Fox International.

Mr. NEESON: It was a really glamorous life, you know, I had the Porsche.

SEVERSON: And a big house?

Mr. NEESON: Yeah, a five-bedroom home that was worth a few million dollars. I had the Porsche and a big old boat. 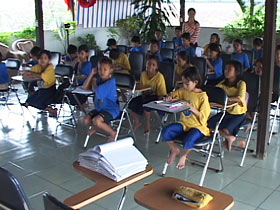 Mr. NEESON: I was a man of means and luxuries, and yet — I sort of enjoyed it, but I wasn’t particularly happy.

SEVERSON: So he started the Cambodian Children’s Fund, the CCF, a live-in school where kids from the dump can learn reading and writing and about a world they never dreamed of. It’s a sparkling place with healthy food and clean, smiling faces. His goal in the beginning was to care for about 40 kids. When we saw him last in September 2005, the number had grown to 118. Back home, colleagues like Mitch Yankowitz were still waiting for him to come to his senses.

MITCH YANKOWITZ: I thought Scott would be back in Los Angeles in 12 months, kind of the stereotypical midlife crisis for a highly stressed senior executive, but Scott really proved me wrong.

Mr. NEESON (by coconut tree): I no longer have a 401k, but I have all the coconuts I can drink and eat. It’s a tradeoff. 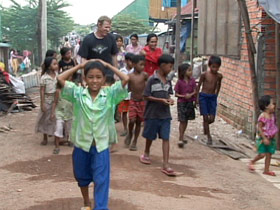 SEVERSON: They’re like his extended family. He seems to know every little kid and every mom and dad, and by now, they know him.

Today, the CCF cares for and schools over 300 children, almost 10 times his original goal, and it may be the best education Cambodia has to offer. Imagine coming from this — to this. The school uniforms were contributed by an Italian designer.

Mr. NEESON (to girl): Hey, you. Her older sister is at our vocational center right now studying to be a hairdresser, and she wants to come and join — don’t you?

SEVERSON: Neeson rose to the top ranks of Hollywood even though he never even graduated from high school. Maybe that’s why he is so obsessed with education. It drives him crazy when he can’t accommodate all the kids who just want to learn. 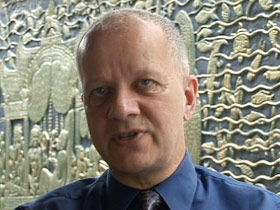 SEVERSON: Joseph Mussomeli is the U.S. ambassador to Cambodia.

JOSEPH MUSSOMELI (U.S. Ambassador to Cambodia.): I think he’s inspired a lot of people here. Even some jaded Westerners who have become cynical about everything — when they see what Scott has done in really just less than three years, they’re always just amazed.

SEVERSON: What he has done is quite remarkable, and it reaches beyond the second new school, and the third and the fourth. Neeson wants to lift the entire community out of the rubble.

Mr. NEESON: Now the kids here are learning how to bake bread. In fact, most of them bake bread easily — they’re doing croissants and the more difficult things. That’s a fabulous sign, the CCF’s Star Bakery, Phnom Penh, and this is our fabulous baker girls.

SEVERSON: The baker girls are attending the new vocational school. They bake as many as 175 loaves of nutrient-enhanced bread each day, much of which goes to the families at the dump. 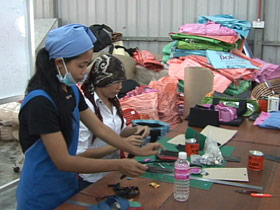 Mr. NEESON: I love this place. Right here is the makeup class. The girls are being trained for hair dressing and makeup. That’s their chosen profession.

SEVERSON: And then there are the sewing classes where kids make bags out of garbage.

Mr. NEESON: So that’s the bags themselves. This is an old fish food sack. The women and men that work here four or five hours a day working with the bags, and three hours a day learning reading, writing, English, and computer.

SEVERSON: These teenagers are also learning design. Neeson wants them to create their own clothing lines. Eight of his vocational graduates have found good paying, full-time jobs, including this young lady working in the kitchen of an upscale restaurant.

Mr. NEESON: And she’s been here quite a few months saving her money, and last month she bought the family their house and the land they’re on. 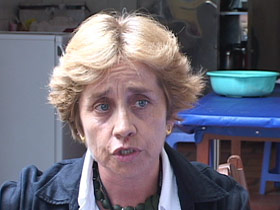 SEVERSON: Marie Cammal has worked with homeless children in Cambodia for many years. She says what Neeson is doing will make a difference.

MARIE CAMMAL: Because when you change the life of one child of Cambodia, in Cambodia that means you save at least two or three generations ahead. You give education to one boy or one girl — that means this boy and this girl will have a better job and will feed 15 people in their family, within their family, yes, but we need a lot of guys like him.

SEVERSON: What drives Neeson is the deep satisfaction he gets when he sees the transformation in these kids’ lives.

Ambassador MUSSOMELI: It’s like this is the big romance of his life. He came here, unexpectedly fell in love with the country and the people, and it has given him a reason to live.

SEVERSON: This is CCF’s new community center. Neeson like to call it the Steung Meanchey Country Club, because it’s an exclusive club. Only families from in and around the dump can be members. 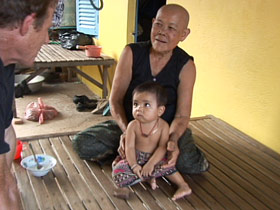 Mr. NEESON: It provides a sense of community to become a member and to be able to meet you neighbors probably for the first time. You can sit around, you can talk, watch movies, because currently there’s no sense of community. People sit under their houses, they’re drinking alcohol, and there’s a terrible, terrible level of domestic abuse.

Mr. NEESON: On the other side, of course, is if there’s bad behavior in terms of domestic violence, then we can rescind club membership.

SEVERSON: Actually, the community center offers perks some country clubs don’t — a day care center, for example. The reason most toddlers are wandering through glass and chemical waste is because mom is working at the dump and dad, if he’s around, is often drunk.

Mr. NEESON (to man): Oy, be careful there, be careful. Oh man, this kid’s got some serious parasites going on, huh? What do you do? The kid, you know, got these drunken guys here and you don’t want to hand the baby back. She needs to go to a doctor. 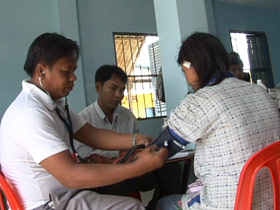 SEVERSON: What pleases him most is his HMO plan — free health care for all the families living and working at Steung Meanchey, one of the best health care plans in the country. He arranged it through an American charity called Hope Worldwide. The medical center treats everything from cuts and bruises to diseases that would often be fatal.

Ambassador MUSSOMELI: I mean, on a very grass roots level, Scott is doing more for this country. He’s changed the lives of several hundred children and probably several thousand families. When people see him they have to think good thoughts about America.

SEVERSON: Except for his fund-raising efforts in America, Neeson is focused on only one thing — giving these kids a chance. And he says as long the contributions keep coming, he won’t rest until he does.

SEVERSON: While producer Trent Harris was with Neeson at the site, he spotted a little girl who could not find a smile.

SEVERSON: Her name is Thet. At first, she was bewildered and scared, overwhelmed by all the food. This is her most recent picture. It’s why Scott Neeson left Hollywood.