Editor’s note: On August 24, 2011, Rabbi Menachem Youlus was arrested in Manhattan on fraud charges. Prosecutors accused him of selling fake Torahs and pocketing hundreds of thousands of dollars through the nonprofit organization Save a Torah. His lawyer denied the accusations, but in 2012 Youlus was convicted and began serving a four-year federal prison sentence for fraud.

TIM O’BRIEN, guest anchor: Finally, a story about Menachem Youlus, a Torah scribe who has been called the Indiana Jones of rabbis because he has traveled to dangerous places all over the world in his mission to find, rescue, and recover sacred Torah scrolls. He has delivered more than 1,000 repaired scrolls to Jewish communities, many through his Save a Torah organization. He spoke with us as he put the finishing touches on a scroll that had been buried in a cemetery near Auschwitz. The scroll was welcomed at its new home, Central Synagogue in New York City, during Holocaust Remembrance Day services this past spring.

Rabbi MENACHEM YOULUS: When we began I thought, how many scrolls could’ve possibly survived the Holocaust? Five, 10, 100? Now I know it’s thousands. I thought I would find them in old synagogues that were burnt, or places like that. Now I found out that some of them are in museums, in warehouses, churches all over the world. 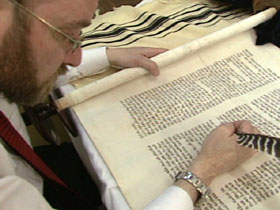 So we’re taking Torahs which have been desecrated, which have been left for dead and rejuvenating them and giving them hope in different communities that are just reviving or just starting out, and our goal is that everybody should have a Torah to pray with. A Jewish scribe is called a sofer. A quill has to come from a kosher bird. Turkey is what’s mostly used. Parchment that we use comes mostly from cow or calf. There are really three major fonts that we work with. But even within those three major fonts, there are a lot of dialects. On some of them you could get a letter within a letter, all kinds of nuances. What makes you a terrific scribe is not necessarily your handwriting. The most important thing is your total focus, your total intent, that what it is that you’re doing is only for God’s sake. If you have any other, literally anything else going on in your head, you could make that piece or that Torah not kosher.

You know, if you took an exam or one of your children took an exam, and they got a 99.99 on the exam, you’d be ecstatic. For me, I bring that home it’s a failure. It’s either perfect or it’s not. 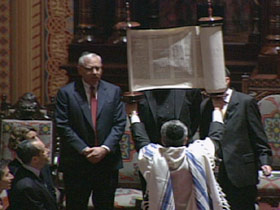 The scroll that we’re talking about right now, the Auschwitz Torah, we had to repair over 52 percent of the lettering. It’s an arduous process. When you do God’s work, it’s not about you, and it’s not about what you can do. It’s what has to be done.

It’s the 613th commandment: that every man, woman, and child should write their own Torah scroll. If somebody fills in a letter in a Torah, it’s as if they wrote the entire Torah by themselves.

Rabbi PETER J. RUBINSTEIN (Central Synagogue, New York City): The fact that we’re in New York, in one of the great communities and certainly one of the great cities, that we will make it possible for people to view the scroll, to learn the story.

Rabbi YOULUS (Central Synagogue, New York City, speaking during Yom Hashoah service): We are here today to dedicate a Torah that was once used in a Jewish community that thrived for five centuries, was buried in the city of Auschwitz for nearly 60 years, and survived the Holocaust.

Rabbi RUBINSTEIN (Central Synagogue, New York City, speaking during Yom Hashoah service): Reborn from the earth, from ashes to life, please rise and let us greet to its new home the Torah from Auschwitz.

DAVID M. RUBENSTEIN (Torah Scroll Donor, Central Synagogue, New York City, speaking during Yom Hashoah service): The Jews, when they were rounded up and put into concentration camps, many of them just took their clothes with them. But some of them took parts of Torahs, and this was the most important thing in their life, and when many of these concentration camps were liberated, the only thing that the people in the concentration camps had to give to the liberators, the American soldiers in many cases, were pieces of the Torah, because to them this was the most valuable thing that existed for them.