TIM O'BRIEN, guest anchor: Growing old, most feel, is better than the alternative. But although some of us will age gracefully, some surely will not. Advances in medical care don't always help, and treatment can be expensive and have debilitating side effects. Some doctors are now proposing that their patients consider what's being called "slow medicine," that is, trying to let nature take its course rather than aggressively fighting the ravages that sometimes accompany old age. Lucky Severson reports.

LUCKY SEVERSON: Edie Gieg looks and acts a lot younger than her age. When she's not watering her flowers or playing tennis, she works at her home business producing video biographies. She may be healthy, but the 85-year-old has given a lot of thought to what lies ahead. 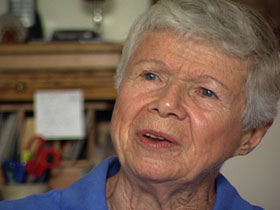 EDIE GIEG (Kendal at Hanover Resident, New Hampshire): There's a huge amount of denial of what goes on at the end of life, and most of us don't even want to face it. We'd be lucky if we died of a heart attack -- "bang" -- like that.

SEVERSON: She knows that many elderly people aren't lucky enough to die suddenly, that it is often a slow, painful progression from one illness or disease to another, one operation or hospital stay after another.

Ms. GIEG: I had had enough experience watching people go through end-of-life situations which were highly undesirable. Not the way, certainly, I wanted to end my life.

SEVERSON: That's why Edie is a supporter of a fledging movement in the U.S. called "slow medicine," a phrase coined by Dr. Dennis McCullough who has written a book about what it means.

Dr. DENNIS McCULLOUGH (Author, "My Mother, Your Mother" and Faculty Member, Department of Community and Family Medicine, Dartmouth Medical School): I had to write through my anger at the beginning of this book.

SEVERSON: Dr. McCullough is a respected geriatrician at Dartmouth Medical School. His anger and frustration grew out of years of watching elderly patients undergo surgery and treatments that may or may not prolong life and often dehumanize dying.

Dr. MCCULLOUGH: If a good death is being with your friends and family and in the comfort of your home, you need to preserve a certain amount of energy left for that. But if you give it all to fighting the side effects of these, some of these treatments, you don't have any energy left for dying. You just sort of drop off the cliff in the hospital. 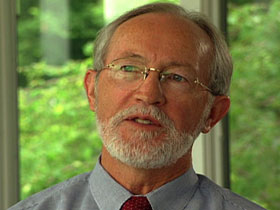 SEVERSON: Edie resides in a retirement community called Kendal at Hanover, which is affiliated with the Dartmouth Medical School and has become a kind of laboratory for slow medicine. She and her husband Charley were living here when Charley, who was 86 at the time, faced several serious health problems, including throat cancer.

Ms. GIEG: The question then came up, do we operate, remove the vocal cords, so forth, so forth? "Just keep me comfortable," Charlie said. "I'm ready."

SEVERSON: Dr. James Bernat is a neurologist who heads the ethics program at Dartmouth. He says there's a gradual change in geriatric medicine, from where the doctors make all the decisions to where the course of treatment is up to the patient or the patient's family.

Dr. JAMES BERNAT (Professor of Neurology, Dartmouth Medical School): I can tell you from my experience as a physician for the last 35 years, most people when they reach a certain age prefer something that is akin to slow medicine. Not everyone. 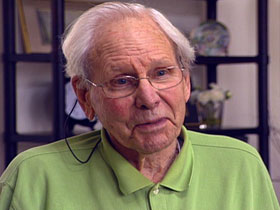 BRAD DEWEY (Kendal at Hanover Resident, New Hampshire): I think the best thing is to make that decision while you got your marbles.

SEVERSON: Brad Dewey says he still has his marbles. He and his wife Jane live in an apartment at Kendal. They decided to move here years ago because they didn't want to lose control as they lost their health.

Dr. MCCULLOUGH: As families came in and saw and heard that this was working for other people -- this idea of not doing everything right away and being more careful, reflective, getting more people involved in the decision-making -- it became a culture.

Dr. MCCULLOUGH: The faster we can run the machine, the more revenue is there, and that's guiding doctors.

SEVERSON: But the bottom line, in Dr. McCullough's view, should be America's moral obligation to take better care of its aging citizens.

Dr. MCCULLOUGH: I think the ethical answer is to return to this idea that we need to commit to being with people for that part of the journey -- to be with them, to stay with them, and to not pass people around to different things.

SEVERSON: Not everyone agrees with slow medicine or thinks it's practical. At its best, slow medicine requires a total family commitment, and not every family has the time or the money to care for their loved one the way they'd like to.

Residents of Kendal get all the medical care they need, but it costs them. Each of the 400 residents had to pay an entry fee starting at $120,000 and a monthly rent of $2,000 and up. Many aging Americans can't afford extended health care, and since nine out of 10 who live into their 80s end up unable to care for themselves, family support is important. But many families are tied up with work or can't afford help, so sending their loved ones to the emergency room is often the only way to get medical care.

Dr. BERNAT: That's an unfortunate circumstance. It's an abuse, really, of that type of treatment, because it's being done not because it's what the patient would have wanted, but for a logistical reason.

SEVERSON: Dr. Bernat says although increasing numbers of physicians are converting to slow medicine, there are some who worry that the movement could grow into a discriminatory public policy where more aggressive care is withheld. 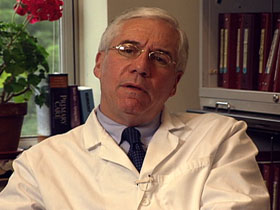 Dr. BERNAT: It's important when you consider any type of medical system, that doesn't give every single treatment that they could, that there is that risk that it could be abused by an insurance company whose interest is to reduce outputs.

SEVERSON: Brad Dewey thinks that despite his 92 years, he's entitled to all the care he can get if it means he can live well a little longer.

SEVERSON: Edie Gieg has five kids, nine grandchildren, and four great grandkids. She says if slow medicine is going to work, you have to talk to your family early, before you get too infirm to let them know what you want.

Ms. GIEG: Some of the most difficult situations occur when somebody like myself would say to their doctor, "Look, I don't want to drag on for years and years," but that person hasn't really discussed with their children what they want at the end of life. It's selfish. We should be taking care and being responsible for our end-of-life situation.

SEVERSON: If you took a vote at Kendal, slow medicine would win in a landslide. But if you asked how many are ready to opt for it today, the answer would likely be quite different.

Ms. EISEN: Some of the women play bridge, for instance, for the afternoons. That's their life. Don't talk to them about slow medicine as long as they can set up and play.

SEVERSON: Jinx says she'll think about it maybe when she's 95. Edie looks as if she'll live beyond 95, but she's not taking any chances.

Ms. GIEG: I'm at the point now where I am about to get a bracelet that has on it DNR: Do Not Resuscitate. So if I collapse in the middle of the street with a heart attack when in town in Hanover, I do not want to be hauled off in an ambulance with a lot of tubes and so forth. It's just it's my time.

SEVERSON: And, like many elderly Americans, she wants to be in control of her time.

Some doctors are proposing that their patients consider “slow medicine”. It is a practice that tries to let nature take its course rather than aggressively fighting the ravages that sometimes accompany old age.

Health Care Costs and the Elderly