FRED DE SAM LAZARO, guest anchor: Now, a report about an unusual ministry from one of the West Coast's most blighted corners. It's in East Oakland, California. It's a ministry for the homeless -- and that describes the minister too. Lucky Severson has this profile.

LUCKY SEVERSON: Sometimes there are as many as 50 homeless people, some drunk, some high, most hungry. They're here outside this empty store in East Oakland every night waiting for the preacherman.

SEVERSON: It may be one of the few things they can depend on -- religion at the corner of Foothill and Coolidge every night at 10:30. 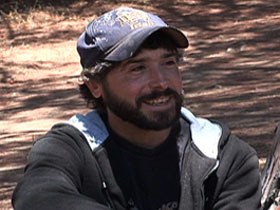 Mr. PANNIZZO (preaching): Heavenly Father we pray for the Holy Spirit to enter our hearts and to guide us, to strengthen us, to set us on the right path.

SEVERSON: They know he understands their situation because the preacherman, Vincent Pannizzo, is one of them.

Mr. PANNIZZO (preaching): In the name of the Lord Jesus Christ we pray. Amen. I despair every single day, every day, yeah. How would you like to be homeless, living on the street? You'll say, "Well, you chose homelessness." I don't choose anything. God chooses everything for us.

SEVERSON: So you think God chose you to do this?

SEVERSON: To minister to the homeless?

PANNIZZO: Yeah, I'd rather not do it but I have to be obedient to God. I can't be otherwise. His spirit is already in me.

(preaching): And God will wipe away every tear from our eyes. This is what John says.

SEVERSON: By night this is not a safe neighborhood. Pannizzo has been robbed six times, sometimes at gunpoint.

PANNIZZO: It wasn't as bad as getting slapped in the face, which happened to me a couple times. That's even worse.

SEVERSON (to Mr. Pannizzo): Slapped in the face by?

PANNIZZO: Just people who felt that they needed to get their aggressions out on a homeless guy. 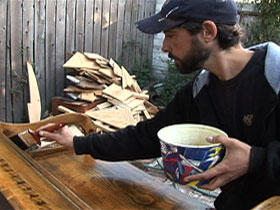 SEVERSON: Preaching on the streets was about the last thing Vincent Pannizzo imagined he'd end up doing. Religion was not an important part of his upbringing. He was an honors student in ancient history at Rutgers University. Then, when he was in his fourth year of a doctorate program at U.C. Berkeley, he started reading the Bible casually and came across a verse that changed his life in a profound way.

SEVERSON: He's been ministering to the homeless and giving them money for nine years.

PANNIZZO: (walking over to the homeless woman): What do you need exactly?

UNIDENTIFIED HOMELESS WOMAN: I need $20. You should give me $20.

PANNIZZO: Well, I don't have that.

UNIDENTIFIED HOMELESS WOMAN: Can you give me $10?

SEVERSON: Five years ago, he became homeless himself.

SEVERSON: His home now is a small camp next to a noisy freeway.

PANNIZZO: I'm over there. That's where I sleep.

SEVERSON: Oh, you're right over here?

PANNIZZO: Yeah, I'm right over there, that humble place.

SEVERSON: Humble, but neat as a pin. Next to his bedroll, his books and the candles he reads by. Vincent is the leader of this small homeless camp that includes Donna Little Moon and Melvin Bear.

MELVIN BEAR: Even though we're out in the open, we still feel safe 'cause Vinny's here, you know.

SEVERSON: This may be the cleanest homeless camp in East Oakland, a refuge for those who are scorned on the streets. Vincent teaches them to love their tormentors. 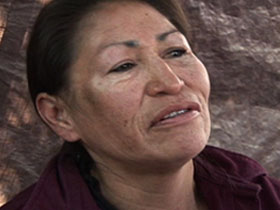 DONNA LITTLE MOON: Vinny taught us to, you know, treat them the right way. So we say, regardless of what they do, we say God bless. I say God bless.

PANNIZZO (with homeless guy on a bench): You know you're welcome at the camp, man. All right? If you have any problems, let me know, and I'll fix it, okay?

LOUISE HILL: He's like nobody I've ever met before.

SEVERSON: Louise Hill retired from the EPA after 30 years. She met Vincent when he was pumping gas for spare change and now hires him to do odd jobs. He finds some kind of work, like carpentry, almost every day.

SEVERSON: But then you end up giving away almost all of the money you earn?

SEVERSON: All of it?

SEVERSON: Bill Ward has been homeless for eight years, and he thinks many who show up here each night to hear Vincent preach are not here for the preaching but for a free handout.

BILL WARD: I was the one who told him, look, why don't you just come here for like a couple weeks, preach the word, and don't give out anything - food, blankets, you know. See who will be here.

HILL: He doesn't judge people. He doesn't say, well, I'm not going to give this person money because I know they're ripping me off. He gives money to everybody.

SEVERSON (to Mr. Pannizzo): Do you think some of them might take advantage of you?

(preaching at night): John says do not love the world or anything in the world. If anyone loves the world, the love of the Father is not in him.

HILL: He's really the only person that I know of that preaches to people that churches probably would turn away. You know, drug addicts and alcoholics, you know, even though they may not specifically go to a church, if they did those are not the kind of people a church, you know, would cater to. 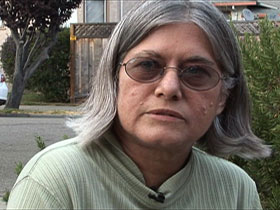 SEVERSON: It was difficult to convince Pannizzo to do an interview because, he says, he doesn't want what he is doing to be glorified. But he doesn't like to be ridiculed either by people who believe he's taken his religion too far.

PANNIZZO: I mean, it's painful. I don't like people to think that I'm nuts. I like to be treated with respect and dignity. I mean, for crying out loud, I once desired a career in academia. Now I'm a homeless guy having nothing, being a servant to everybody on the street and people thinking I'm nuts or on drugs.

PANNIZZO (handing out food to the homeless): Here you go, brother.

SEVERSON: There's little question that Pannizzo feels compassion for the people on the streets, but he says it's Christ's compassion, not his. He says he serves the homeless for his own salvation. You don't do drugs?

SEVERSON: What do you do?

PANNIZZO: Suffer. Jesus says pick up your cross and follow me and deny yourself every day. And that's what I'm doing. I'm denying myself. I'm denying myself a life here. What did Jesus say? He who seeks his life will lose it, but he who loses his life for my sake will gain it everlastingly.

PANNIZZO (handing out food to the homeless): You want some bread?

SEVERSON: He says what he's doing on the streets is no different from the many stories of personal sacrifice in the Bible, and he can't understand why people today consider it so unusual.

Vincent Pannizzo lives in East Oakland, California. He provides a ministry for those with nowhere else to go, although he himself is homeless.