BOB ABERNETHY, anchor: We have a story today about a question facing many Orthodox and Conservative Jews who eat only kosher food. Meat is kosher if it has been prepared according to Jewish law and certified so by a rabbi. But what if the plant managers were accused of unfair labor practices? Should kosher certification depend not only on how an animal is slaughtered but on how workers are treated? Lucky Severson reports from Iowa, where a kosher meat packing plant is owned and run by Orthodox Jews from Brooklyn.

LUCKY SEVERSON: This was the scene in the early hours of May 12, when authorities staged a commando style raid on the Agriprocessors kosher meat packing plant in Postville, Iowa. They arrested hundreds of suspected illegal immigrants. But then they uncovered evidence suggesting serious safety violations and child labor abuse by plant officials. People in this small town are still in shock, and the reverberations have rattled and divided the American Jewish community. It’s a debate not so much about the raid itself, but what it uncovered. Rabbi Morris Allen: 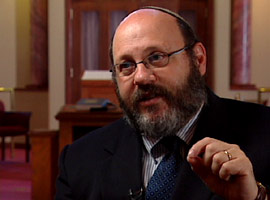 Rabbi MORRIS ALLEN (Beth Jacob Congregation, Minneapolis, MN): The Jewish community is going to have to ask, is it enough for us to be satisfied that we have kosher food on our plate? Or are we also concerned that in the fulfillment of the laws of kashrut, which is a fulfillment of a way in which we bring holiness into our lives that there has not been a desecration of people’s dignity in allowing me to fulfill my holy act?

SEVERSON: It was an odd match in the beginning in 1988 when Orthodox Jews from Brooklyn, New York showed up in rural Postville and bought the defunct meat packing plant on the edge of town. But over the years, Christians and Jews lived side by side and both sides seemed to prosper. Agriprocessors grew into the largest producer of kosher food in the U.S. Including the slaughterhouse, the plant employed over a thousand workers, with rabbis supervising the actual killing to make sure it’s done in keeping with Jewish law.

MENACHEM LUBINSKY (Spokesman, Agriprocessor, Inc.): It has to be done by a shochet, by a kosher slaughterer who is a God-fearing Jew.

SEVERSON: In fact, kosher rules are so strict rabbis like Yosi Edelstein work in kosher restaurants and markets to make certain all foods coming in meet biblical standards. 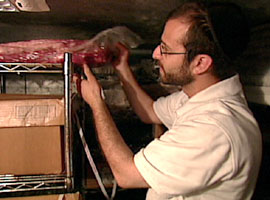 Rabbi YOSI EDELSTEIN (Caravelle Restaurant): A kosher animal is delineated in the Bible, chapter 11 of Leviticus. God says in the Bible what animals may be eaten. For example, only certain types of animals and those animals are kosher only because they have split hooves and chew their cud. Why these are the signs for kosher, we have no idea. God said it. We believe it. Simple as that.

SEVERSON: It’s believed that almost 90 percent of Orthodox Jews eat only kosher food, and around 20 percent of conservative Jews adhere to the tradition. Consumers look for the kosher label much as they do the Good Housekeeping seal of approval. So they were taken aback when the animal rights group PETA took this video and accused Agriprocessors of not slaughtering in a humane way.

SEVERSON: But the consternation over the kosher slaughter and processing of animals has grown into concern over the ethical treatment of humans, of workers, and there are some rabbis now who want to expand the meaning of kosher. 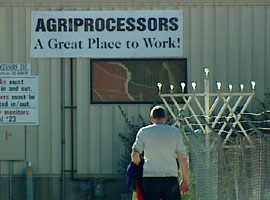 SEVERSON: Nearly 400 immigrants were charged with immigration violations. The men are still in prison or have been deported. The women, mostly mothers, wear electronic monitoring bracelets. And it’s left to religious leaders, like Father Paul Ouderkirk of St. Bridget’s Catholic Church, to feed and care for the moms and kids.

Father LLOYD PAUL OUDEKIRK (St. Bridget’s Catholic Church): The more I talk about it, the madder I get, because we’re going into our fifth month of this. They have these women with no money, no income. Plus they need food, and shelter, and so on. So Immigration is asking us to pay for their being incarcerated right on the streets of this town.

SEVERSON: Father Paul introduced us to Rosa Samora, mother of two daughters whose father was taken to a Missouri prison. For five months she has been wearing an electronic monitoring bracelet, leaving her unable to work or to leave town. 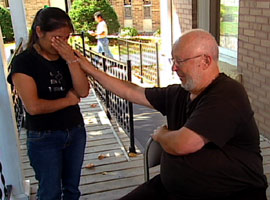 Father OUDEKIRK: She said, “There isn’t much I can do because I, because I depend so much on the charity of the church here.” So even if her husband were deported, she wouldn’t have enough money to go with him.

SEVERSON: The Agriprocessors raid was the biggest of its kind in U.S. history. Company spokesman Menachem Lubinsky questions the government’s motives.

Mr. LUBINSKY: I’m not going to be the one to accuse anyone of being that selective to pick on that company because of the way they look. Maybe they look like Hasidim, maybe they’re Jewish. I’m not going to deny that their very entry into Postville, Iowa wasn’t under the most friendly terms. I believe that there was something here that just didn’t add up.

SEVERSON: But Rabbi Allen, who leads a Conservative congregation in Minneapolis, says he doesn’t think Agriprocessors was targeted because it’s operated by Orthodox Jews, but because they treated their workers poorly. He points to the over 9,000 criminal misdemeanor charges authorities have filed against the company for, among other things, hiring underage workers and putting them in hazardous jobs. Rabbi Allen visited the plant before and after the raid. 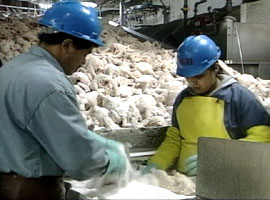 Rabbi ALLEN: People shared with us unbelievable stories of pain and suffering that they endured because they had no choices. If they raised their voice, they could have been deported back, and they really didn’t have any place to turn to.

Mr. LUBINSKY: The government’s going to have to prove that the management knew every day that these people were of underage. Remember, the imperative for these people was they wanted to make money. They wanted to help their families, and as in every immigrant group, they’ll do anything under the sun to get those jobs and to bring money into the house.

SEVERSON: Rabbi Allen says Leviticus details kosher laws, but there are equally important laws about the treatment of workers in Deuteronomy 24.

SEVERSON: Rabbi Allen is pushing a plan to add an additional symbol to the kosher certification — a “justice” certificate that says the kosher product meets biblical, ethical standards as well. He says he’s received enthusiastic support for his justice certificate from rabbis across the religious spectrum, but certainly not all.

Mr. LUBINSKY: I think it’s more that the Orthodox feel, look, we are — we’re the basic customers. We buy this product 365 days a year. We’re interested in kashrut the way it was for 3,000 years. We’re not interested in redefining it. 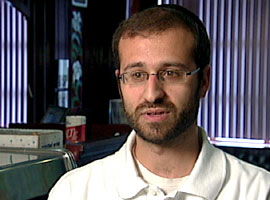 Rabbi EDELSTEIN: In America there are plenty of labor laws to deal with that, and if the government is not doing enough to enforce it, then you just have to step up what the laws are doing already.

Rabbi ALLEN: It’s a religious concern, and we should never leave to the government those issues that are the responsibility of a particular religious community to address.

SEVERSON: Even though some Jewish leaders are opposed to the notion of a justice certificate, the idea may be gaining steam among Jewish consumers.

Ms. ERHLICH: I discussed it with my rabbi, and he’s not happy about putting this into a solid written down kind of thing. Certain things should be done without having to put them down, and yet behind this movement I think there is something worthwhile.

Rabbi ALLEN: This is a major undertaking. This is the first time that a religious community has staked, has set out to say that it is possible to demonstrate that good corporate citizenship is something that can be rewarded from a religious point of view.

SEVERSON: The Agriprocessors plant has hired a new person to run its operation with promises to make things better. The plant itself is not operating nearly at capacity because not enough people can be found to do the unpleasant work, and the illegal immigrants are still waiting to learn their fate.