DEBORAH POTTER, guest anchor: Winning the Catholic vote could be the key to victory in the swing state of Pennsylvania where Jewish voters are also being courted. The contest in working-class areas of the state like Scranton is particularly intense, as Lucky Severson reports.

LUCKY SEVERSON: Mary Kate Culkin is a single working mother in Scranton, Pennsylvania, and a devout member of one of the largest religious voting blocs in the U.S.

MARY KATE CULKIN: I’m a Catholic. I went to Catholic school. I went to a Jesuit college. I’m pro-life, but I also believe that I should not instill my views on the masses of other people. 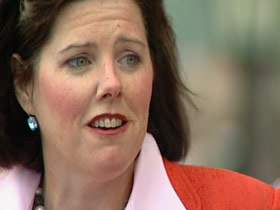 SEVERSON: She is a Democrat, first for Hillary Clinton, now for Barack Obama even though Obama is pro-choice and the Catholic bishop in Scranton wrote a letter saying that voting for a pro-choice candidate amounts to endorsing murder. But Mary Kate says the Democratic Party best reflects the ideology of Catholic social teaching, such as caring for the poor and working for the common good. Abortion is not the only important issue for her, although it seems to be the most important issue for many Catholic Church officials.

George W. Bush won the Catholic vote in 2004 even though his opponent John Kerry is a Catholic. Almost one out of three voters in the Keystone State are Catholics.

Mary Kate thinks the selection of Senator Joe Biden, a native of Scranton, as Obama’s running mate will help the campaign even though the Scranton bishop recently said Biden shouldn’t even ask for Communion because he is pro-choice.

Ms. CULKIN: I also think that what happens in church on Sunday and while you try and live that message for the rest of the week, the issues that come up on Monday morning are not abortion. They are feeding your kids or stretching that paycheck, or getting gas in your car, or shipping a kid off to Iraq. We temper what we hear on Sunday with what we have to do for the other six days of the week.

SEVERSON: In the Pennsylvania primary here in Scranton, Hilary Clinton trounced Barack Obama three to one. A lot of those were Catholic working class voters who identified closely with Hillary. The Obama campaign has been trying to swing those voters over to his column, but it hasn’t come easy. 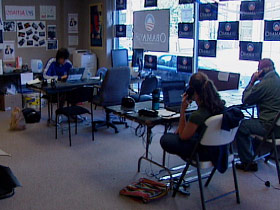 Obama is not going to give up the Catholic vote this year without a fight. The Obama campaign office downtown is humming with volunteers, many of them young, handing out pamphlets, manning the phone banks. It’s a busy place.

The McCain campaign office is not so busy. We had to wait for workers and voters to show up. That’s not to say that the McCain campaign is not active and determined to hold Scranton. Listen to Paul DeFabo, another Catholic, strongly in favor of John McCain.

PAUL DEFABO (Vice Chairman, Luzerne County Republican Party): He is going to win. You know, I’m not afraid to make that statement.

SEVERSON: Paul DeFabo is a real estate agent and the vice chairman of the Luzerne County Republican Party. He was recently extolling the virtues of Sarah Palin on public television station WVIA in Scranton.

Mr. DEFABO (in an interview on WVIA-TV): She’s a real talent, this woman. She’s a real talent. She’s a quick learner. She will handle this job. She knows what she’s talking about, and for them to compare Senator Obama with her lack of experience, I don’t even know where their argument comes from. 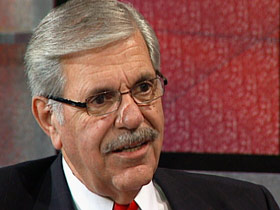 SEVERSON: DeFabo says as a Catholic his biggest concern is abortion. He’s also upset at illegal immigration. Choosing a president who will appoint the next Supreme Court justice to overturn Roe v. Wade is important to him. He has attended eight Republican conventions and says this last one was extraordinary because of, you guessed it, Sarah Palin.

SEVERSON: DeFabo’s enthusiasm for McCain and Palin is matched by his disdain for Obama, and he can’t understand why Catholics could support him, especially nuns.

Mr. DEFABO: There are a group of nuns that are pushing for Obama. I don’t understand that at all.

SEVERSON: It drives you crazy?

SEVERSON: DeFabo says he’s not happy about it, but he thinks race will play a role in the outcome of the election in Pennsylvania and in other states. 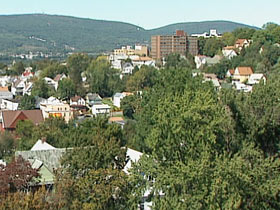 Mr. DEFABO: Yes I do. I’m being honest. I think it does. I’m not saying it’s going to happen. I’m just saying it’s a good possibility it can happen. Is it fair? Absolutely not. Should it be an issue? Absolutely not. But are people human beings? You know, our frailties and mistakes and whatever reason they think, yeah, it’s true.

SEVERSON: Mary Kate Culkin says she is certain that after Scranonites get to know Obama, race won’t be an issue.

Ms. CULKIN: I think he’s got more in common with the working people here in Scranton than initially they believed, and I think they are starting to come around and see that it doesn’t matter what color you are. We’re all pretty much the same.

SEVERSON: Although Jews make up only two percent of the U.S. population, they do get out and vote, especially when it comes to issues like the security of Israel. That’s why so many of them, including Lori Lowenthal Marcus, were here at the United Nations protesting the visit of the president of Iran.

This is Elie Wiesel:

Professor ELIE WIESEL (during UN Speech in New York): President Mahmoud Ahmadinejad of Iran is a threat to world peace. He should not be here in New York. His place is not here, but in Europe, in Holland in a UN prison cell.

SEVERSON: Lori is a mom, a lawyer, a writer, and always was a pro-choice Democrat until Sept. 11, when terrorism became her defining issue.

LORI LOWENTHAL MARCUS: I am a registered Democrat, and the reason why is that I believe in a lot of ideals of the Democratic Party. But since 2001, I have begun to focus on foreign policy. McCain and Palin are much better on national security and foreign policy, more in line with mine, and I don’t trust Obama in those areas. 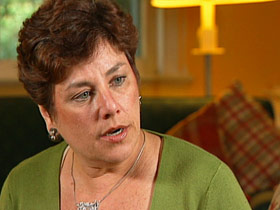 SEVERSON: Jewish votes have almost always heavily favored Democratic presidential candidates. In 2000, Al Gore got nearly 80 percent of the Jewish vote. Four years later, John Kerry received 75 percent. But Obama has been struggling, and Lori thinks it’s because, among other things, he said that after lower level negotiations he would be willing, as president, to sit down with leaders of countries like Iran without preconditions.

Ms. LOWENTHAL MARCUS: We’re all in great danger from Islamic fundamentalist extremism and terrorism. So it’s not just Israel. Israel happens to be, I hate this expression, the canary in the mine. They’re first. Ahmadinejad has said repeatedly, “We’re going to wipe Israel off the face of the map.”

Senator BARACK OBAMA (D-IL, speaking to American Israel Public Affairs Committee): As president, I will never compromise when it comes to Israel’s security.

SEVERSON: She says she’s not worried about Sarah Palin assuming the presidency because she would inherit John McCain’s advisors.

SEVERSON: Unlike Sarah Palin, Lori is pro-choice and in favor of gun control. She’s very worried about the economy, but again, the threat of terrorism trumps all.

Ms. LOWENTHAL MARCUS: I know people who have lost their jobs. It’s terrifying. But the idea of an entire nation being wiped off the face of the earth — if we are not alive, doesn’t matter how much money we make or what kind of job we have.

SEVERSON: Not far from Lori’s house, David Broida, a writer who also runs a tennis center for kids, is a devoted Jew for Obama. He was there at the convention. Broida supports Obama for the same reason that Lori opposes him. 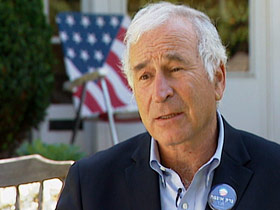 DAVID BROIDA: I am just as concerned about Israel, Israel’s security, but in my judgment Barack Obama is the better candidate on Israel for American voters.

SEVERSON: Why is that?

Mr. BROIDA: We’re interested in negotiations. Israel is in a very precarious position, with Iran being armed with nuclear weapons probably or going to be. So we need to be thinking in terms of diplomacy, and we need the best diplomatic team out there.

SEVERSON: He worries that Sarah Palin would inject religion into government, violating one of the more important Jewish concerns — the separation of church and state. Broida is worried about the sorry condition of the economy but says it should not be the only issue that drives Jews to the polls.

Mr. BROIDA: From a Jewish point of view, it’s more about the environment than it is about the economy. We shouldn’t go into the voting booth and vote our own economic interest. We should listen to the Torah, and we should listen to Jewish values. We will all get along with the economy, more or less. I know the Great Depression was devastating, and I know the current economic crisis is serious. But I know that global warming and the environmental damage that it can cause is more serious.

SEVERSON: We were surprised to hear voters themselves raise the race issue. Broida worries that it will also be an issue among Jewish voters.

Mr. BROIDA: In most instances, Jews are not bigoted in a way that would get them to vote one way or another. In this case, Jews are just like other Americans, white Americans in general. There’s going to be a certain percentage of those Americans who will not vote for a candidate on the basis of race.

SEVERSON: If history repeats itself, whoever wins Pennsylvania will have a very good chance of winning the election, and winning the Catholic and Jewish vote will be crucial to winning Pennsylvania.