Last week, RELIGION & ETHICS NEWSWEEKLY released a pre-election survey with the United Nations Foundation that looked at religion and America’s role in the world. Our survey also had a special focus on evangelicals ages 18-29. We found that they are more liberal than their parents on several issues, but there were some important exceptions. Kim Lawton has our report.

KIM LAWTON: At Solomon’s Porch in Minneapolis, they’re trying to build a church community that brings a fresh approach to Christianity. Many of the young evangelicals who worship here are bringing a fresh approach to their politics as well. They very emphatically proclaim they are not part of the religious right. 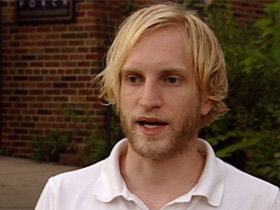 BEN MYRICK: I’m one for moderation. I’m not one for going all out in one direction left-wing or right-wing. I don’t think it accomplishes anything.

JULIE KURTZ: There’s, I think, so much tied up in the right-wing that is corrupted and power-oriented, and so, so far from what Christ came and spoke about.

LAWTON: Evangelicals are the single biggest bloc of religious voters. For more than 20 years, they’ve largely focused on two main issues: abortion and the traditional family. And they’ve overwhelmingly voted Republican. But significant generational changes may be afoot — changes that could have ramifications for the American political landscape.

LAWTON: Calvin College in Grand Rapids, Michigan, is one of the most prominent evangelical colleges in the country. Students here tell us they’re concerned about a broad spectrum of issues. Nineteen-year-old sophomore Emily Daher is active in politics and has been working to reduce the influence of money on the electoral process. She says she does believe abortion and gay marriage are important, but they aren’t the things she’s focusing on this election. 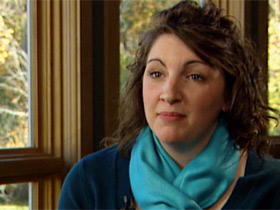 EMILY DAHER: There are so many issues that, as a Christian, I’m being called to help with as well. And I feel specifically in this election we have the war in Iraq, we have this economic situation, we have health care, we have all these issues that are really being pushed and really need help with.

LAWTON: Daher says she’s particularly concerned about the environment. In our survey, nearly 60 percent of young evangelicals said that combating global warming is extremely or very important to them, and nearly 80 percent supported an international treaty to end global warming.

Ms. DAHER: As a Christian, especially the environment is really important to me, because I was put on this earth in God’s creation to take care of the earth and be a steward to the earth. And if we don’t take care of it then we’re just letting this beautiful, wonderful creation from the Lord just go to waste.

JONATHAN MERRITT (Southern Baptist Environment and Climate Initiative): I’m pleased to be here, happy to be here at Calvin College.

LAWTON: Twenty-six-year-old Jonathan Merritt has been rallying young evangelicals to the environmental cause. He’s the son of James Merritt, a well-known pastor and former president of the Southern Baptist Convention. The younger Merritt says he became convinced about the issue at a Baptist seminary.

Mr. MERRITT: I was sitting in a theology class, and my professor was teaching on the revelation of God and made the statement that when we destroy God’s creation, which is a form of God’s revelation, it’s similar to tearing a page out of the Bible, and that struck me. It was a real shift of perception for me. It really changed the way I thought about the subject. 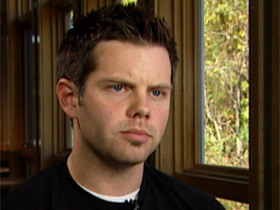 Mr. MERRITT: You’ve got those who tend to hog the microphone in the religious right who are speaking in a way that is inconsistent with the way that the average American in your everyday church really, really believes.

LAWTON: Gay advocacy groups are hoping to take advantage of the opening. Soulforce Q has been on what they call the Equality Ride, crisscrossing the country in a bus hoping to generate dialogue at Christian campuses such as Dallas Baptist University.

CAITLIN MACINTYRE (Soul Force Q): Here, at these schools, the next generations of Christian leaders are being educated, and so we think it’s really important to speak to them now to get this idea out there in the open and to be talking about it so that they are aware of it.

LAWTON: Younger evangelicals may be more liberal on several issues, but they are in line with older evangelicals when it comes to abortion. Our survey found that young evangelicals are as solidly against abortion as their parents. One-quarter think that abortion should be illegal under every circumstance. But they have a broader definition of the pro-life agenda. Sixty-three percent of young evangelicals agreed that poverty, disease and torture are also pro-life issues. 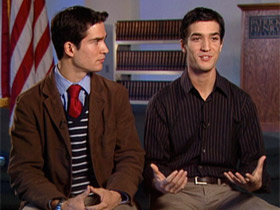 ALEX HARRIS (Co-author “Do Hard Things”): Life begins at conception. I firmly believe that. But I also believe that life doesn’t end at birth. And so for me, you know, caring for life doesn’t mean I just care for the unborn. It means I care for that child after it’s born.

BRETT HARRIS (Co-author “Do Hard Things”): Well, I think what’s exciting is you see young evangelicals really recognizing that it’s inconsistent to care about the baby in the womb, but not also about the AIDS orphan in Africa.

LAWTON: Alex and Brett Harris are 20-years-old and attend Patrick Henry College in Virginia, a conservative Christian college where most of the students were home schooled, just like they were. About three years ago they began a movement called The Rebelution, which urges young people to change the world around them.

Mr. B. HARRIS: Young people today are passionate. They see problems in the world around them and they have compassion. And sometimes they have creative solutions. And we see throughout history, we see today that God can use young people to do incredibly big, hard things and make a huge impact.

LAWTON: They do care about a wide range of issues, including global poverty and disease.

LAWTON: But they disagree that this makes them political liberals. 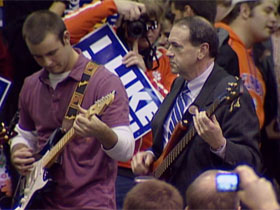 LAWTON: During the primary season, the Harris twins were big supporters of Mike Huckabee, a conservative who also talked about poverty and the environment. They were instrumental in recruiting actor Chuck Norris to the Huckabee team.

CHUCK NORRIS (Actor): All of the sudden, I started getting emails from college kids, and especially two from Oregon. Did you just hear from them? Yeah, the Harris twins. Yeah, they — Alex and Brett — emailed us and told us about Mike Huckabee.

Mr. A. HARRIS: Well, one of the things that really was so refreshing about Gov. Huckabee for us was that he did bring a different tone to the campaign. As he always said, “I’m a conservative but I’m not mad at anybody about it,” and we thought that was brilliant.

LAWTON: Now they’re supporting John McCain, because despite their wide array of issues, abortion is still number one for them.

Mr. A. HARRIS: Being pro-life is not enough to qualify a candidate to be president. But it is enough to disqualify them.

LAWTON: At Calvin, Emily Daher says she’s supporting Barack Obama because of his stands on the issues she’s prioritizing: healthcare, the environment, and the war in Iraq.

Ms. DAHER: I find him as a very exciting new candidate to put into the White House, and maybe we can see some positive reform in the United States political system.

LAWTON: The overall political implications of these generational changes are unclear. A majority of young evangelicals are still supporting John McCain, although at lower margins than their parents. 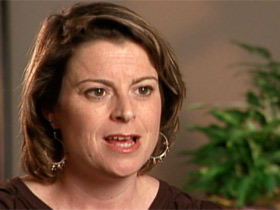 LAWTON: And pollster Anna Greenberg says given the size of the evangelical electorate, even small losses will pose big political changes for the Republicans.

Ms. GREENBERG: They now win about, you know, 75 percent of the evangelical vote. So when the evangelical vote, say, goes down to 65 Republican, that actually makes a big difference in a very close election. As these younger evangelicals get older and make up a large proportion of the electorate, I think that Republican candidates are going to have to find they’re going to have to be a little broader in how they communicate with them in order to sort of keep them as part of the coalition.

LAWTON: For many young evangelicals, it comes down to being very specific about how they apply their faith to their politics.

LAWTON: And that could change the face of American politics.

Survey: Religion and America’s Role in the World