KIM LAWTON: Rabbi Shea Harlig is on a mission to get Jews to embrace a more traditional practice of their faith. As an emissary of the Chabad-Lubavitch movement, he works nearly nonstop. He leads prayer services and Torah studies.

DINA HARLIG: OK, now. When I come in you’re going to be sitting in a circle.

LAWTON: He and his wife, Dina, sponsor a Jewish school for children, and they promote keeping a kosher diet. The rabbi is waging his campaign in what may seem an unlikely mission field — Las Vegas, Nevada.

Rabbi HARLIG: Once you get away from the strip, it’s like any other city, except that you have slot machines in every grocery store.

LAWTON: The Harligs are part of a vast and sometimes controversial effort aimed at Jews in every corner of the globe. It was the vision of the late Chief Lubavitch rabbi, Menachem Mendel Schneerson, who led the Lubavitch movement for more than 40 years. Lubavitchers simply call him “the Rebbe.” 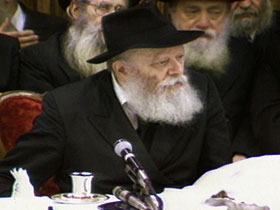 Rabbi YEHUDA KRINSKY (Chabad-Lubavitch World Headquarters): The Rebbe established what you might call an outreach program decades ago with the intention to reach out to the Jewish people wherever they are, whoever they are regardless of background, to teach them about their faith.

LAWTON: Schneerson emphasized traditional Hasidic teachings, strict religious observance, and deep mysticism. He also preached that the coming of the Messiah, “the Moshiach,” was near.

Rabbi HARLIG: The Rebbe has established that we should usher this age when godliness will be revered to all, and the struggle between good and evil will cease, and there’ll be true peace in the world. So we look at our goal of bringing Jewish people closer is that they should fulfill their mission. This is one of the ways we could hasten, to speed up the coming of the Messiah.

LAWTON: Like other Hasidic groups, Lubavitchers fled persecution and political upheaval in Europe, bringing their 18th-century way of life to 20th-century America. They established a flourishing community in Crown Heights, Brooklyn, which has become the movement’s international headquarters. While other Hasidic groups maintained a strict focus inward, the Rebbe instructed his followers to spread the Chabad-Lubavitch vision outward.

Rabbi KRINSKY: He often said he could not rest until every Jewish child, every Jewish person was afforded a proper Jewish education to know how to live as a Jew and as a human being. 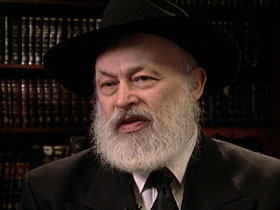 LAWTON: Married men and women called “shluchim”— emissaries — were dispatched around the world to establish Chabad centers, even in places where there were only a few Jews. They call themselves the Rebbe’s Army, and they’ve enlisted for life.

UNIDENTIFIED MAN (speaking at event): ... to gather together all of us together to gain this friend, to be true soldiers in the Rebbe’s Army.

LAWTON: There are more than 4,000 emissary couples in 47 U.S. states and 73 foreign countries.

LAWTON: Roll calls at Lubavitch meetings, such as this women’s conference, show their massive reach. There’s a special emphasis on Eastern Europe and the former Soviet Union, where the Lubavitch movement has its roots.

LEAH MINDLE LIPSZIC (Emissary to Crimea): Most of the people in the country through 75 years of Communism were totally, totally deprived of any knowledge of Judaism.

LAWTON: But emissaries are also in other challenging places. They’ve led special services in Nepal, and they’ve lit a Hanukkah menorah in Las Vegas. Such a mission field was just what Shea and Dina Harlig were looking for when they arrived more than a decade ago, shortly after their marriage. There was no kosher food, no ritual bath, little Jewish education. So the Harligs set to work. Today, they’ve opened a new $1.5 million Chabad center with regular prayer services in a “shul” or synagogue and a “mikveh” — a bath for women’s monthly purification rituals.

Rabbi HARLIG (speaking to customer): Keep kosher? Are you keeping — are you learning about kosher?

LAWTON: Rabbi Harlig is now the local kosher foods supervisor. Several grocery stores sponsor entire kosher foods sections, and there are several kosher restaurants, including a Chinese restaurant, Shalom Hunan. They established the Torah Tots preschool, and a Desert Torah academy with grades K through 4. The instruction is both secular and religious. Most of the parents are non-Chabad Jews. 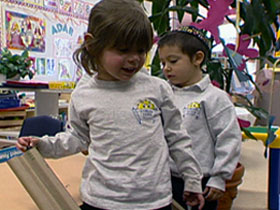 Ms. HARLIG: We have the parents really involved as much as we can, and we explain a lot what we do — whatever program we do — we always have them understand what’s going on.

LAWTON: Rabbi Harlig teaches Jews that observance and good deeds are a way to enhance spirituality and connect with God. Lynn and Arne Rosencrantz are members of the Conservative congregation who’ve participated in Rabbi Harlig’s classes and donated to Chabad projects.

LYNN ROSENCRANTZ (Chabad Supporter): They make me hungry to learn more. They encourage me and motivate me to learn more about Judaism, to be a better Jew, to aspire to be the best kind of Jew that I can.

LAWTON: But Lubavitchers also generate especially because of their Messianic beliefs. Schneerson died in 1994. He had not designated a successor. Lubavitchers believe he is still guiding them. Every year, people flock to his gravesite in Queens where they seek his intervention for miracles. Chabad leaders say every “shaliach” or emissary continues to be inspired by the Rebbe.

Rabbi KRINSKY: I would say that there’s not a shaliach in the world who — and all the members of his or her family — that don’t feel the Rebbe constantly looking over their shoulder. His blessing is almost palpable. The success is so phenomenal.

LAWTON: At the time of Schneerson’s death, some Lubavitchers believe the Rebbe himself was Moshiach — the Messiah. That belief has persisted and apparently grown, something that offends many Orthodox Jews. 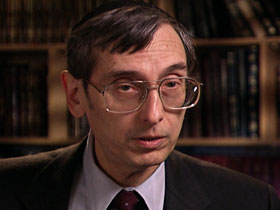 Rabbi DAVID BERGER (Professor of History, Brooklyn College): The belief that the messianic mission of the true Messiah would be interrupted by his death and burial in an unredeemed world is a position which Jews rejected, and rejected vigorously, vehemently. I believe that the belief itself is a betrayal of Judaism.

LAWTON: Chabad leaders are very reluctant to publicly discuss the extent to which Lubavitchers believe Schneerson was the Messiah.

Rabbi KRINSKY: We live in a free country. People can believe what they — whatever they want. But it is certainly not an obligation upon anyone to campaign or to point fingers at anybody, saying that this is Moshiach, this is potential Moshiach or whatever. I think it’s dangerous, actually. People don’t understand what the whole concept of a Moshiach is really about. It’s a delicate subject, and they can get lost in the quagmire.

Rabbi HARLIG: It’s possible. Who is it going to be for sure? I don’t know. Most important thing is let’s do our work, let’s bring as many Jews as possible back to our sacred tradition, and the Messiah will show up, and whoever it’s going to be it’s going to be, as long as he finally comes.

LAWTON: And Rabbi Harlig says he’s doing what he can to see Las Vegas get ready for the Messiah’s arrival.

Rabbi HARLIG: My hope is that Moshiach should be here and the strip will be turned into big yeshivas — rabbinical schools. And I envision all the big hotels with the thousands of rooms is going to be rabbinical students studying. That’s my vision.

The Chabad-Lubavitch movement formed decades ago with the intention to reach out to the Jewish people, regardless of background, to teach them about their faith.