KIM LAWTON: It’s the season of Santa Claus, and it seems he’s everywhere. Children anxiously await the arrival of Santa who is, of course, bearing gifts. But some Christians are worried that most of those children, and their parents as well, don’t know who “jolly old Saint Nicholas” really was.

Canon JIM ROSENTHAL (Founder, UK/USA St. Nicholas Society): St. Nicholas was a real person — not a fairy, not someone who’s flying through the sky with reindeer, but an actual person who lived and worked and died and had a full life. He had a Christian life because he was actually a bishop, a pastor. 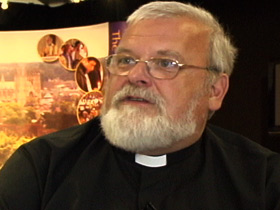 LAWTON: As director of communications for the worldwide Anglican Communion, Canon Jim Rosenthal was always on the lookout for images of bishops. He says he was captivated by a fourth-century bishop named Nicholas. Now Rosenthal helps lead an international movement urging churches to reclaim Saint Nicholas.

Canon ROSENTHAL: I believe that Saint Nicholas and his tradition is something that needs to be recovered and now.

LAWTON: Rosenthal is founder of the UK/USA Saint Nicholas Society.

Canon ROSENTHAL: The children are getting these that say “I met the real and true Santa Claus and Father Christmas.”

LAWTON: Every year, he dresses up like Saint Nicholas, complete with the bishop’s staff called a crozier and his distinctive hat called a miter.

Canon ROSENTHAL: I have to decide if I wear one of those miters or this miter. This is the most pretty one.

Canon ROSENTHAL: If we don’t recover this tradition, I believe that we are going to eventually lose Christmas, any semblance of a religious Christmas.

LAWTON: Nicholas was born in Asia Minor when the new Christian faith was beginning to spread across the Roman Empire.

Canon ROSENTHAL: He came from a very wealthy family. His parents died at an early age. His uncle was a priest. That was the undivided church in those days. There was no Roman Catholic Church or other kinds of churches — one church. And he became a priest like his uncle.

LAWTON: Nicholas rose to leadership in the early church and was named Bishop of Myra, a city on the southern coast of what is now Turkey. During a time of persecution by Roman Emperor Diocletian, Nicholas was imprisoned for his outspoken faith. He was eventually released and continued his ministry until his death on December 6 in the year 343.

Canon ROSENTHAL: He was known for his generosity and his good will because he was very rich. He literally, by the end of his life, gave away all of his fortune. Many stories talk about the fact that he was so generous that he became known as the Gift Giver.

LAWTON: More and more churches in the US and the UK are finding ways to keep the Saint Nicholas stories alive. For example, the Episcopal Cathedral of Chicago hosted a special Saint Nicholas exhibit. 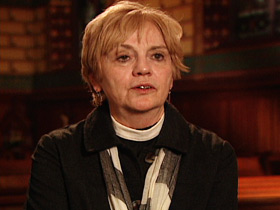 Reverend JOY ROGERS (St. James Cathedral, Chicago, IL): The stories of Saint Nicholas are wonderful stories of a bishop who cared about his people, who cared very much about the poor.

Rev. ROGERS: My guess is that some of the fanciful stories that have moved into the realm of legend and miracle had their roots in very concrete acts of very real kindness and generosity.

LAWTON: One of the most famous stories involves a poor family who couldn’t afford marriage dowries for their three daughters.

Rev. ROGERS: The parents were going to have to sell them off into slavery or into prostitution or whatever, and Saint Nicolas came by the house at night and dropped off three bags of gold coins.

LAWTON: Some legends say he secretly tossed the bags of gold through an open window, and one landed in stockings or shoes that were drying by the fire, thus launching the tradition of the Christmas stocking. Pawnbrokers have especially embraced that story.

Canon ROSENTHAL: If you go to a pawnbroker shop you’ll see three gold balls. Those represent the three bags of gold, which we now turn into chocolate coins that Saint Nicholas threw through the window to save three girls from slavery or prostitution. 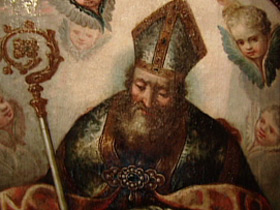 LAWTON: Nicholas has been adopted by many groups beyond pawnbrokers.

Canon ROSENTHAL: So many people love him, and so many people wanted him as theirs that he’s the patron saint of almost everything: unwed women, children, which of course is the most prominent; pawn brokers; sailors and merchants and cookie makers, apothecaries. You just name it, and he’s got something to do with it.

LAWTON: Many European countries have a long tradition of celebrating the Feast Day of Saint Nicholas on December 6. Then Saint Nicholas evolved into Santa Claus and got all tied up with Christmas.

Canon ROSENTHAL: If you look at the name Santa Claus, you will see its “Santa” means saint, and “Claus” is simply an abbreviation from the “Nicholas.” But the reality is he became a secular image.

SANTA (reading to children): Not a creature was stirring, not even a mouse. The stockings were hung by the chimney with care, in hopes that Saint Nicholas soon would be there.

LAWTON: American writers and advertisers helped disseminate a new myth that made no mention of the jolly old saint’s religious connections.

LAWTON: Church leaders emphasize that Saint Nicholas’s generosity was motivated by his Christian faith. The saint was following Jesus’ commands to love others, help those who are suffering, give sacrificially, and to do one’s good deeds in secret. They say Nicholas is a reminder that Christmas is really about the coming of Jesus.

LAWTON: Nicholas may have been called the Gift Giver, but Christians teach that on Christmas God gave the world the ultimate gift — Jesus .

Canon ROSENTHAL: Symbolically, as a Christian leader St. Nicholas is pointing, like other Advent stories, pointing towards this event called Christmas, which as Christians we believe is the most wonderful night of the year.

LAWTON: And that, they say, is the true meaning of Saint Nicholas. I’m Kim Lawton reporting.