LUCKY SEVERSON: This is the notoriously tough maximum security Sing Sing Prison in New York State. About 1,800 prisoners are incarcerated here, most for very serious crimes.

UNIDENTIFIED WOMAN (pointing): The stone building down there.

It is a forbidding place, not where you would expect to find a program offering an accredited master’s degree in professional studies in religion. 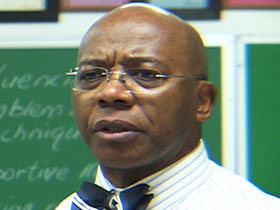 Dr. EDWARD HUNT (Professor of Pastoral Care and Director of Prison Program, lecturing class):  We are always trying to remain in our comfort zone.

SEVERSON: The course is sponsored by the New York Theological Seminary. It’s been at Sing Sing for a quarter of a century. So has the instructor, Edward Hunt.

SEVERSON: The course, which is nondenominational, gets funding from churches, foundations, and individuals. In 26 years, about 350 student inmates have graduated. Those attending this year’s class are serving an average of 15 years to life. Robert Wooley has been on the inside 21 years for kidnapping.

ROBERT WOOLEY (Inmate, Sing Sing Correctional Facility): I beat up a guy named William Eboly and basically drove him around while I cleaned out his bank accounts in an effort to sustain a drug habit that is, was, unsustainable, you know, and it’s a shame that I’ll have to live with it for the rest of my life because this man deserved none of what I did to him, and I can only hope that some day I can, you know, face him and apologize to him.

VICTOR HARRIS (Inmate, Sing Sing Correctional Facility):  I’ve noticed I have more of these little doors that I put a lot of my emotional stuff in. 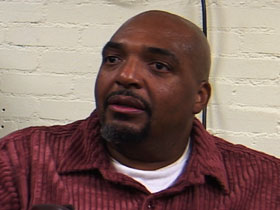 SEVERSON: The men we spoke with all seemed relieved to talk about their crimes and to say they deserved to be punished. Only 16 students are accepted each year after they have earned bachelor’s degrees, usually through correspondence courses from accredited colleges. They have lots of time to study and think.

Mr. WOOLEY: I don’t care what we’re going through, what battles we’re fighting. We always have the option to do the right thing. It’s a matter of deciding I want to change, and once you make that decision to want to change, to go about it full-fledged.

Mr. HUNT: You got to say to yourself I ain’t doing this anymore. I’m sick and tired of being sick and tired, and I want to do something with my life.

SEVERSON: Charles Garner is in 20 years to life for murder.

Mr. GARNER: Thirteen years ago, I took a man’s — a young man’s life by the name of Bernie Chapman. We got into an argument, and the end result was I shot a rifle into a house, and Bernie Chapman lost his life.

SEVERSON: Garner had dropped out of high school, but in prison he earned his GED and then his bachelor’s degree, and now he is working on his master’s.

Mr. GARNER: I know that I was going to come to prison for a long time. I mean, there was no getting around that. I made up my mind not to leave prison the same young man that I entered prison.

JULIO MEDINA (Executive Director/Founder and CEO, Exodus Transitional Community, speaking to inmates during class):  But I’m saying, did we do our two hours of library time? 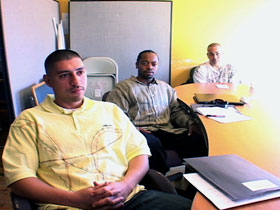 SEVERSON: If these men share a role model, it is Julio Medina. Before he became a visiting instructor, Julio was one of them. He spent time for dealing drugs and then worked his way into the New York Theological Seminary program.

Mr. MEDINA: The seminary — New York Theological Seminary master’s degree program for me, when I was in that classroom, was the — one of the single most important turning points in my life.

SEVERSON: When he got out and met the real world, Julio ran head on into the same kind of obstacles confronting most of the 600,000 ex-cons who reenter American society each year.

Mr. MEDINA: I mean, transition is one of the scariest things I think I’ve ever encountered in my life — to come home, to start again a new life, a life that you don’t know.  It’s kind of this rebirth. You’re coming home and saying, now what is employment like, because I never worked before in my life. You know, how am I supposed to act on a job? How do I act with my family?

EXODUS INSTRUCTOR: If you notice, on your Exodus contract you’ll see “goal.”

SEVERSON: So he founded the Exodus Transitional Program in East Harlem, his old neighborhood, upstairs from the Church of the Living Hope. Ex-cons come to Exodus for counseling from other ex-cons on how to learn to look for a job and keep it, drug counseling, how to get identification. Nationwide, about 60 percent of inmates who get out are back inside within three years. Of those who go through Exodus, only one in three go back.

SEVERSON: Julio says Exodus works because he and all the other counselors are ex-cons, so they understand what their clients are up against.

Mr. MEDINA: I demand the best possible work because not only the degree, but it’s in preparation when these guys come back to the community. They’re leaders. They’re being prepared to be leaders in their community.

SEVERSON: The chances of an inmate getting into a program like this one are slim to none. The majority of U.S. prisons offer very few rehabilitation programs, although they are growing slowly in popularity. The superintendent at Sing Sing, Louis Marshall, says there aren’t nearly enough rehab programs in the prison systems. 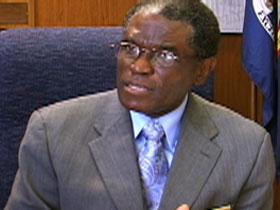 LOUIS MARSHALL (Superintendent, Sing Sing Correctional Facility): If possible, we should do more. We should do more. Housing people is probably one of the saddest things. People are going to think — they’re not going to stop thinking because they’re in prison. The question is what do you introduce in their lives while they’re incarcerated? It’s not only the individual that you’re helping. You’re helping him plus others who are observing his conduct, behavior, and change.

SEVERSON: Superintendent Marshall says it costs between $35 and $40,000 a year to house an inmate at Sing Sing, and taxpayers keep paying when they keep coming back.

Mr. MARSHALL: So, therefore, if you’re going to invest, because you are investing whether you believe it or not, you either invest in them staying or you invest in them preparing to go back out. Which way you want to put your money?

Dr. HUNT (lecturing class): We need to learn how to function on the outside for our own selves personally.

SEVERSON: The recidivism rate among the master’s program graduates is about 8 percent, far below the national average. At least six grads have gone on to become ordained clergymen, and a majority goes into some kind of church-related work.

VICTOR HARRIS (Inmate, Sing Sing Correctional Facility):  It’s good that I’m dealing with it because it’s allowing me to fill the wounds up with joy.

SEVERSON: Victor Harris is serving 25 to life for second-degree murder. He says he’s learned it is possible to change.

Mr. HARRIS: I think college in general can change people’s thinking, so they can change the way they respond and act to things. But I’ve transformed. I think a lot differently.

SEVERSON: It’s one thing to get inmates to actually change. It’s another to get others to believe they have.

Mr. WOOLEY: For a guy as bad a drug abuser as I was, you know, many people don’t believe it. That’s a fact. My own brother doesn’t believe it, you know. So it’s a real pain in my heart that he’s stuck with me for all the years when I wasn’t doing the right thing, and then like when I finally do make a change, it’s like I cried wolf. 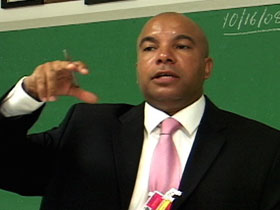 Mr.MEDINA (lecturing class):  It’s through those same wounds that we are able to reach out and heal others.

SEVERSON: Julio’s drumbeat theme to his captive students is that they owe a debt to society, and serving a sentence does not pay it.

Mr. MEDINA: We are obligated. We owe something. You know, I don’t care what you say or whatever it is, we owe something to this community. We just can’t go back and say, okay, we did our time. Everything is fine.

SEVERSON: Julio was honored by President Bush and his wife Laura for his role with the Exodus program. He’s now working on his doctor’s degree. But he’s worried that the dismal economy will mean even less funding for programs like his and the New York Theological Seminary.

The notoriously tough maximum security Sing Sing Prison in New York State is a forbidding place, not where you would expect to find a program offering an accredited master’s degree in professional studies in religion. The course is sponsored by the New York Theological Seminary, and it’s been at Sing Sing for a quarter of a century.

Prisons and the Mentally Ill