BOB ABERNETHY, anchor:  This week is the 150th anniversary of the birth of Sholem Aleichem, the writer best known for the stories that inspired the musical “Fiddler on the Roof.” Sholem Aleichem wrote in Yiddish, the everyday language of Eastern European Jews, and he wrote about everyday Jewish life in Tsarist Russia in the late 19th and early 20th centuries. Betty Rollin has our report.

BETTY ROLLIN: “Fiddler on the Roof,” which opened on Broadway in 1964 to rave reviews and continues to play all over the world, was based on Sholem Aleichem’s stories about “Tevye the Milkman.” It was the first successful portrait of the miseries and joys of Eastern European Jewish life. 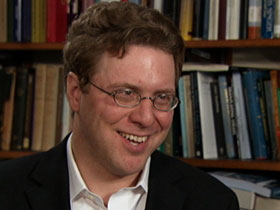 Professor JEREMY DAUBER (Yiddish Department, Columbia University): We have “Fiddler on the Roof” in Hindi, and we have “Fiddler on the Roof” in Japanese, so clearly the stories that Sholem Aleichem told, even translated, have this universal appeal, and I think a lot of it has to do with the way his stories talk about the appeal of tradition and the struggle of maintaining tradition in a rapidly changing world.

THEODORE BIKEL (Actor and Singer): Sholem Aleichem doesn’t only appeal to Jews. I get non-Jewish audiences who find parallels in what he wrote and how he wrote. I ask them, “What does this play mean to you?” Pogroms, Jews, Russians, turn-of-the-century shtetls —“What does that mean to you?” And they said, “Tradition.” We know what that is. We know what it is when children don’t want to follow the tradition of their parents.

ROLLIN: Sholem Aleichem not only wrote volumes of short stories but novels, plays, and poetry, even an autobiography, all originally written in Yiddish, the everyday language of Eastern European Jews.

Mr. BIKEL: Sholem Aleichem is the quintessential folk writer from him you glean everything that there is: how people lived, what they ate, what they didn’t have to eat, how they suffered, what their joys were.

ROLLIN: Sholem Aleichem’s characters survived through grit and through humor.

GARY BRINTZ (actor playing Mendel, the rabbi's son): Rabbi, may I ask you a question?

GARY BRINTZ:  Is there a proper blessing for the Tsar?

JOEL BERNSTEIN:  Mmm, a blessing for the Tsar.  Of course. “May God bless and keep the Tsar—far away from us." 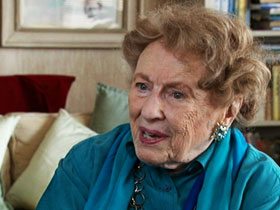 ROLLIN: His writing was full of Yiddish curses learned from his sharp-tongued step-mother, and even they were funny. The writer Bel Kaufman is his 97-year-old granddaughter.

BEL KAUFMAN (Writer): One curse Sholem Aleichem made up was the indirect curse: “May he lie down in the cemetery and have you for a neighbor.” He wrote as if he was talking to you.  His monologues—even in his novels he’s just chatting with you very informally, and he wrote about the human condition everywhere, and his humor was a sort of thumbing the nose at adversity, losing everything but winning the argument.

ROLLIN: The character Tevye even argues with God, who was a constant presence in his life.

TEVYE: Dear God, you’ve made many, many poor people.  I realize of course it’s no shame to be poor. But it’s no great honor either. So what, what could have been so terrible if I had a small fortune?

ROLLIN: Going back to Abraham, the Jews have a tradition of arguing with God.

TEVYE (singing): …if I were a wealthy man! 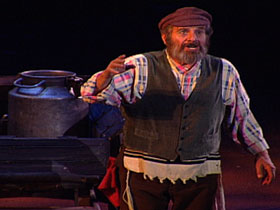 Prof. DAUBER: I would say that often asking the questions is an important part of coming to a greater faith, and Tevye ultimately maintains his faith, and that, I think, is Sholem Aleichem’s optimism and his own traditional sensibility.

ROLLIN: In his own life Sholem Aleichem became a rich man by marrying a rich woman, but they lost their money in the Kiev stock market. But he made use of his personal loss in his writing. One of his characters goes broke and is ever trying to recoup.

Ms. KAUFMAN: It was a difficult life for him. I just know from his stories, from “Menachem- Mendl,” which makes that kind of loss funny — a great gift, making something funny out of a disaster.

ROLLIN: That was his gift?

ROLLIN: And he was gifted as a grandfather. Bel Kaufman still treasures this letter he wrote to her in 1915, a year before he died.

Ms. KAUFMAN: “Dear Bellitchkah, I’m writing you this letter to ask you to hurry and grow up so you can learn to write — so you can write me letters.  And in order to grow up it’s necessary to drink milk, eat soup and vegetables and fewer candies. Regards to your dolls.  Your papa Sholem Aleichem loves you very much.” I did grow up. I did learn to write — not in time to write to him.

ROLLIN: Sholem Aleichem spent his last years in New York. He never got rich again but he did become famous and was much loved. Over 100,000 people showed up at his funeral, and a yearly memorial continues to this day.

Ms. KAUFMAN: He left a remarkable will. It’s printed in the great ethical wills, in which he asks on the anniversary of his death to have family and friends come together and read his funny stories aloud.

Mr. BIKEL: Wherever I die, I should be laid to rest not among the aristocrats, the elite, the rich, but rather among the plain people — the workers, the poor, so that their simple graves would adorn mine, just as the ordinary people have during my lifetime added honor and beauty to me, their folk writer.

Sholem Aleichem is a writer best known for the stories that inspired the musical “Fiddler on the Roof.” He wrote in Yiddish, the everyday language of Eastern European Jews, and he wrote about everyday Jewish life in the late 19th and early 20th centuries.