BOB ABERNETHY, anchor: We have a moving story today on reconciliation in Rwanda.  In 1994, for 100 days while the world looked away, one group slaughtered another at the rate of 10,000 a day.  This Spring for another 100 days Rwandans are reliving what happened with public trials and the unearthing of mass graves. There is also repentance, forgiveness, and hope.  Lucky Severson reports on Rwanda’s recovery and one of the remarkable men who’s helping lead it.

LUCKY SEVERSON: The dormant volcanoes that loom over the hazy Rwandan countryside can erupt as suddenly and violently as the country itself did 15 years ago. Over a million Rwandans, about an eighth of the population, were massacred in one of the worst cases of genocide in recent history. Then the volcanoes were silent, and it seemed that only the gorillas that live alongside of them were safe from slaughter.

Today Rwanda is a much different place thanks, in part, to this man—Anglican Bishop John Rucyahana 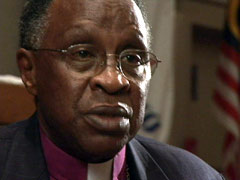 Bishop JOHN RUCYAHANA (Chairman, Prison Fellowship Rwanda): People are smiling because they have the hope, but the wounds and the healing is a process that we’ll continue to engage deliberately to tell people that they just can’t cover it up. We need to be able to unearth it and deal with it head on.

SEVERSON: That’s what the bishop has been preaching from the pulpit of his beautiful church in northern Rwanda since the killing stopped: deal with it head on. And it was personal for him. How could it not be after so many members of his extended family were murdered, including his niece?

Bishop RUCYAHANA: I have forgiven those who killed my niece, and they peeled off the flesh off her arms to the wrist, and they left bare bones, and they gang-raped her, and I forgive them because forgiving is not only benefiting the criminal, it benefits me.

SEVERSON: There are still tens of thousands of people convicted of genocide in Rwandan prisons, but as many as 30,000 have been released back to their communities through a restorative justice program that Bishop John chairs called Prison Fellowship Rwanda. These criminals, shown in a Prison Fellowship video, killed their neighbors and even there friends. 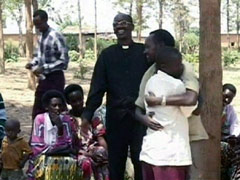 ANNOUNCERS VOICE (in video): Eighty-three-year-old John Hebian Berriff lost 187 family members in the genocide, yet he has forgiven all those responsible.

UNIDENTIFIED WOMAN (in video): The only child I had was killed but I have forgiven so I will be free and I will have peace in heaven.

SEVERSON: Prison Fellowship sends ministers into these penitentiaries to preach repentance, and then after a long period of counseling, if the killer repents, the victims, those who are willing, are brought into the prison to meet the perpetrators face to face. And then, if the victims can find forgiveness in their hearts, the process of redemption and healing begins.

JOHN HEBIAN BERIFF (in video): You killed my wife with my child. I will not do wrong to you. I forgive you.

SEVERSON: There had been a simmering hatred fermenting in Rwanda ever since it gained independence from Belgium in 1962. The Belgians designated Rwandans with at least 10 cows as Tutsis and those with less than10, by far the larger group, as Hutus. Tutsis became the ruling, privileged class, and when the Hutus came to power they began to exact their revenge. And then for 100 days, beginning in April of 1994, as the world and the United Nations sat idly by, Rwandans killed each other at the rate of 10,000 a day. 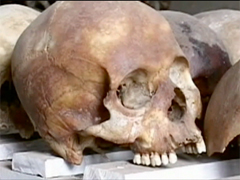 Bishop RUCYAHANA: I knew I was not going to get the gun and go on a rampage and shoot people as a bishop or as a clergyman. But I was bitter. I was seeking a bitter judgment on them.

SEVERSON: And then he says he remembered the story of the crucifixion.

Bishop RUCYAHANA: You know, when Jesus Christ was still hanging on the tree nails were still into his palms and feet, and he was naked, and he was being mocked by Pharisees underneath the cross, he did not wait for the pain to subside. He cried to the Father, “Forgive them for they don’t know what they are doing.” The fact that Jesus called within the pain is a guide and a teaching for us to forgive.

SEVERSON: Pastor John Richardson of the St. Peter’s Anglican Church in Birmingham, Alabama, has visited Rwanda four times, has seen what forgiveness and repentance can do.

Pastor JOHN RICHARDSON (St. Peter’s Anglican Church, Birmingham, AL): They have come to repent of their sins, and as part of that repentance they’re telling people where they can find their loved ones, and so they’re still digging up the bodies and laying them to rest, and these families were laying their loved ones to rest after 12 and 13 years. But it just occurs to me that for them there’s finally now some sense of closure. 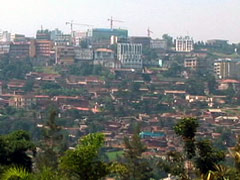 SEVERSON: The Rwanda transformation is not just among the victims and perpetrators. The country still has a long way to go, lots of unhealed wounds, but Rwanda now has one of the fastest growing economies in Africa and one of the reportedly least corrupt governments. Identity cards classifying the holder as Hutu or Tutsi are no longer allowed.

Bishop RUCYAHANA: We cannot wait until we forget the genocide to build a nation. It’s now, and nobody will build that nation for us. Our destiny is our calling.

Pastor RICHARDSON: The one thing that is obvious about John is that he truly believes that the truth sets you free.

SEVERSON: This man now guards the gates at Prison Fellowship, and he knows about being set free. He was a genocide killer and says before he repented for his crime, every minute of every hour of every day a horror movie played in his head.

Bishop RUCYAHANA: You need to see the pain they have. They can’t sleep. They hear the voices of the people they hacked to death. Voices are still fresh in their minds, and the stink of death and the smell of death are still upon them. They feel it, and they need to be relieved of that by means of repentance. 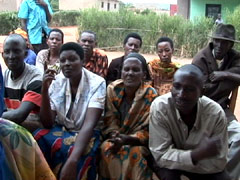 SEVERSON: Fredrick killed seven members of one family. After eight years in prison, he now has a family of his own. The man with the guinea pigs is Matais. He killed five of his neighbors, even after they gave him a cow as a token of friendship.

SEVERSON: Jacquelyn lost 11 members of her family, but she has forgiven, and she says that has relieved her pain. Now the victims and the perpetrators live in the same village, side by side, in peace. In fact, this whole village was paid for by Prison Fellowship and constructed by the killers and victims working together. There are several reconciliation villages in Rwanda and more being built.

Everyone here has stories, but the idea that they would be sitting together sharing them, victims and killers, would have been unthinkable 10 years ago.

Bishop RUCYAHANA: You need to be able to have both parties, give them time, cry with them, pray with them, engage them until you bring them to the level of confronting the reality that we are living in this county, we are going to produce together, and we are going to live together again. 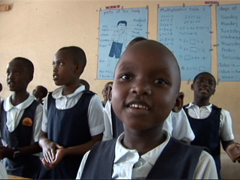 Pastor RICHARDSON: My 17-year-old observed as we left Rwanda, she said, “You know, Dad, some of those people probably didn’t repent.” And I said, “Yeah, you’re right.” I’m sure some of them were looking for a way out. But that doesn’t mean that many of them haven’t repented and that they don’t work hand-in-hand and side-by-side.”

Bishop RUCYAHANA: No, it doesn’t always work magically. We have to give it time. We have engaged a process. We have to hang onto the process until the work comes to completion. We may even die doing it. But we have to continue doing it anyway.

SEVERSON: There are nearly 400,000 genocide orphans in Rwanda, and they make up the majority of the 1,000 students at the Sonrise Boarding School, sponsored by the prolific fundraising of Bishop John.

Bishop RUCYAHANA: My school has become one of the best schools in the country, and we are training them. We are telling them they will be the leaders of Rwanda.

SEVERSON: This is a remarkable place, especially for kids who have never seen an indoor toilet or a computer. There’s plenty of food here, and beds, and classes on just about everything. They’re connected to the outside world with a satellite dish, and there’s even a working farm to teach them how to live off the land. The school is the focus of Bishop John’s fundraising these days as he makes his Sonrise School even bigger and better. The bishop knows all the school is doing to prepare Rwandans for the future won’t be enough unless they can also deal with their past.