Reverend BILL GAVENTA (Boggs Center on Developmental Disabilities): In every faith community there is a scriptural basis for welcome and hospitality. But you’ve also got congregations who live in cultures where people with disabilities have been hidden and ostracized and devalued in lots of ways, and too often faith communities sanctify prejudices in the community rather than challenge them. It shouldn’t be easier to get into a bar than a church.

SAFIYYAH A. MUHAMMAD: When I think back as a child, I don’t remember seeing anyone like Sufyaan at the mosque, no one. I don’t remember any children or adults like Sufyaan attending the mosque, and I don’t think that was by mistake. I think that we parents look at it as not just a distraction but an embarrassment. But he deserves to pray. He has a right to faith, too.

Well, the first time that Sufyaan attended the mosque not only was he talking out loud and using his hand motions, but he was running in and out of the rows. It wasn’t received well. There were whispers, there were talk: “He’s a bad kid. He obviously wasn’t raised right. That’s bad parenting.” 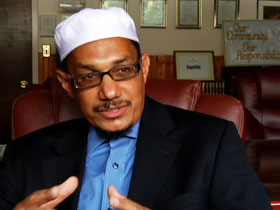 Imam W. DEEN SHAREEF (Masjid Waarith Ud Deen, Irvington, NJ): I think the primary challenge is a lack of knowledge, because sometimes families conceal the information that they have family members that have disabilities. Sister Safiyyah Muhammad made us aware of her son’s disability in terms of autism, and she’s made it almost like a quest for our community to become more knowledgeable about it.

SAFIYYAH: When the Koran refers to the believers it doesn’t say the believers except for the insane. Love for your brother what you want for yourself, and Sufyaan, autism or not, is considered a brother to another person who does not have autism.

Rev. GAVENTA: I’ve had families say to me, “I’ve fought all week to get my kid included in a school or whatever. I shouldn’t—I don’t want to have to fight when it comes to Sunday morning or Saturday.”

CYNTHIA MCCURDY (to her children): Are you guys ready to go?

In other families that I’ve talked to there’s been numerous instances of “We don’t know what to do with your kind” or “Please don’t come back.” 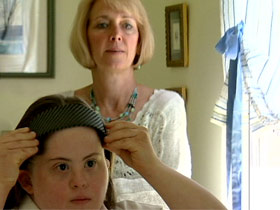 FEMALE VOICE AT CHURCH: Katie’s going to definitely do the sign language.

WOMAN: You look nice in your white top.

KATIE: Why thank you.

BOY: How you been?

Pastor MARK SINGH-HUETER (St. Paul’s Lutheran Church, Exton, PA, addressing congregation): We begin in the name of the Father, and of the Son, and of the Holy Spirit. Amen. Dear Lord, forgive the things I have done…

BILLY: I’m reaching up to the Lord because of my voice. I can sing unto his praise. 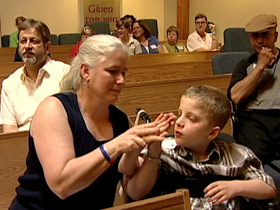 SUSAN: Frankly, I would not feel comfortable just walking into any church for a service because of the noisiness, and we usually make some kind of a scene—like we are right now, pulling hair—where here, you know, we really don’t have to worry about it. A lot of times when we’re out in public, Joshua does experience a lot of stares when we go into restaurants and things. So we find that we really don’t go to a lot of the public places. This is wonderful, because not only does he get time to come and be exposed to worship, but I get to come back to church, too.

CYNTHIA: When I see individuals of all abilities feeling free to be themselves and to worship as God has intended them to be, I feel the Holy Spirit moving within everyone.

Rev. GAVENTA: Faith communities have gone from doing nothing to doing special things for people, with this sort of special services for special people and special religious education, to then hearing families and others say don’t do anything special for us. Just include us.

Rabbi DAN GROSSMAN (Adath Israel Congregation, Lawrenceville, NJ): Several families moved to this community because we make it an inclusive community. I don’t want a synagogue that doesn’t let Jews in. Isaac was blind—in most synagogues he couldn’t find his way around. Moses stuttered—in most synagogues he couldn’t read from the Torah that’s called the Books of Moses. So you got to create the environment where everybody has a place, and if you start with that notion, then everything flows from there. 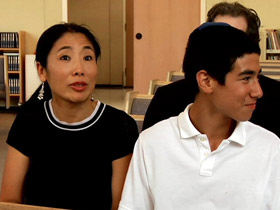 SAM’S MOTHER: We were at a different synagogue. Sam’s autism, you know, outbursts occasionally, was really not tolerated. So we came here. Immediately the whole synagogue accepted us. He learned Hebrew and loves to be on the bema.

Rabbi GROSSMAN (signing): So when I come back in the summer, in August, we can study together? Alright. You’re a good guy.

BOY AT SYNAGOGUE: Not many deaf people read the Torah. My dad always said to me I am better reading in Hebrew than English.

Rabbi GROSSMAN: We have a reputation that we are a special needs community, when in fact that probably only makes up a small percentage of the active community in the synagogue. I think it defines the synagogue because it simply doesn’t happen elsewhere.

WOMAN: I happen to be married to a gentleman who’s a quadriplegic and in a power wheel chair. There’s lots of ways of creating access to the bema. But what’s really special to him is that everyone uses the ramp. That’s the first time he’s felt—when he’s been in a synagogue, accessible or not—where he’s felt there’s true inclusion.

Rabbi GROSSMAN: There are seats that can accommodate wheelchairs in a row, so you’re not stuck in an aisle separate from everybody else. There are large print prayer books, Braille prayer books. Most synagogues have Torahs usually higher; you have to lean forward into it. By having them free-hanging like this anyone can roll up literally in a wheelchair, take the Torah, lift it, and come out with it.

FATHER: What would happen to these kids if a synagogue like this wasn’t around?

Rev. GAVENTA: If everybody is created in the image of God our community should be a reflection of the diversity and the wonder of God’s creation.

Rabbi GROSSMAN: I’ve had so many people over the years say it feels like they’re part of a real, living community as opposed to an artificial community where only perfect people are sitting here.

SAFIYYAH: Some people would say what is he getting out of it? Why is he here? He’s a distraction. We need prayer more than he does.

But the fact is who’s to determine who gets more blessings and who doesn’t?