NARAYANSWAMY SUBRAMANIAN: Navaratri is known as the Festival of Nine Nights, and this is dedicated to the Supreme Being in the form of the Divine Mother.

The Mother is worshiped in three different forms. Each of these forms have a certain characteristic. Goddess Durga helps us overcome obstacles. Goddess Lakshmi gives us both spiritual as well as material wealth. Goddess Saraswathi is the one that confers knowledge and wisdom and ultimately takes us to the path of liberation. 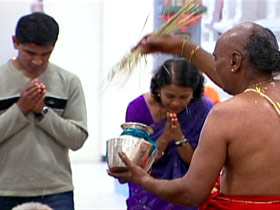 We have been having a special fire ceremony. This year, in view of the calamities that are facing the world, we seek the divine grace and blessings of the Divine Mother to mitigate financial turmoil, the H1N1 virus and other diseases that are spreading.

Priests offer a variety of fruits. We offer vegetables, grains. In India, women wear what’s called saris, so we offer saris to the Divine Mother. These are all offered with clarified butter, the purest form of offering.

The fire is a carrier of all the oblations that you give to divinity. Just like when you send a telegraph money order, the fire takes what you give and converts it to the kind of food or the material things that is desired by the deity.

Material offering, when combined with chanting portions of what’s called the 700 hymns on the Divine Mother, becomes a very powerful vibrational offering to the deity. We feel that the divine vibrations will reach throughout the world and will benefit all mankind.

Water is supposed to be a very powerful way of absorbing these vibrations. They carried these silver pots filled with water that had been energized with all the powerful chantings up to the temple. The sanctified water is poured on the deities. This is one way of recharging, resanctifying, increasing the positive vibration of the deities. The deities are already very charged, but from time to time, we need to recharge it so that the vibrations increase, and it becomes more and more powerful in terms of blessing the devotee who comes to worship.

We had anthropomorphic forms, where God is deified in a human form, and as we progress in our meditation, in our spiritual exercises, the form no longer becomes important. God is no longer confined to a certain temple, to a certain deity. God is everywhere, and once you start seeing God in everything, that’s when you have reached a certain level of perfection, and that’s when we say there’s no more worth for you, because you’re now merged with the God, and this is what Hinduism is all about.