BOB ABERNETHY, anchor: In 2002, we aired a profile of the young, bestselling poet Mattie Stepanek and his mother Jeni. They both suffered from a rare form of muscular dystrophy. The messages of hope and peace in Mattie’s writings inspired millions of people around the world. Mattie died in 2004, but Jeni is working to keep his memory alive. She talked with Kim Lawton about how her faith gives her the strength to move forward.

KIM LAWTON, correspondent: It’s standing room only at the Border’s Bookstore in Bethesda, Maryland, where Jeni Stepanek is talking about her new book called Messenger. The book is about her son Mattie, the New York Times bestselling inspirational poet who died five years ago at the age of 13. Mattie had a rare form of muscular dystrophy, the same disease that afflicts Jeni. This is the store where Mattie had launched his books, too, and the fact that he’s not here tonight highlights the loss that’s still raw.

JENI STEPANEK: Since he died, I’ve hit some very, very low points. I have had mornings where I’m not quite sure what the sane reason is to bother getting out of bed. I always find one, and if I can’t find one, what I’ve learned is to allow other people to give me a sane reason to get out of bed. 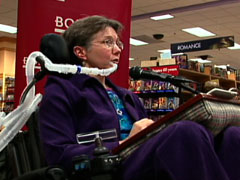 LAWTON: One of Jeni’s biggest reasons for getting out of bed every day is her quest to keep Mattie’s legacy alive. In his short life Mattie wrote six books of poetry and a collection of essays that he collaborated on with Jimmy Carter. He became a friend to the rich and famous and touched millions of people around the world with his message of hope and peace.

MATTIE STEPANEK: God gives me hope that there is something greater than us, something better and bigger than the here and now that can help us live.

LAWTON: Mattie told us in an interview seven years ago that he believed God had a plan for his life.

MATTIE STEPANEK: I feel that God has given me a very special opportunity that I should not let go to waste. I use the gift he has given me.

LAWTON: Jeni says from the time he was just a little boy, Mattie told her God was putting messages in his heart.

JENI STEPANEK: And I began to get concerned, actually, and ask him questions like, “Are you hearing voices? Is God’s voice a man’s voice or a woman’s voice?” And he looked at me like I had lost my mind, and he said, “Mommy, God’s voice is not like this. It’s a message in my heart.”

LAWTON: Mattie believed God wanted him to give voice to those messages, and he did that through his poems, which he called his “heartsongs.” Jeni says there were several basic themes.

LAWTON: Since Mattie died, Jeni has gotten thousands of letters and emails from people who say he continues to inspire them. There’s even a grassroots movement of people who want the Roman Catholic Church to open an official investigation into whether Mattie should be recognized as a saint. 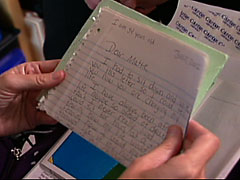 JENI STEPANEK: I have had people who have contacted me to say they believe Mattie has interceded in their lives. They believe that Mattie has healed their child, or touched their spirit, or turned them back to God, or prevented them from suicide.

LAWTON: As the mom of a kid who loved practical jokes and didn’t always make his bed, she finds it all humbling and, a bit overwhelming.

JENI STEPANEK: I feel the responsibility to share with people the truth of my son’s life. What I don’t want people doing is thinking, oh Mattie, you know, and putting him up on a pedestal: he’s a little guru, he was perfect, he never got angry, he never got sad, he only spoke bits of wisdom. I mean, he wasn’t. That’s not who Mattie was.

LAWTON: Jeni chairs a foundation named for Mattie that tries to make his message as accessible as possible. There are school curriculum projects based on Mattie’s writings, and parks like this one in Rockville, Maryland, that has a life-sized statue of Mattie and his beloved service dog, Micah, who is now Jeni’s. Jeni herself has also become an inspiration to many. Mattie was her fourth child to die of the disease that she didn’t even know she was carrying.

JENI STEPANEK: When I was having these children, I did not know I was going to give birth to children with this condition. When I was having children I was apparently healthy, active, running two to five miles a day, coaching and playing sports, working on my first doctoral degree.

LAWTON: She was diagnosed when Mattie was nearly two, after her oldest two children had already died and her third child was also dying from the disease. She and her husband divorced, so her focus became being a single mom.

JENI STEPANEK: So even though you grieve the loss of your child, when there’s still another living child, not that the grief isn’t there, but you have to focus on celebrating life with that child, with the one that’s still alive. When Mattie died, that’s when the grief became so overwhelming, because where do you put your mommy role?

LAWTON: Jeni says her Catholic faith helped her cope, and she says despite some times of questioning God, her faith has grown dramatically. 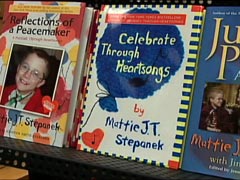 JENI STEPANEK: I’m very good at, through prayer, giving God a to-do list, all right? Dear God, this is where I need you, and this is how you can meet my needs, and I give God the little to-do list, and I think I began to realize towards the end of Mattie’s life prayer is not just giving God your wishes. It’s asking to bring God into whatever the moments are in my day.

LAWTON: She also has a close circle of friends, chief among them her roommate, Sandy Newcomb, and Sandy’s extended family, whom Mattie called their “kin family.” Jeni says they’ve made all the difference in her life.

SANDY NEWCOMB: I’d like to think in some way that my support of Jeni and Mattie has helped them to be able to do what God wants them to do.

LAWTON: Jeni’s own health continues to deteriorate. She says the most difficult thing is giving up independence and control.

JENI STEPANEK: It’s really hard knowing I will always be the passenger in a car. I will never be driving again. That’s a really, really tough thing when I’m a doer, a giver, a be-er, and you have to be the recipient and call someone and ask them to do something for you. That’s a tough lesson for me.

JENI STEPANEK: And what I would give to have my son come and stand and just say “hi” or “yo,” just say anything, just touch me. But I know that that would be wrong, and I think that my son is wiser than that, because if my son came and spoke to me or touched me, and I knew without doubt this is my son, I so miss him that I’m afraid I’d never emotionally or physically be able to move from that spot.

LAWTON: She says near the end of his life Mattie knew he was dying and tried to prepare her. But she couldn’t accept it.

JENI STEPANEK: It was one of my mommy decisions that I regret. You know, I should’ve just put my arm around him and said that must be really difficult. You must feel very alone. I just, I couldn’t tend to it, and I feel very badly. I will forever feel badly about that. But I don’t think he holds that against me. I think he knew that I was being a mommy.

LAWTON: Still, she says Mattie gave her the hope and faith to move forward.

JENI STEPANEK: He said when I’m gone promise me you will choose to inhale, not breathe merely to exist, and that means finding some worthy reason to move into each next moment, and that’s the most difficult choice I face every single day. But it’s the most worthy choice.

LAWTON: She says she’s learned that it’s not how long you live that matters, but the depth with which you live those days. I’m Kim Lawton in Rockville, Maryland.