BOB ABERNETHY, host: The news from Haiti remains grim. Officials are estimating the earthquake killed 200,000 people and left some two million homeless. The UN humanitarian chief said three million people have been affected. Foreign governments have pledged one billion dollars for recovery, but logistical problems on the ground are preventing much of the aid from reaching the most vulnerable. The US has sent in thousands of troops to try to help coordinate the relief effort. The UN is trying to take the lead in a country that now has a barely functioning government and where many religious institutions have been destroyed. But the UN, like other humanitarian and religious groups, is still recovering from its own losses. At a special memorial service for the dozens of UN workers killed by the earthquake, UN Secretary General Ban Ki-moon called it the “gravest single tragedy” in the organization’s history. People around the world have responded with an outpouring of donations. Americans have pledged hundreds of millions of dollars. At the Haitian Embassy in Washington this past weekend, workers were inundated with bags of clothes and supplies. One of the busiest centers of aid is in south Florida, which has one of the largest concentrations of Haitians in the country. Kim Lawton reports that church officials and volunteers are working tirelessly to provide food and medical supplies. They are also grappling with the often-asked question: Why did God let the earthquake happen? 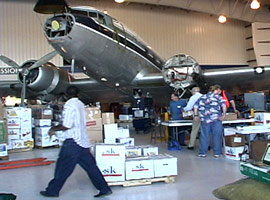 KIM LAWTON, correspondent: At a small airport in Fort Pierce, Florida, a Christian aviation ministry called Missionary Flights International (MFI) has been working around the clock trying to get desperately needed help into Haiti. Hundreds of volunteers from local churches are sorting and packing donations that have come in from across the US, from food and water to medical supplies, clothes, and even fuel, and MFI pilots are flying in the cargo and emergency personnel as fast as they can.

DICK SMOOK (Missionary Flights International): It’s a great feeling. You know, most people like to help each other, and we found that here. It’s just amazing the things that have come together here. People want to help do something, and you find out what they do and what they can do, and pretty soon you’ve got a job for them.

LAWTON: For more than 40 years, Missionary Flights International has been providing air support to missionaries and church personnel in Haiti and other Caribbean nations. They regularly fly in mail and supplies and help transport personnel.  Since the earthquake, they’ve been in all-out crisis mode.

SMOOK: Because we are well known by all the mission communities and all the churches that support these missionaries down in Haiti, they know that this is the place to call and to locate, so it’s not like somebody has to figure out who to call and what to do. They already know.

LAWTON: And MFI has been well-positioned to respond. Because of the type of planes they fly, they are landing on a smaller air ramp in Port-au-Prince, avoiding the massive back-up of military and other humanitarian planes on the airport’s main runway, and they say their longstanding local connections make them especially efficient in delivering the aid. 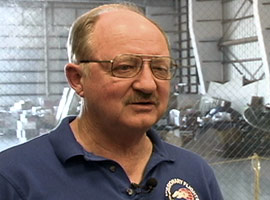 SMOOK: We also have a network of missions in Haiti that is distributing it for us, so our stuff gets out twhere it needs to go. It’s not being held. It’s out within a few hours after we get it down there.

LAWTON: For days now, people wanting to help Haiti have been lining up outside MFI’s hangar, hoping to get a spot for themselves and their relief aid. Haitian-born Israel Francois and a team from his Hollywood, Florida, church were among them.

REV. ISRAEL FRANCOIS (Sheridan Hills Baptist Church): Definitely, it makes a big difference, personal touch, just letting people know that we care. It’s one thing to say, but it’s one thing to go there and say we’re in this with you. It’s a calling for me. God called me to do this, and I’m going to do it.

LAWTON: On their return trips, MFI pilots have been bringing people out of Haiti, including injured earthquake victims and evacuated missionaries and, on some occasions, Haitian orphans. For three years, Brian and Karen Patterson from Omaha have been in the process of adopting two little girls from Haiti. After the earthquake, they were terrified about the girls’ fate.

BRIAN PATTERSON: The phones were down for the first day, and so it took quite a while before we even found out whether they were okay, so that was good news.

LAWTON: Then, with less than a day’s notice, they learned that the adoptions had been expedited. Three-year-old Carlina arrived in Florida Tuesday (January 19), with her sister soon to follow. Missionary Barbara Walker brought Carlina and several other children from their orphanages in Haiti, but she says the situation she was returning to is increasingly dire, with resources disappearing quickly.

LAWTON: She says fear is taking an emotional toll.

WALKER: We’ve got so many babies right now that are scared. These children are scared every time they hear a loud noise, and including myself, if I’m laying down at night and I hear a loud noise I jump up and run out of the house. You know, I’m sleeping in a house that is unsafe, but I have to get some sleep, so…

LAWTON: Fifteen miles outside of Port-au-Prince, Haiti Gospel Mission is also scrambling for resources. Despite some property damage, their small medical clinic is still treating injured people, including many who made their way there from the city. They are also trying to help displaced people who are taking refuge in the mission compound. From here in the US, Jesse Hales with the mission has been able to get them some food and medical supplies, but not enough to meet all the needs. Hales has set up shop in an RV near Fort Pierce so that he can help coordinate more shipments, as well as teams of volunteers who want to go in. He says there are rising concerns about security, and the chaotic situation makes planning very difficult. 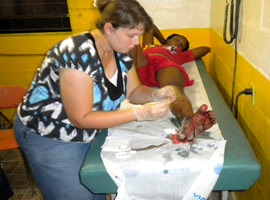 JESSE HALES: You can’t depend on anything right now. It keeps changing by the minute. You know, every minute I get a phone call, and we find out something new and it kind of throws another wrench into play.

LAWTON: And so many still haven’t gotten any help, especially in the hardest hit areas outside of Port-au-Prince. Sharen Deroseney has been desperately trying to get aid to her father and to some 200 people, including 50 children, at his church-run compound.

SHAREN DEROSENEY (The Good Samaritan Project): What’s happening now is that we are running out of food. The stores don’t have any, and they’re tripling their prices. I myself kept calling different places, different companies for help, and nobody has covered that area. To know that they’re okay I’m very glad, but to know that they may die of hunger, that’s not good.

LAWTON: Meanwhile, pastors are also struggling to meet spiritual needs in the wake of the earthquake. This group of Protestant pastors in Fort Lauderdale wrestled over how to help their predominantly Haitian congregations deal with the crisis.

REV. CLAUDE NOEL (Partners with Haiti): There is nobody that I talk to or that have called me who have not lost close relatives in Haiti, and so it hurts. It hurts a lot.

REV. NOEL: He left to go to town just to buy some books two hours before the situation happened, and he never came back, and we have not found the body.

LAWTON: Churches are setting up counseling services to help people cope with the loss of loved ones and the loss of so much of their homeland. 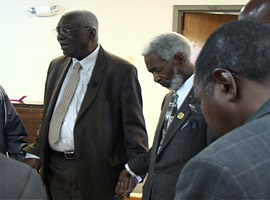 PASTOR CALEB DELIARD (Victory of Grace Christian and Missionary Alliance Church): Everything is gone. Remember this is things that people worked hard for, years, for 200 years, and you look in one minute, just 35 seconds, it’s all gone. So deep down, you could call, it hurts us deep down. We are, as a people now, wounded souls.

LAWTON: Many pastors say their congregations are asking theological questions that don’t have easy answers.

REV. NOEL: They are struggling with this question: There is nothing that’s done without God’s permission. Why did God allow this to happen?

LAWTON: Churches beyond the Haitian-American community are grieving as well.

REV. JOHN LAWRENCE (Interim Rector, St. Patrick’s Episcopal Church, Washington, DC, preaching): We realize our radical dependence on the God who alone can overcome the depths of our despair…

LAWTON: St. Patrick’s Episcopal Church in Washington, DC has had a relationship with Haiti for nearly 30 years. St. Pat’s parishioners have gone on short-term mission programs there for decades. They supported a church and a school with a music and arts program. Those were destroyed, and they still don’t know what has happened to many of their friends in the area.

MARCY FERENCE (Haiti Partnership Program Coordinator, St. Patrick’s Episcopal Church, Washington, DC): I feel very much part of that community as a part of a family, and we don’t have any word, and it’s very hard. It’s very hard.

LAWTON: Despite the overwhelming tragedy, many churches are urging their members to focus on hope.

LAWTON: Dick Smook of MFI says he’s already seen glimpses of that hope in the massive response to the crisis.

SMOOK: The church sometimes is thought of as the walls and the steeple and the people, that’s good, in our comfortable pews with the air conditioning going. But in reality what we’ve seen here in the last week is the church, Christians on the front line. That’s where we should be.

ABERNETHY: Kim, welcome back. What impressed you the most about what those volunteers are doing? 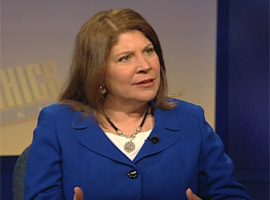 LAWTON: Well, I was impressed by the magnitude of the operations, you know, people, retired people, people from all over the country had gone there to try to be personally involved, and they were working day and night. They were working so hard. They’re so concerned about the situation there and trying to do whatever they can, whether it’s looking at expiration dates on food that had been donated or sorting and packing things. So it was that kind of grassroots effort that was really interesting to see. Also just the emotional exhaustion with the Haitian-American people, the pastors and churches here trying to provide comfort for their people while they themselves were grieving from everything that they lost themselves and everything that’s still happening in Haiti. People are worried, they’re exhausted, and that really came through in all those efforts.

ABERNETHY: That aid is not nearly as massive as what the governments are doing, but it sounds, from your piece, it sounds as if it was very effective, very efficient.

ABERNETHY: But do they want to go there?

LAWTON: So many people I talk with are so frustrated to be stuck in south Florida. They’re desperate to get down there to help, to see their families, to do what they can, and right now logistics are just so difficult that they can’t do it, but they’re still down there in Florida doing what they can from there.