KIM LAWTON, guest anchor: The president was on the road again this week trying to sell health care reform.  Meanwhile in Washington, behind-the-scenes negotiations continued over several potential stumbling blocks, including funding for abortion coverage. Another controversial question in the effort to create affordable health care is how treatment at the end of life might become more humane and less expensive.  Right now, in most states, when a dying patient can no longer communicate, doctors have no choice but to keep care going, even if it is painful for the patient, expensive, and unlikely to do any good. But is that necessarily the right thing to do?  Betty Rollin has our report.

FAMILY MEMBER: She’s been fighting cancer for five years, twice. She has emphysema of the lungs real bad. It’s gotten worse, they said, since she’s been in here, and right now she is fighting a bad stroke. They are not sure, but they are saying something like it could affect her left side and maybe her brain.

BETTY ROLLIN, correspondent: Did she leave any instructions about what to do?

FAMILY MEMBER: No, she did not.

ROLLIN: And that’s a major problem, says Dr. Jeff Gordon, an internist at Grant Medical Center in Columbus, Ohio. Dr. Gordon has had dying patients who have not made their wishes known and haven’t realized that some extreme measures are almost always futile. 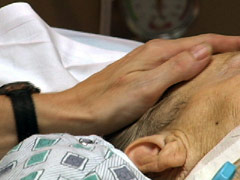 DR. JEFF GORDON (Grant Medical Center): Most people think, that is for elderly people especially, that heroic measures like CPR and ventilator support is really effective, and the truth is, in older people with complicated medical problems, it just doesn’t work effectively, so the bottom line is people suffer needlessly at the end of life.

Ventilator–there is a plastic tube that goes through the mouth into the windpipe, and just imagine the gagging kind of feeling. Now we give high levels of sedation to inhibit that, but that alone, now think of yourself, these people typically have to be restrained so that they don’t just reflexively reach up and pull that tube out, and so they have their arms restrained. They can’t move freely, and think of yourself being on your back restrained, just the muscle aches and pains that you would develop.

ROLLIN: Dr. Gordon points out that sometimes aggressive treatment is a good idea.

DR. GORDON: Intensive care and heroic measures are awesome when they are used in the right people. The right people typically are younger people that have a chance of survival and having a good outcome.

ROLLIN: Dr. Philip Hawley, who is director of the intensive care unit, says the state mandate is to keep life going no matter the cost, so although doctors think their patients should be allowed to die peacefully, their hands are tied by custom and law.

DR. PHILIP HAWLEY (Grant Medical Center). We have people who are terminal on aggressive life support measures. Clearly they are not going to survive. We are spending all this time and money taking care of them. They are suffering, and it’s completely inappropriate. 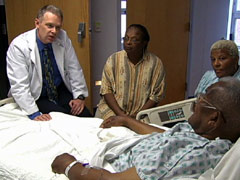 DR. GORDON: What people need to do is talk about this with their family, with their physician, in advance. If they get a life-threatening illness, a lot of times they won’t be able to. Maybe they won’t be coherent, or they’ll be on a life-support machine. They can’t express their wishes, then they put their family in a bind, so they feel guilty, they don’t know for sure, and then what often happens is the sort of default is, well, let’s do everything, as much as possible.

ROLLIN: And sometimes families disagree about what to do. It’s hard for some to let go, which complicates things further.

DR. HAWLEY: If we could get families to deal with this we would not have this problem. We feel we as physicians should be able to step in and say we’ve got to stop the madness.

DR. GORDON (speaking at church service): Lord, help us have perspective. That’s what changes lives. That’s what gives us hope.

ROLLIN: Dr. Gordon, who is also a nondenominational pastor, was surprised to find that patients who are religious often want more aggressive treatment at the end of life than others.

DR. GORDON: I have even encountered people that are people of faith, and they are, what I think, pursuing futile-type measures, and they say well, we are going to let God have his way here, and I try as gently as possible to say we are not really letting God have his way. We are forcing the issue here. 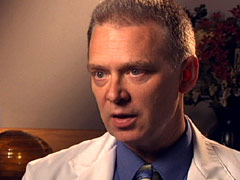 (speaking to patient): Has anyone talked to you about this?

DR. GORDON: No, no. It’s a topic that doesn’t get talked about.

ROLLIN: Dr. Gordon practices what he preaches by getting patients, as well as their families, to talk about what they want at the end of life while they still can, and he tries to make both patients and families aware of realistic rates of recovery.

DR. GORDON (speaking to patient): I just want you to understand is that those kind of things like CPR and breathing machines in somebody that’s got the problems that you have are not very effective. You need to decide whether that is something you would want or not, but you need to have all the facts about it, too.

ROLLIN: One of the reasons conversations like this rarely happen between patients and physicians, says Dr. Gordon, is that physicians are paid to treat, not to talk, which is not to say that some don’t talk anyway.

ROLLIN: There are three things people can do to make their end-of-life wishes clear: Sign a durable power-of-attorney naming a person to make decisions if they are unable; sign a living will which is about long-term life-sustaining treatments; and deal with the DNR question—whether if your heart stops you want to be resuscitated or not. 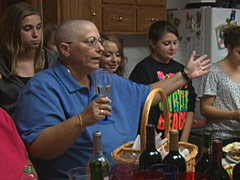 Jill Steuer, who has metastatic breast cancer and has been given four months to live, has decided to stop any kind of treatment and receive hospice care.

ROLLIN: Jill Steuer is a nurse and researcher at Grant Hospital.

JILL STEUER: I’ve seen patients who have died horrible deaths, where their families wanted everything, the doctors wanted everything, but it was not to be, and that scared me. I’m not sure they realize that it’s okay to say “I’ve had enough.” Even now people will stop me in the hallway and they’ll say keep up the good fight, keep up the good fight, and I think some people are afraid that they are going to disappoint others if they just say let’s have nature take its course. I’m putting up a good fight, but my goal is not to live a long and painful year or two. I would much rather say at this point in time I want the next four months to be as interesting as the last 57 years have been.

LAWTON: Shortly after we produced that story, Jill Steuer passed away.