BOB ABERNETHY, anchor: Easter or Pascha is this weekend (April 4) for both Western and Eastern Orthodox Christians. Because of differing church calendars, the two branches of Christianity often celebrate Easter on different dates. But as Kim Lawton reports, their celebrations reflect shared beliefs about the Christian faith.

KIM LAWTON, correspondent: During Holy Week, churches around the world echo the familiar refrain that proclaims a central tenet of Christianity: Jesus Christ was crucified, died, and was buried, but three days later he rose from the dead. Eastern Orthodox and Western Christians alike say celebration of the Resurrection is the most important event on the church calendar. 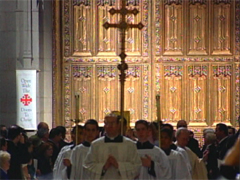 MS. FREDERICA MATHEWES-GREEN (Holy Cross Antiochian Orthodox Church): This is the victory of Jesus Christ over sin, over death. It's what sets us free. In comparison, Christmas is not that important. We like Christmas. Everybody does. But the whole point of our salvation is embodied on Pascha.

WALT WANGERIN JR (Author, "Paul: A Novel"): This is the very center of what we believe, of who we are, of what our identity is, of why we continue to return to the Lord in joy. Without Easter, there is no church.

LAWTON: More often than not, Eastern Orthodox and Western Christians celebrate the Resurrection on different days. But a growing number of American church leaders say this should change.

FATHER RON ROBERSON (National Conference of Catholic Bishops): The credibility of the Christian message really gets compromised when people on the outside see that we can't even agree on when to celebrate the central mystery of our faith.

LAWTON: Conflicts over the celebration of the Resurrection stretch back to the beginning days of Christianity. Early church leaders wanted all Christians to celebrate the Resurrection on the same day, after the Jewish Passover. To that end, a council of bishops in the fourth century decreed that Easter would fall on the first Sunday after the first full moon, after the spring equinox. But as the Roman Empire divided between the Greek-speaking East and the Latin-speaking West, the church world also split. When Westerners adopted the new Gregorian calendar in the 16th century, the East kept the Julian calendar. Since the two calendars have differing dates for the equinox and full moon, in most years Easter falls on different Sundays. 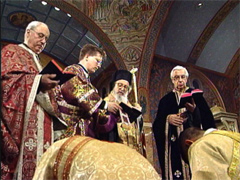 LAWTON: During Holy Week, churches mark their beliefs with special services. In the Eastern Orthodox tradition, these services are especially numerous and lengthy. One unique observance is the service of holy unction on Wednesday night.

MS. MATHEWES-GREEN: At the conclusion of this service, the members of the church line up and come forward for anointing, for healing. In the Orthodox Church, we still have a lively belief that Jesus heal, that we need healing of our souls and our bodies.

LAWTON: On Holy or Good Friday, Christians remember the Crucifixion. According to many theologians, of all the traditions Roman Catholics tend to give special emphasis on the suffering and death of Jesus. Through the Stations of the Cross, or in dramatic productions, Catholics often reenact the journey to the Crucifixion.

Some Protestants gather Friday evening in a solemn worship service that remembers the Crucifixion through the taking of Communion.

Catholics and many Protestants traditionally strip their altars bare. Statues and crosses are covered in purple or black cloths, the shrouds of death.

In Eastern Orthodox churches, a shroud showing Christ's body is actually carried in a funeral procession around the church and then laid in a tomb adorned with flowers.

MR. WANGERIN: What should be experienced on that day by these very specific traditions is the sense that the Lord died. There is, and there ought to be, a sense of mourning at this point, the mourning that the disciples felt when Jesus gave up the ghost and breathed his last. 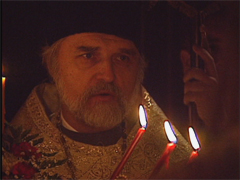 LAWTON: Eastern Orthodox and growing numbers of Catholics and Protestants begin celebrating the triumph of the Resurrection Saturday night, before midnight.

FATHER ROBERSON: It is the celebration of darkness and light. The church starts in the darkness, and there is that light of a single candle, which then is spread out all through the congregation. It is a real celebration of the hope and the meaning that the Resurrection of Christ brings to our lives.

LAWTON: In many Orthodox traditions, the service spills out into the street, processing outside the church.

MS. MATHEWES-GREEN: We sing over and over "Christ is risen from the dead, trampling death by death, and upon those in the tomb, bestowing life." We'll say it over and over, shouting it out, rejoicing at what Christ has freed us from, and what he's freed us to.

LAWTON: Some Protestants also gather in darkness, in a pre-dawn Easter sunrise service. Others gather later Sunday morning, with joyous pageantry and celebration.

MR. WANGERIN: Easter should be for us a genuine joy, not just in our minds, but also in our physical experience -- that for awhile, death was all that existed, but coming with Easter is the remarkable, surprising grace that death is overcome. Christians say to one another, "He is risen," and the answer is, "He is risen indeed."

LAWTON: And despite differing traditions and rituals and even days of celebration, church leaders say that is the ultimate -- and unifying -- Easter message.

FATHER ROBERSON: We celebrate a single reality of Jesus coming into the world, the son of God becoming incarnate and entering into our lives. And we celebrate the central reality of his death for our sins -- that he suffered and died for us, and on the third day, he rose from the dead.