KIM LAWTON, correspondent: Nestled among all the family photos at my grandparents’ home are other memories as well—art and gifts that symbolize their decades of work as missionaries in Haiti.

(speaking to her grandparents): I made a scrapbook for you of my trip.

Wesley and June Churchill are in their 90s now, but still feel as connected to Haiti as they were more than 30 years ago, when they first went there. My grandfather was a high school science teacher. As a United Methodist, he believed he was called to help others, so during breaks from school he did various service projects. In the 1970s, he connected with a group of men who were drilling wells for clean water in Haiti. After Grandpa retired from teaching, he and Grandma decided to work more long-term there. They joined with a small group of other Christians to establish the nondenominational Haiti Gospel Mission in Despinos, a village about 45 minutes outside Port-au-Prince. They began a variety of projects, including a church, a school, and a medical clinic. My grandparents worked in Haiti until 1997, when Grandpa turned 80. A young missionary couple, April and Joel Hess, now lead the work in Despinos. When I was a teenager, my grandparents brought me there to visit. It was clear I wasn’t cut out for missionary life. 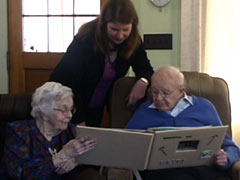 JUNE CHURCHILL: I can remember you going into your bedroom and a squeal came, “Grandpa, there’s a dead mouse in my shoe.”

LAWTON: They were my great shoes, my new shoes. I remember that very vividly. Other things I don’t remember, I remember the dead mouse in my shoe.

LAWTON: I returned to Haiti last month not as a missionary, but a reporter covering the aftermath of the earthquake, and I went to Despinos to see what was happening at the mission today. I brought back some video to show my grandparents.

JUNE CHURCHILL: Is that Renol?

LAWTON: At the compound, Renol, who worked with my grandparents in the 1970s, still takes care of the grounds and helps keep things going.

JUNE CHURCHILL: Renol used to ride into Port-au-Prince with Grandpa. He’d always say to me, “Mama, I guarde Papa, I guarde Papa,” and he did. He’d have a big club with him. 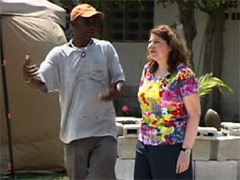 LAWTON: Renol showed me the changes to the mission house. The house sustained only slight damage during the earthquake, including some cracks on the roof, and a small part of the compound walls came down. Renol told me all about my grandpa’s influence on the mission, in big ways and small.

RENOL: Yeah, long time he wanted to keep it.

LAWTON: He wanted to keep the tree.

Just up the road from the house is the Haiti Gospel Mission Church. Pastor Elison Bien-Aime showed me the moderate damage there, most at the front of the building. The church has now raised enough money not only to repair the damage, but to add some columns to strengthen the building and an archway to make a more attractive entrance. Pastor Elison praised the construction work of my grandpa and another missionary, Melvin Barger.

LAWTON: I will tell my grandfather you said he did a good job.

BIEN-AIME: Exactly. He is a good engineer.

LAWTON: Because the church stands.

LAWTON: Elison grew up around the mission and was active in the church even as a boy.

JUNE CHURCHILL: He was always polite and a really nice boy. For a boy from out there to go to school and go to seminary he’s done well.

LAWTON: Elison told me he believed the earthquake has actually strengthened people’s faith in God. He said the church has been full every Sunday since. It was certainly full on this Sunday, when he called me up front to bring greetings from my family.

LAWTON (speaking at church): My grandfather is 94 years old. After the earthquake he said, “I want to go back to help them.” I think he will help you with his prayers. 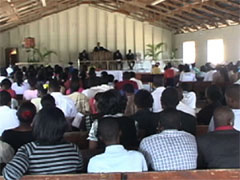 Elison told me my grandparents had a big influence on him.

BIEN-AIME: These are two monuments.

At the Haiti Gospel Mission satellite church in Leogane, Pastor Gilles Pierre was also moved at seeing a current photo of my grandparents.

JUNE CHURCHILL: Ever since we established the church in Leogane, he was with us.

LAWTON: He’s been there a long time.

CHURCHILL: He’s the only pastor that’s been at that church.

LAWTON: The church here didn’t fare very well. The building, as well as the parsonage and the school, were severely damaged. Pastor Gilles barely escaped.

LAWTON: It just came down on your head.

LAWTON: Leogane was near the epicenter of the quake, and about 80 percent of the town was destroyed. Pastor Gilles took me through a cornfield to show me the destruction at his wife’s family’s home. Most of his congregation members have lost everything. He hopes to rebuild, but for now he worries about surviving day-to-day. The church has moved the worship services to a large tent donated by US churches. It’s difficult for my grandparents to hear such stories about their friends.

JUNE CHURCHILL: It is so sad, because the poor people had nothing to begin with hardly, and now they… 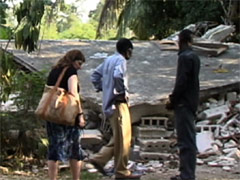 LAWTON: But there were happy stories, too. After my appearance at church, old friends came to say hello. Some remembered when I had come before; others wanted to meet the Churchills’ granddaughter, or as they called me, “petite-petite fille Churchill.” As word of my visit spread, one old friend drove in from Port-au-Prince to see me.

LAWTON: Yeah, from a long time ago.

JUNE CHURCHILL: That is. That is Bouchard. We’ve known him since he was a little boy. Yeah, that’s Bouchard. He sounds so natural.

LAWTON: The clinic my grandparents helped build is now thriving. There are two nurses on staff and a doctor who comes in every day, Monday through Friday. They see up to 20 patients a day. There’s a large, well-supplied pharmacy, and the supervisor of the clinic, who also grew up at the mission, tells me that in the back room they still plan on fulfilling my grandpa’s dream of setting up a laboratory.

JUNE CHURCHILL: That was Grandpa’s goal, to get that finished. 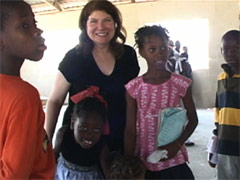 LAWTON: Immediately after the earthquake, injured people flooded to the clinic from miles away seeking medical treatment, and many patients are still getting follow-up treatment.

JUNE CHURCHILL: I’m sure the clinic was supposed to be there for this purpose.

LAWTON: When I was there Haitian schools had not yet reopened, so patients whose homes had been destroyed were living in the school. One was this woman, whose hand had to be amputated. Another was this girl, whose leg was injured.

LAWTON: Before the quake, the school had 255 students ages 3 to 15. The principal is Dalce Jean Augmanois. He told me, “The Churchills did a good work, because without them, we would have no clinic or school or church. Because of them, the children will grow up here and be able to work.”

Jeemps Pierre is a Bible school student who lives at the mission and helps out. He never knew my grandparents but says he’s impressed by the Americans who continue to come there to work.

LAWTON: Many of the things my grandfather tried to introduce never fully caught on, like bee-keeping and breeding stronger bulls and cooking with solar energy. Still, my grandparents told me they are gratified to see that work at the church, the clinic, and the school continues even despite a devastating earthquake. A testament, grandma says, to the resilience of the Haitian people. It’s also a testament to the work my grandparents did, the lives they touched, and the legacy they left behind.