BOB ABERNETHY, host: From time to time on this program we have referred to spiritual direction and spiritual directors. Recently, the Shalem Institute for Spiritual Formation in Washington gave us permission to record a full spiritual direction session with two of its most experienced directors, one seeking the help of the other. That is not unusual, they say—like one doctor treating another.

Spiritual directors say what they do is more like prayer than therapy, not so much counseling as helping people sense God’s presence. Every spiritual direction session is probably different, but this is what happened in the conversation we covered.

In Northern Virginia about a mile from the Pentagon, Bill Dietrich, a Quaker, came to the home of Jean Sweeney, a Catholic, who had a concern. I asked Bill to define spiritual direction. He likened it to being a midwife.

BILL DIETRICH: One who accompanies and is present to another as they discern how God is moving in their lives. We often say that spiritual direction really is prayer—nothing more, nothing less.

ABERNETHY: Bill’s opening prayer with Jean was about surrendering to God.

ABERNETHY: Jean is the youngest of five sisters. The oldest, Rocky, now 80, is in a nursing home suffering from dementia. Jean had just been to visit her.

SWEENEY: There we would be standing in front of the elevator and she could not decide to press the button, and when we got in the elevator, we’re on the second floor, she could not figure out that she would hit the button for first floor. Sometimes she would do it with two hands. And she looks twenty years older all of a sudden, you know, so I am watching this enormous loss.

ABERNETHY: The loss of Rocky’s powers and companionship, and also Jean’s sense of the loss that might be ahead for her.

SWEENEY: I mean we don’t know what’s in front of us, but I’d like to believe I could just give it over somehow. But do I want to live that way? No way.

DIETRICH: Do you see God working in Rocky’s life now?

SWEENEY: It’s a good question. (Can you reach these Kleenexes over there?) You know, I really see what abandonment looks like, in a way. Life goes on without us, and that’s what I see for Rocky in some ways. Her kids are—they have lives and children and it goes on, you know, and I thought, you know, Jesus felt abandoned, you know? I mean I think it’s—would you say that?

SWEENEY: To feel abandoned. You stop working and you go on and life goes on.

DIETRICH: It does, it does.

SWEENEY: I guess my own desire for myself, and actually even for Rocky, I wish she were just having a little more fun in the midst of it, you know. I think that’s what I want, and if I surrender to that moment, this is what is, could I have a good time, too, you know? To have fun with people in the midst of hard times? Yes, I want people to not be afraid to come near the abandoned one.

SWEENEY: Give me only your love and your grace. That’s enough for me. 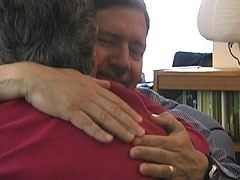 DIETRICH: What if we can’t feel the love?

SWEENEY: Well, I hate that, for God’s sakes. I know from the scriptures and from people that that actually does happen. No, I don’t want that. There are plenty of people that do not feel the love, and they have loved. They have been people of love.

DIETRICH: And you’re being that person of love for Rocky.

SWEENEY: Yeah. It did feel like precious in-the-moment time.

SWEENEY: Amen. Dear Bill, thank you. Who knew? Who knew?

ABERNETHY: Bill said afterwards that he had sensed God’s presence with them. Jean said she had been helped. We had worried that cameras and lights might be distractions, but both Bill and Jean said what happened felt to them fully authentic. Jean also said everyone has a story to tell about their spiritual life. All they need, she said, is for someone to ask about it.