CARLETTA TILOUSI: We felt very strongly that blood samples are sacred to all Native Americans, a major part of our spiritual, cultural, and religious identity. We are going to take them back down to Supai Canyon where they can finally rest in peace.

SEVERSON: Supai Village is actually at the bottom of the Grand Canyon, where about 600 Havasupai continue to weave baskets and farm and struggle against the diabetes that has afflicted so many of their tribe.

REX TILOUSI: I began to see the sickness come to my elders. Some of my elders didn’t have no legs. They were helpless. 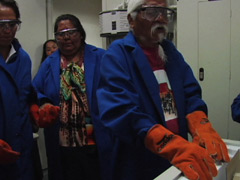 SEVERSON: So the Havasupai tribe approached a scientist at ASU who took blood samples of about 200 tribal members.

DANNY WESCOGAME: Thirty-two people have passed on since this whole thing began, and it hurts, hurts a lot to me.

SEVERSON: Scientists at ASU could not find the link to congenital diabetes, but author Rebecca Skloot says they didn’t stop there.

REBECCA SKLOOT: Those samples were later used without the tribe’s knowledge for research into schizophrenia, alcoholism, the effects of intermarriage, and a lot of the stuff was stuff that they either found to be stigmatizing or that actually went against some of their own belief systems.

SEVERSON: The Havasupai received a cash settlement in a rare win for cell donors. There are hundreds of millions of bio samples, such as blood and tissue stored in bio banks in this country. But the answers to the tough religion and ethics questions about informed consent and compensation haven’t kept up with the science. Bioethicist Jonathan Moreno says even the science-fiction writers underestimated the state of the art as it is today.

SEVERSON: And nowhere is there a better example of the importance of human cells than those cancer cells taken by doctors in 1951 from Henrietta Lacks as she lay dying of cervical cancer.

MORENO: They are the most prolific cells. Nobody knows exactly why. They have some characteristics that haven’t been identified, but they don’t seem to age in every passage. So far as we know those cells really are immortal.

SKLOOT: Henrietta’s cells grew sort of unlike anything anyone had seen. They doubled their numbers every 24 hours.

SEVERSON: Rebecca Skloot wrote the best-selling book called “The Immortal Life of Henrietta Lacks.” She says Henrietta’s cells, also known as Hela cells, put end to end would wrap around the earth three times and weigh more than 50 million metric tons. But what’s most amazing is their contribution to medical science.

SKLOOT: They have literally saved millions of lives, and pretty much everybody out there has benefited in some way from research on her cells. They were used to develop the polio vaccine. They went up in the first space missions to see what would happen to human cells in zero gravity. Her cells were the first ever cloned.

SEVERSON: Henrietta’s cells also made many scientists and entrepreneurs rich.

SKLOOT: Her family to this day lives in quite a bit of poverty. They can’t afford health insurance so, you know, the scientists would come to get samples from the family and, you know, her sons would say things like, “If our mother was so important to medicine, why can’t we go to the doctor?”

MAGGIE LITTLE (Kennedy Institute of Ethics): In general, when courts have looked at somebody who gave a tissue sample, and the pharmaceutical company later did find a commercial application for it, the courts ruled that the individual who gave the sample didn’t have any intellectual property rights or any claim to profit-sharing.

SEVERSON: Rebecca Skloot spent 10 years researching and writing her book and eventually won the trust of Henrietta’s daughter, Deborah, who didn’t find out about her mom’s amazing cells until researchers asked the family for samples 25 years after Henrietta died.

SKLOOT: Deborah was a very deeply religious woman, and she very much believed her mother’s soul was alive in these cells, and so the scientists would come to the house and take samples, and she would say things like, you know, “Can my mother rest in peace if you’re sending these bits of her up to the moon and injecting them with chemicals? Can she feel that somewhere? Does she then get sick in the afterlife?”

SEVERSON: She became so distraught worrying about her mother Deborah’s cousin, Gary, offered to perform a kind of exorcism.

SKLOOT: He just stood up and put his hands on her head and started singing and praying and, you know, saying, “Lord, you’ve got to take the burden of the cells from this woman. She can’t take it anymore. It was an enormous relief for her.

SEVERSON: Today there are laws requiring consent from people like Henrietta Lacks, but they apply only to research that is federally funded, and there aren’t clear laws regarding stored tissues. But Maggie Little says if someone’s cells are used for specific research end up being profitable, then the donor should be compensated.

LITTLE: Sometimes individuals have biologies that are especially interesting, and their version of a cancer cell or their version of a liver cell is of enormous commercial value, and then it does seem to me that fairness indicates a little bit of profit-sharing.

SEVERSON: And ethicists like Jonathan Moreno feel that privacy and confidentiality are absolutely essential to protect those who do give.

MORENO: If you take some of my tissues, my cells, and do genetic analysis, you’re learning not just about me, but in some measure at least you’re learning about my relatives. So we have to be very sensitive to the prospects of stigmatization.

SEVERSON: As for informed consent and defining exactly what the researcher is looking for: 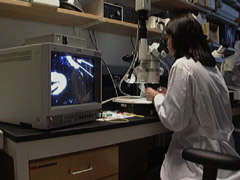 MORENO: What drives a scientist is the unexpected, and that’s what you can’t capture in informed consent. Probably the better model is the idea that really if my cells are being taken as part of my therapy, and they might be useful in science, I should really gift them. They should—I should give them away to the scientific community so that they can be used productively.

SEVERSON: Deborah might have argued that the family should have received some remuneration for Henrietta’s fertile cells, but she finally came to terms with her mom’s legacy.

SKLOOT: She really came to believe that Henrietta was chosen as an angel to live on in these cells and take care of people and, you know, if you look at the Bible it says the Lord—believers will be granted immortal life, and you never know what form they’ll come back in.

SEVERSON: As for the Havasupai, they’ve taken their sacred blood samples back down to the canyon, where the tribe says they can rest in peace.

For Religion & Ethics NewsWeekly this is Lucky Severson in Phoenix, Arizona.