BOB ABERNETHY, Host: This week marked the six month anniversary of the devastating earthquake in Haiti which killed more than 230,000 people. Humanitarian groups say while there’s been some recovery, an overwhelming amount of work still needs to be done. An estimated 1.5 million Haitians continue to be homeless, many enduring the rainy season in flimsy tarps and tents.

Our managing editor Kim Lawton has been covering faith-based efforts in Haiti. She’s been there twice since the earthquake. Kim, welcome. What do you hear? 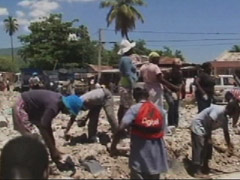 KIM LAWTON, Managing Editor: Well, obviously there’s a lot of frustration among the humanitarian community. The people that have been down there for six months now working. They’re frustrated by so many problems that have kept them from doing all the good they’d like to do. I mean, there’s just so many obstacles. You’ve got still a ton of rubble that’s around, nowhere to put it. Bureaucracy, the infrastructure of the country was so devastated, so that the bureaucracy in place is cumbersome.

ABERNETHY: They can’t…they say they can’t get the supplies through customs.

LAWTON: Right, right, building things, getting things through customs, figuring out which office needs to approve what, and who needs to—you know, what fees need to be paid, so that’s really frustrating for them. And, you know, there are land issues. A lot of these tarps and tents have been set up on land that belongs to somebody else, and so straightening out that, you can’t build more permanent housing if you can’t figure out whose land it is. 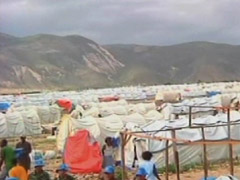 ABERNETHY: Yeah, I have a friend who’s seen a lot of relief efforts all over the world, and he says he’s never seen any place where there were so many Christian relief groups.

LAWTON: Well, certainly many of these Christian groups and other faith groups really felt connected to Haiti. They’d been working there in the past, and so they have spent a lot of time, and there were just a huge number of volunteers going down trying to help out, and we should say that even amidst all of the problems and the fact that more progress hasn’t been made, they say there has been progress. You know, there are some positive things, too.

ABERNETHY: And some things haven’t happened that might have and that people feared, like epidemics and terrible security problems.

LAWTON: Well, mass starvation. I mean, when you think about it, people aren’t starving to death there. They’re hungry, yes, but they’re not starving to death. And so I think I’m hearing a lot from the faith community, people saying it’s going to take a really long time. We knew that going in, and we’ve seen that six months in, but people shouldn’t give up hope, because they think things can be done.