KIM LAWTON, correspondent: It’s sunrise over Louisiana bayou country. Normally, this is when the fishermen here set out in search of shrimp and oysters and crabs. But things aren’t anywhere near normal. Instead of fishing, these men have been hired by BP to look for spreading oil, to document damaged wildlife, and to assist in the cleanup. There’s a safety briefing before they head out, and Pastor John Dee Jeffries opens the meeting with prayer.

REV. JOHN DEE JEFFRIES, First Baptist Church, Chalmette, LA (praying): Father God in Heaven, I pray that you will watch over these men, these women. Protect them today.

LAWTON: Jeffries is pastor of the Chalmette First Baptist Church. He’s one of several local ministers who have been coming out to the docks every day to support the fishermen.

JEFFRIES: Can’t solve all of the world’s problems, but sometimes just knowing that there’s someone who’s there who cares is more than sufficient.

LAWTON: Jeffries is concerned that despair is growing across the entire area.

JEFFRIES: Basically what I hear is a lament, a sorrow, because of what was and what now is. It seems to me to be too meager a choice of words to simply say that a lifestyle is at stake here. It is the entire context of a person’s life, the whole backdrop, the fabric, that is being torn asunder by this crisis.

LAWTON: So much in these communities revolves around the seafood industry, and that has been thrown into turmoil, from boat captains who can’t fish and therefore can’t hire deckhands to the mechanics who aren’t being hired to do repairs and the small businesses that aren’t selling supplies. According to US government figures, more than 6,000 vessels and 40,000 people have been brought in to help clean up the oil and deal with the crisis. But many in the fishing industry say they haven’t been able to get replacement work, and they don’t know when they’ll be able to resume their livelihoods.

BYRON ENCALADE, Louisiana Oystermen’s Association (speaking at meeting): And I know this is not going to end in one or two weeks, one or two months. May not even be one or two years…

LAWTON: Byron Encalade is president of the Louisiana Oystermen’s Association. He’s become a vocal advocate for the poorest fishermen, especially in remote bayous.

ENCALADE: Why must I always have to go through loops to get you to do the right thing toward my people?

LAWTON: He says after Hurricane Katrina, it was contractors and large, politically connected organizations that received most of the government grants and outside aid. He worries about the same injustices this time.

ENCALADE: If it takes every ounce of my breath, it’s coming out, the truth is coming out. And you’re not going to sit up here and hoodwink the system and think that you’re going to go around and pay your big salaries and all that to the people that works inside your organization and these poor people are suffering.

LAWTON: Many fishermen are having trouble filling out the complicated forms to get compensation from BP, or they don’t have adequate receipts to document their loss of income. People like Errol Battle are falling through the cracks. Battle is a deckhand on oyster boats. He lost everything in Katrina and has been living paycheck to paycheck. Since the oil spill, the boats he works on haven’t been leaving the dock.

ERROL BATTLE, oyster boat deckhand: It really hurts. The oil spill came. It really punished us. It really did. 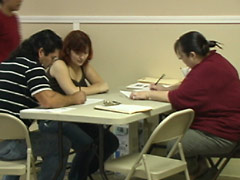 LAWTON: Local faith-based groups have been trying to do what they can to help. Catholic Charities of the Archdiocese of New Orleans has set up relief centers in churches around the region. At Saint Anthony’s in the fishing village of LaFitte, people packed in the church hall to receive bags of food and gift cards for groceries. Case managers helped people fill out BP claims and apply for government aid. A crisis counselor mingled in the crowd, offering emotional support and referrals for more intensive counseling services. And there were activities to help the children focus on something other than the oil spill. At this center, there was also specific help for the Vietnamese American community, which makes up more than 30 percent of the Gulf Coast fishing industry.

MARGARET DUBUISSON, Catholic Charities Archdiocese of New Orleans: Those Vietnamese immigrants are a very independent group of people. Their culture is intact. I mean if you go out to certain sections of New Orleans East you’ll see entire neighborhoods where all the signage is in Vietnamese. For them to negotiate with the BP claims process, and food stamps, and a lot of forms that are only in English, and a lot of websites that are only in English, it’s very difficult.

LAWTON: In May, BP gave $1 million to Catholic Charities and the Second Harvest Food Bank, but that money has now been spent, and other potential donors seem to be holding back.

DUBUISSON: One of the kind of astounding things that we’ve been hearing is that this is a BP problem and BP should pick up the tab. And you know we’re not here to assign blame, we’re just here to help people.

LAWTON: New Orleans Archbishop Gregory Aymond has been visiting some of the hardest hit fishing communities, sometimes traveling by helicopter to get to the more remote places. On this Sunday, he visited Lafitte.

ARCHBISHOP GREGORY AYMOND, Roman Catholic Archdiocese of New Orleans: Personally I wanted to be with them in solidarity, and also as the archbishop and their shepherd to reassure them that in times of challenge and difficulty God never abandons us.

LAWTON: Virtually everyone here at St. Anthony’s has been affected by the oil spill. And the archbishop says the situation has been especially difficult coming on the heels of Katrina.

AYMOND: What has happened through this is that all of the wounds and the fears and the discouragement, and the intensity of Katrina has reopened. I can see it on people’s faces, I can hear it when they talk. There is definitely post-traumatic stress, which has not yet been fully dealt with. And then this tragedy on top of that just reopens all of that stress.

LAWTON: Still, he says he’s been encouraged by the strength of faith that he’s seen.

AYMOND: They are an amazing people. They are resilient. They get discouraged, but they don’t give up. They become puzzled and questioning of God, as we all would in circumstances like this, but they are people of faith.

LAWTON: St. Anthony’s parishioner Tilden Perez, Jr. says he still trusts God, even though he and his entire family have been devastated financially. Perez says his life, past, present and future, is tied to the bayou.

LAWTON: Perez is a commercial fisherman, but he hasn’t been able to get work since the oil spill.

LAWTON: He takes solace in prayer and worship music. He played us a song he says God put in his heart.

LAWTON: Even as people here try to hold on to hope, worries about the future seem almost overwhelming. In addition to the economic worries, there are concerns about the long-term environmental impact, not only of the oil, but of the chemicals being used to disperse it, chemicals that have been banned by other countries.

LAWTON: There are worries about what’s going to happen to the wildlife and the beauty of the bayous.

LAWTON: And mostly, worries about what will happen to the people here.

JEFFRIES: Katrina was sudden, it was rapid, everything was gone in an instant. But now this is slow. We have time to build up worries, anxieties, fears. Before we were stunned. Now we’re filled with question marks in our minds.

LAWTON: Questions with no quick and easy answers.

ABERNETHY: It seems as if there’s not nearly as much help going from churches and other organizations around the country going to New Orleans as there was right after Katrina, is that right?

LAWTON: Well, certainly after Katrina there was this huge outpouring, people wanted to do things, although in the immediate aftermath of Katrina they were still trying to figure out what to do. I think that’s what’s happening here as we heard from so many of the people we interviewed. This is still unfolding, and you know people aren’t sure what the needs really are, what they are going to be. Also, things aren’t quite as obvious. With Katrina, there were houses, people could really dive in, you know, and with this the people who are cleaning up the oil have to be specially trained, so there aren’t that many hands-on jobs right now.

LAWTON: Exactly. We heard, you know, BP has the ads saying we are going to make this right. And so we heard from many of the local groups that are trying to give immediate help or intermediate help saying they’re not getting donations from the outside like they did from Katrina in part because there’s this feeling of, well, BP should be taking care of it. BP did give some money to charity, but the Catholic Charities, as we said, they’ve already used it up, and in this intermediate time people still are in need.