Jazz trumpeter Terence Blanchard spoke August 17, 2007 with Religion & Ethics NewsWeekly about his recent CD “A Tale of God’s Will (A Requiem for Katrina)” when he was in Washington to play at Blues Alley. Produced and edited by Patti Jette Hanley. 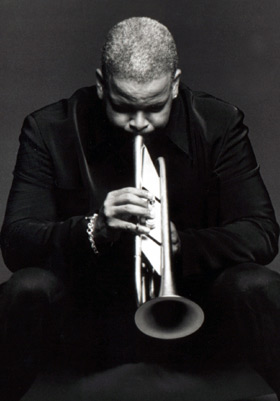 TERENCE BLANCHARD: In the aftermath of Katrina, when you’re faced with that level of devastation, you know, and you’re frustrated beyond belief, you’re hurt beyond anything you can imagine, I mean it causes you to dig deep and try to find some answers.

And people were asking me immediately in all of my interviews, you know, are you going to write music, you know, based on the hurricane? And I kept telling them, I said man, this thing is so vast it’s hard to kind of assimilate everything, and I don’t hear anything right now.

I stood in front of my mother’s house, and it was amazing, because the only thing I heard was silence. I mean–and it was very bizarre–I didn’t hear any insects, no birds, no dogs barking, nobody cutting the grass, no cars moving, nobody moving around. Nothing. Only air. Only the wind.

In the Christian faith, you know, we have a saying, you know: God acts in strange ways. So for me, I think this is a way for God to get our attention, basically. You know, we haven’t been paying attention to a lot of things, you know. And we’ve been letting a lot of things slide. So maybe this is a way for us to kind of stop and take a hard look at what we’re doing as a community.

When I saw the large numbers of people who were struggling to survive in New Orleans in the aftermath of the hurricane–that broke my heart. Then it also broke my heart to see how vast numbers of Americans came together to support and try to help people in need, you know, and that goes to the core of what I believe about human compassion.

With this album, you know, I mean, a lot of people have been talking to me and they’ve been saying the music has a lot of deep spiritual roots and it does. I mean, I grew up in a church. And that music has never–it’s always been a part of me, always, you know, and this album gave me a chance to kind of dig deep in that direction, you know. It gave me a chance to kind of not shy away from those issues but deal with them directly and just express how I feel based on my beliefs.

Recording it in a church–the thing I kept thinking about was, you know, I have to let my feelings go. I have to be honest. I’m not making an album for a certain demographic, you know what I mean? This is a project about human tragedy and the endurance of the human spirit, and I have to be true to that.

When we were listening to the playbacks, the thing that I kept thinking about with this music is that not only is it hopeful music but it embodies a number of other emotions: hopelessness, helplessness, anger, and frustration. You know, the piece itself, “Levees”–the strings represent the water that’s just everywhere, and the trumpet represents the cries for help that just went unheard.

What I hope for in New Orleans is the same thing I hope for the country, really. I mean, I really hope that, you know, as a society we really just ought to become more active, and I’m seeing it in New Orleans. The beautiful thing about being in New Orleans right now is that, despite all of the lack of support, you know, from the federal government there are a lot of people who are moving home, and a lot of people, a lot are doing it on their own. And granted we still have a very, very long way to go. There’s decades of work to be done to rebuild the city. But it’s really beautiful to see that pioneering spirit that we’ve always equated with being truly American.