NAT TURNER (Our School at Blair Grocery): This garden is the result of a lot of blood, sweat and tears and hard work in a neighborhood that a bunch of folks had given up on.

VALENTE: New Orleans’ Ninth Ward is what the U.S. Department of Agriculture calls a “food desert.” Food deserts are communities with little or no access to healthy food. For the urban poor, here and elsewhere, grocery shopping is often limited to places like this: higher-priced local convenience stores that are short on fresh healthy food and long on snacks and liquor. The problem extends well beyond New Orleans. The Agriculture Department estimates that 23.5 million Americans live in food deserts, more than a quarter of them children. The reason food deserts exist comes down to simple economics: large grocery chains and high-end supermarkets say they don’t have enough of a customer base in some neighborhoods to make opening a store profitable. 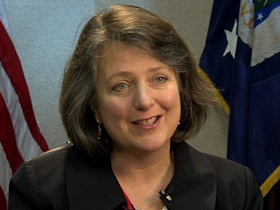 KATHLEEN MERRIGAN (Deputy Secretary, USDA): There are a lot of different solutions to food deserts and one size doesn’t fit all.

VALENTE: Increasingly though churches and other faith-based organizations are stepping in to help. Nat Turner’s project is called Our School at Blair Grocery, a learning center named after a store that existed on the site before Hurricane Katrina. His garden or “urban farm,” as Turner likes to call it, is more than just a pipeline for providing fresh produce. His students learn composting, poultry husbandry, and greenhouse management, among other things.

TURNER: It’s a safe space for young people to work in and be around in a neighborhood that otherwise is kind of wild, wild West and a little bit dangerous. We have classroom time, we have outside time, we’ve got just kind of casual kicking and hanging out time.

VALENTE: The produce is free for people in the neighborhood. Through a combination of government and private funds, young people are paid to work in the gardens and also learn to cook the food they grow. 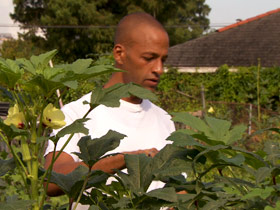 TURNER: The other challenge is people don’t really know what to do with food. You know, they’re not sure how to cook fresh vegetables. So it’s easier to buy meat and make French fries, right? And so what you end up with is kids who have full bellies, but they’re starved.

VALENTE: Food deserts contribute to high rates of diabetes, obesity, and cardiovascular disease. The problem is particularly acute in areas where the only option for food shopping is a small neighborhood convenience store.

KEVIN BROWN (Trinity Christian Community): We really need to care about the entire person, holistically. If we’re just caring about a person’s soul, their spiritual part, then we’re not really caring about people.

VALENTE: Kevin Brown grew up in Holly Grove, another neighborhood devastated by Hurricane Katrina. His father was the pastor of a church in the neighborhood.

BROWN: In our community, there was a high incidence of heart disease, diabetes and food-related illnesses. And so we envisioned using space that had been ruined by Katrina in a new way, repurposing this old nursery to become a farm and market so that we can feed the people of the community and take care of some of those food-related illnesses. 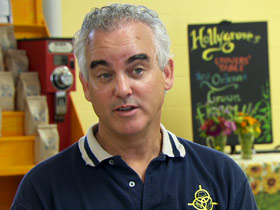 BROWN: We have a discount for community residents. One of the benefits of eating locally is you don’t have to ship in it from California, so we can keep the cost down a little bit. The other thing is if somebody volunteers here—we have a lot of community volunteers—we give them the vegetables.

VALENTE: These days, small neighborhood gardens are also popping up all over the city on previously abandoned lots and even in some residents’ backyards. This past summer, 30,000 teenage volunteers—unmistakable in their in brightly colored T-shirts—arrived in New Orleans from Lutheran congregations across the country to help till and plant. Sanjay Kharod works to connect local residents with organizations and groups, like these Lutheran volunteers, that can help them grow food.

SANJAY KHAROD (New Orleans Food and Farm Network): There’s a long history of growing in the city, and what we’re trying to do is we’re trying to encourage people to do that again. 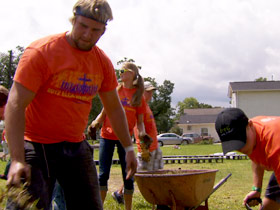 VALENTE: By and large, residents have reacted enthusiastically.

HENRY MARSHALL, JR. (Gardener): I go to the store, if I decide to buy me some strawberry, pop one of them open, taste it, and there’s no taste to it. You know, and I grew strawberries in my yard and picked that, and they’re nice and sweet.

VALENTE: Food deserts have become more numerous in New Orleans since the hurricane. According to the Congressional Hunger Center, the average grocery store here now serves 16,000 people—twice the national average. Not having a full-service grocery store ultimately costs communities millions of dollars in what’s called “grocery leakage, money that people spend outside their community for food.

DEBRA SURTAIN (Apostolic Community Garden): We built a 40-foot raised bed and in that raised bed we started growing tomatoes, basil, mint and peppers. We grew and we harvested already the collard greens and mustard greens. 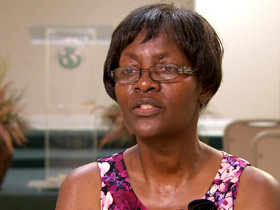 VALENTE: Another trend is for churches to plant their own gardens. The Apostolic Outreach Garden is the dream come true of Debra Surtain. A trained master gardener, Surtain felt compelled to act after learning that her state ranks in the top 10 for obesity or diabetes. Now, 27 members of her church are part of its garden club.

SURTAIN: It doesn’t cost anything right now, we just ask them for a donation because of limited funds.

VALENTE: Surtain and other food activists say what they are doing can only be a start. They insist the nation needs a broader discussion about how—and what—its citizens are fed. First Lady Michelle Obama has made battling childhood obesity a personal cause and has championed teaching children how to garden.

MERRIGAN: People say to me, “How can you have obesity and hunger at the same time?” They seem like they’re problems at odds. But in fact they have the same root cause, and that’s lack of access to good healthy foods. 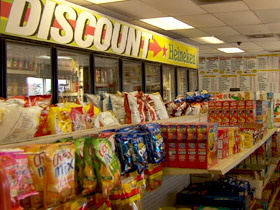 VALENTE: Government can advise and educate the public about healthy eating, but ultimately it can’t demand people change their eating habits or force supermarkets to locate in poorer neighborhoods.

MERRIGAN: Maybe you have to do something innovative. Maybe you actually have a mobile supermarket, grocery, that comes into a community. So on Wednesday night when the bookmobile comes and the community health facility comes on wheels, the grocery comes on wheels as well so people can get access to the food that they need.

VALENTE: Nat Turner says the national discussion about food has to move beyond “food security”—whether or not the poor have enough food to eat—to something broader.

TURNER: A more important conversation is to talk about food justice where people not only have access to it, but they can afford it, where the food is grown sustainably so it’s not full of chemicals and all that kind of stuff. That the money for the food stays in the community, and so moving, bringing it up a notch from food security is bringing it up to food justice, right?

VALENTE: Food justice, these activists say, is not merely a question of health, it is both a fundamental right and moral imperative.