BETTY ROLLIN, correspondent: When Joseph Reyes, Catholic, and Rebecca Shapiro, Jewish, got married in 2004 they did not think their different religious beliefs would be a problem. They were leaning toward Judaism. The wedding ceremony was Jewish and later Joseph converted. But by this past April they were divorced, with religion playing a major role. Their daughter, Ela, now 4, was at the heart of the dispute.

JOSEPH REYES: Well, the decision was made that we would expose her to each of our respective faiths, and our daughter, Ela, would make her decisions based on what she saw.

ROLLIN: But once you had converted, then wouldn’t you be educating your child as a Jew?

REYES: The whole conversion ceremony was fairly suspect because I was just handed a bunch of books and said, “Read these—or not.” 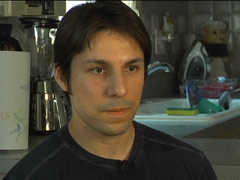 ROLLIN: So you converted, but you didn’t really mean it.

REYES: Again, it was a cosmetic fix. My then-wife set this whole thing up and all I really did was show up.

ROLLIN: It was clear that Joseph’s conversion had little weight when he had his daughter baptized—secretly. The priest was unaware of the situation.

STEVEN LAKE: Mrs. Reyes, Rebecca, is Jewish, always has been. Mr. Reyes converted to Judaism. They got married in a Jewish ceremony. Their little girl was being raised Jewish, and suddenly in the middle of the divorce case on what supposedly was just a normal visitation, he took and had his daughter baptized without any discussion with his wife. She found out by email.

REYES: Being Christian and having grown up the way I had and experiencing the things I had experienced, certainly I wanted to share many of those things with my daughter.

ROLLIN: Joseph blames the entire conflict, even his insincere conversion, on his in-laws.

REYES: Her parents made it clear early on that they had an issue with my being a non-Jew, and that was something that I think plagued and burdened the duration of the marriage.

LAKE: It was only in the context of the divorce case where he blamed this all on her parents. That he did it because of the pressure of the parents. The parents of course, denied it, Rebecca denied and said nobody pressured him into anything. 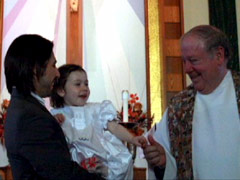 LAKE: As custodial parent, the law is that she has the right to raise her little girl in the Jewish faith. Having said that, again it’s a question of is there going to be a little exposure to Catholicism, or is it going to be each a tug of war pulling on a little girl trying to get her to follow one religion or the other?

ROLLIN: A greater tolerance of interfaith marriages has led to more of them. They now comprise 25 percent of American households. But according to the American Religious Identification Survey, interfaith marriers are three times more likely to become divorced or separated than people who marry in the same religion. 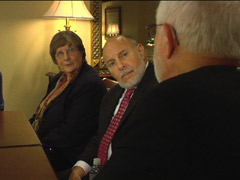 ROLLIN: All the mediators agree that the best solution for children is to be raised in one religion.

RABBI GARY GERSON: If there is a divorce and even if there isn’t a divorce, the child is put in the middle between the two parents, and the question becomes one of if I go to this faith, then am I estranging myself from the other parent or vice versa. Parents are the ones who need to make the decisions, set the boundaries and the rules for the family. Otherwise the child is caught in the middle, and beyond that it’s a lack of clarity for the child. To have a little bit of each is end up having nothing.

ROLLIN: Bridget Jeffries, an evangelical, and Paul Meyers, a Mormon, have a different view. They are raising their daughter, Harley, in both faiths. Their marriage is intact now but they were separated for awhile and they have struggled with the issue of how to religiously raise Harley. Their religious practices have much in common, but theologically there are major differences.

BRIDGET JEFFRIES: The idea of my daughter saying that she has faith in Joseph Smith as well as Jesus and the Trinity, the Godhead to Mormons, that was very difficult for me to process, to think about her going through. I mean I love my husband, I know that he believes in all that, but I really wanted my daughter to just have my own faith, without Joseph Smith and the baptismal confession. So that was a big deal to me.

PAUL MEYERS: I still want her to be Mormon since I believe that Mormon is more right than evangelical, but then again anyone who believes one thing has to assume that it’s more right than the others.

ROLLIN: They are certainly tolerant of each other’s religion, but like so many interfaith marriers didn’t understand their deep feelings about their own religion until they had children. 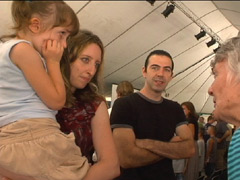 JEFFRIES: I don’t think that I realized how badly I was going to want my daughter to grow up in my faith when I had her.

ROLLIN: What bothers Paul the most is that Harley might opt out of religion altogether.

ROLLIN: Meanwhile, Paul brings Harley to his church one Sunday and Bridget brings her to her church the next Sunday. In addition, they go to both churches as a family and observe both traditions at home.

ROLLIN: Does she show any signs of confusion or do you worry that she will?

MEYERS: She shows no signs of confusion whatsoever.

JEFFRIES: Not so far.

JEFFRIES: This has been very difficult and it’s been very hard. We’ve made a lot of compromises and sacrifices to make it work. So both of our religions say to get married within the faith and we think that’s a very strong counsel that people should follow. We just didn’t.

ROLLIN: And the Jeffries-Meyers family is not alone. According to the National Study of Youth and Religion, fewer than one-fourth of 18-to-23-year-olds think it’s important to marry someone in the same faith. And even the clergy has accepted that in America today interfaith marriages are an increasing reality.

ROLLIN: What Bridget and Paul have in their favor is that they are deeply aware of the problems they are facing and will continue to face, and of the joys.