President Obama’s declaration that the combat phase of the war in Iraq is officially over brings to a partial close a drama that has engulfed American political culture for nearly a decade. His address to the nation carefully avoided both a declaration of victory and a retroactive resolution of the Iraq war debate. Instead, it looked forward and sought to affirm the democratic hope that American society can be sufficiently unified to bring positive results out of what many regard as a costly and avoidable mistake. His speech implicitly argued that, regardless of what we believed about the justification of the war in the first place, we are now responsible for determining what the legacy of the Iraq war will be in our foreign policy and our domestic affairs. 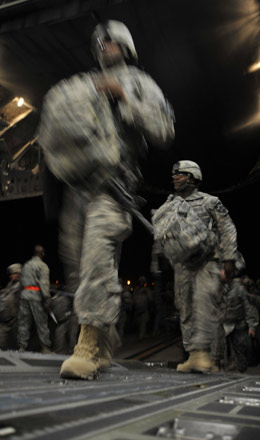 Religious citizens have particular reason to think hard about their role in determining this legacy. They, or the ideas and traditions they care about, bear a burden of responsibility for both the problems and the hopes as we move forward.

Many of them played a crucial role in encouraging the enthusiasms that led to the Iraq invasion. Conservative American Christians, in particular, actively embraced what Andrew Bacevich calls, in his book The New American Militarism, the “marriage of military metaphysics with eschatological ambition.”

“God is pro-war,” as the Rev. Jerry Falwell famously titled one of his articles in 2004. Falwell, of course, was representative of only a small percentage of American Christians, but his supreme confidence in construing the war in Iraq as a matter of good versus evil, and understanding the humanitarian dimension of the Iraq invasion in relation to the kingdom of God, was an extreme riff on views that were much more widely shared. Indeed, the most powerful Christian political movements in the United States today exhibit both an unwavering commitment to the essential goodness (and seeming omnipotence) of American military power and a strange confidence that their cultural and religious interests are being served by the ongoing war on terrorism. Even many citizens outside these movements (and these particular religious communities) display a determined confidence that the end of America’s quasi-imperial self-assertion in Iraq will be our ongoing role a “leader of the free world.”

Such views are theologically untutored and politically dangerous. In particular, they display a worrisome blindness to the full range of elements that constituted the political act of invading Iraq and that shape its potential long-term consequences. In different ways, they are premised on false or inadequate descriptions of the undertaking.

There were three principal justifications offered for invading Iraq: self-defense, the defense of the international rule of law, and humanitarian concern for the people of Iraq. All three of these—if true—are just causes for war, according to the Christian just war tradition. But a just cause does not a just war make. One requires, in addition, a “right intention.”

The criterion of right intention does not merely demand an examination of what military and political leaders think or say about what they are doing when they initiate a war. “Right intention” points toward the full range of factors that place an action in its moral species. Given everything that we know now—and even what we knew then—about how the Iraq invasion was conceived, can we really just highlight the humanitarian dimension of this undertaking and declare it the essence of the act? The fact that an unjust action has beneficial consequences or reflects some praiseworthy desires does not change the fact that it was an unwise act; it does not render irrelevant the fear-mongering, mendacity, and hubristic overreach that also played a role. The just war criterion of “right intention” requires, among other things, that the conscientious citizen drop down from the level of short-hand “principles” and describe more fully the circumstances, desires, emotions, and beliefs that go into making a complex action what it is.

There was no shortage of just war theorists in the land when the Iraq war emerged on the horizon. Indeed, their writings and public talks insured that the basic criteria of just war ethics (whether in its Christian or secular form) were well known and bandied about by even the unlikeliest of people. The views these thinkers offered, however, were often emaciated and unfit for the task. At their most critical, these theories were publicly impotent. The arguments were too abstract, and the communities whose beliefs they hoped to represent were poorly organized or nonexistent. At their most supportive of the war, the arguments were so theoretical that they merely served to justify actions that were justified on quite other grounds by the people who actually undertook them. They were exercises in placing an abstract set of ethical principles on a complex set of facts and circumstances to which they were largely alien. Too much of the picture fell away, or was rendered invisible, once the theoretical justification was put in place. What people need is a justification of war that gives a full, clear, and powerful account of the many reasons they have to be critical and worried even in the best of circumstances.

This fact invites a change in the characteristic genre of contemporary just war reflection. It may very well require that just war theorists, most of whom are employed in university philosophy or religious studies departments, learn to abandon the stilted forms of academic ethics and acquire new habits of “thick description.” The formal reasoning of the just war criteria must be put in the service of richer descriptions of the actual beliefs, practices, and circumstances that shape complex political actions. The criteria can then perform both an expressive role (by making ethical commitments that are implicit in the nation’s undertakings explicit and available for critical scrutiny) and a constructive role (by proposing important ethical considerations governing certain actions). Michael Walzer’s book Just and Unjust Wars remains a classic example of this approach and is too infrequently imitated.

As Americans now endeavor to “turn the page” (in President Obama’s phrase), we must determine whether the irrevocable past will endure like a nightmare in our efforts at world leadership or whether we will be capable of the repentance, reformation, and simple good-neighborliness that will be necessary to restore those nonmilitary aspects of our power. It is ultimately a question of the democratic freedom to remake ourselves in the light of our highest ideals. It is also a question of imagination. At the present moment, there are few reasons to be sanguine about the probable success of this effort.

Religious citizens have particular reason to contribute to public debates about the road forward. Despite the popularity among many of them of imperialistic theologies and distorted pieties, such citizens are heirs to longstanding traditions of moral and political insight, and thus have the capacity to help this society imagine new ways of employing its power and resources. Furthermore, these citizens—unlike, say, your average analytic philosopher—inherit traditions and employ arguments that are deeply embedded in the practices of actually existing communities. Ideally, religious citizens will be able to organize themselves into communities of conversation and study, so as to become communities of democratic accountability.

Howard Rhodes is currently a member of the adjunct faculty at the University of Iowa College of Law.