KIM LAWTON, correspondent: It’s one of the best loved church services during the Christmas season. With Scripture and song, the Festival of Lessons and Carols retells the Christmas story, and for many it’s a moving spiritual experience.

CANON VICTORIA SIROTA (Cathedral Church of Saint John the Divine, New York City): Lessons and Carols is not a concert. It’s not where you’re going to applaud after everything. You’re going to allow yourself to meditate at a much deeper place.

Reading from the Book of Genesis at Service of Lessons and Carols: Then the Lord God said to the woman, what is this that you have done? The woman said, the serpent tricked me and I ate. 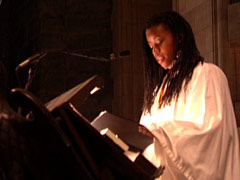 LAWTON: The readings start at the beginning with the Book of Genesis and the story of Adam and Eve sinning in the Garden of Eden and damaging their relationship with God. The lessons move on through the Old Testament prophets who foretell the coming of a Savior who will restore the relationship with God.

Reading at service: The Virgin shall be with child and bear a son and shall name him Emmanuel…

LAWTON: And then to the Gospels, which describe the coming of Jesus.

Reading at service: And of his kingdom there shall be no end…

SIROTA: From a theological standpoint, and actually from a visual standpoint, it is getting that wide-angle lens and moving back and seeing the whole story, seeing the panorama of God’s plan for salvation for humankind and why that was even necessary.

LAWTON: Canon Sirota wrote a book called “Preaching to the Choir.” She says the songs after each reading help amplify the message. 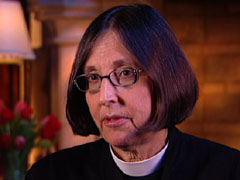 SIROTA: In a sense, the hymns and carols, most of them are based on biblical sources, so they are interpreting for us. The music really tells you how to feel about the text.

LAWTON: The Festival of Nine Lessons and Carols has its roots in ancient Christian vigils. But the service in its current format was first held in 1918 at King’s College in Cambridge, England. It was adapted by Reverend Eric Milner-White, dean of King’s College and a former army chaplain. Milner-White was preparing a Christmas Eve service just after the end of World War I. The war had taken a heavy toll on his flock. About half of King’s undergraduates had gone off to war, and a third of them never came back. Milner-White wanted to do something special.

WILLIAM EDWARDS (Editor and Author, “The Festival of Nine Lessons and Carols”): You have to visualize December 1918 in Cambridge. You’ve got a congregation which is probably largely made up of widows, girlfriends—in those days they’d have been called fiancées—children there to somehow deal with this horror that they’d just been through. I think he wanted to deliver some level of comfort, that all this pain and suffering and death had some meaning. 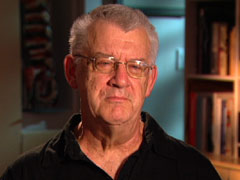 LAWTON: Bill Edwards is author of a book called “The Festival of Nine Lessons and Carols.” He says the service that Milner-White put together caught on.

EDWARDS: Throughout the early 1920s, more and more people would attend the service, and by 1928 it was well known enough that the BBC, which was then in its infancy—I mean we’re talking radio 1928—picked it up to broadcast throughout the British Isles, and then two years later throughout the world.

LAWTON: Minnesota Public Radio began broadcasting the King’s service across the US in 1979. The service in King’s College’s magnificent 16th-century chapel is not televised. People line up outside for days before Christmas Eve, hoping to get one of the best seats. Edwards describes himself as a lapsed Congregationalist, but says attending the service in person was like being on a religious pilgrimage.

EDWARDS: My favorite is I think probably everybody’s favorite, and I can’t even talk about it without getting choked up because it’s so emotional, and that’s hearing those first few bars of “Once in Royal David’s City.” It’s just magic. Magic. 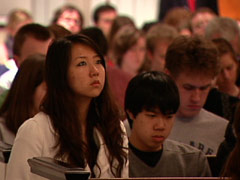 Reading at service: The spirit of the Lord shall rest upon him…

LAWTON: Local churches began copying the King’s service and then adapting it. People in the pews loved the format, and pastors appreciated it because they didn’t have to come up with a sermon. Protestants and Catholics alike do Lessons and Carols services. The Catholic version usually includes some rendition of Ave Maria. While many services stick with the familiar carol favorites, others incorporate more contemporary songs, or songs from a variety of cultures.

EDWARDS: It’s wonderful that a concept that’s almost 100 years old has the power, and has been helped by technology, i.e. worldwide radio, to say something to ministers, priests, whatever you will—hey, I can do something with this that’s meaningful in my church.

REV. JAMES KOWALSKI (Dean, Cathedral Church of Saint John the Divine, New York City, speaking to congregation at Advent Procession): As we await the great festival of Christmas, let us prepare ourselves so that we may be shown its true meaning. 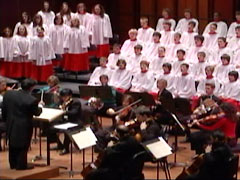 LAWTON: Some churches don’t actually sing carols until right before Christmas, so their congregations have developed Advent Lessons and Carols services for early December using Advent hymns instead of carols. At New York’s Cathedral Church of Saint John the Divine, they turned their entire Advent Lessons and Carols service into a processional, with the choir moving to every corner of the church. Advent lessons and carols tend to be more reflective, while the Christmas versions take on a more joyous mood. Sirota says the music reflects that.

SIROTA: The amazing thing about Christmas is that it allows us to celebrate a really profound joy, the joy of being re-found by God, of opening our hearts to that love in a new way and of receiving this light that will transform us and reconcile us not only with God, but with each other.

LAWTON: Every Christmas Eve, Bill Edwards and his wife have friends over to listen to the King’s College service live on the radio or the Internet. He downloads the bulletin or order of service so they can all follow along.

SIROTA (reading at Advent Procession): A reading from the Gospel of Luke…

LAWTON: Sirota believes that’s the power of the Festival of Lessons and Carols and of the message that it celebrates.

SIROTA: The gift of Lessons and Carols is that it takes time. You let the music, the carols, the texts, the prayers wash over you, and the light will break through. Some text, some image, some musical phrase will change you, and that’ll be the gift you get.