LUCKY SEVERSON, correspondent: This is a reentry program for inmates about ready to be released back to their communities. It’s funded by the state of Hawaii and the social ministry of the Catholic Archdiocese of Honolulu. Angela Anderson is one of the fortunate participants. She’s been serving time for drug abuse.

ANGELA ANDERSON: When I had got out of jail before, you know, I went directly back to drugs, because that’s really all there was. But here I got structure. I made great friends. You have classes that you have to attend to. You have to live to a schedule. 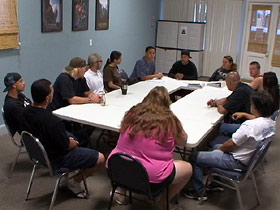 SEVERSON: What it does is lessen the odds that she’ll go back to prison. In 2009, the latest statistics available, there were 2.3 million Americans serving time behind bars, the highest documented incarceration rate in the world. Since the early 1970s, the prison and jail population has increased by 700 percent. Now, faced with the staggering costs of incarceration, about $55 billion a year, politicians are asking community and faith-based volunteers to help the reentry process for the hundreds of thousands of ex-cons who are coming home. The state of Hawaii is no exception. To reduce the spiraling costs of incarceration, a number of states started exporting inmates to cheaper localities, often to other states and quite often to private for-profit prisons. Over the years, Hawaii has shipped thousands of inmates to the mainland. At latest count, there are over 1800 in one prison in Arizona. But the state has discovered that the costs are considerably greater than projected, and not just in taxpayer dollars.

JUDGE STEVEN ALM: We’ve had a terrible “nimby” problem over the years—not in my backyard—about building another prison.

SEVERSON: Judge Steven Alm started the nationally recognized Project HOPE, a program for probation violators that has cut recidivism rates in half. 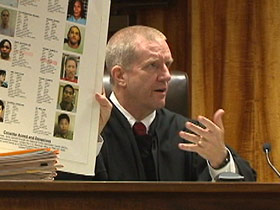 ALM (speaking to prisoners): But when you’re out in the world probably you’re the one who’s going to be making all these decisions.

SEVERSON: Some are now reconsidering the wisdom of locking up prisoners from Hawaii almost 4,000 miles from their families. Kat Brady is with the Community Alliance on Prisons.

SEVERSON: Nationally, about six out of 10 inmates commit another crime within three years of being released. Brady and others here now think that Hawaiian prisoners serving in Arizona are bringing gang crime back with them. Jeffrey Silva was in Arizona, part of a 10-year sentence for failing a urine drug test while on parole. 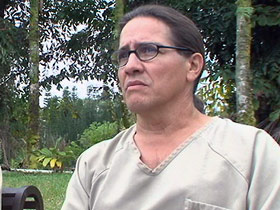 JEFFREY SILVA: You feel alienated way out there and stuff like that, so you form friendships with each other and stuff and bonds, and next thing you know it’s a gang.

SEVERSON: Ted Sakai is a former warden and Hawaii public safety director. He says Hawaiians feel a cultural and religious connection to their homeland.

SAKAI: What we have found is that just having somebody you can talk to, just having a connection with your neighbor, church member, with—definitely with somebody in your family can make a big difference.

BRADY: There was a big study done in California, probably the premiere study, and they found that people who are incarcerated who had no visits were six times more likely to be rearrested, where people who had at least three visits from three separate family members a year—their recidivism rate was much lower.

SEVERSON: Nationally this year about 650,000 inmates will be coming home from prison. There are so many and so few services to help them reenter society instead of reentering a life of crime. Here in Hawaii, the local Catholic Church asked for some help from Gene Williams.

GENE WILLIAMS: Faith-based organizations, as a matter of public policy, have been designated first responders by default. But they’re being asked to do it with no resources.

SEVERSON: Are they stepping up?

WILLIAMS: They’re stepping up with collections, with volunteer hours, but there’s a real problem. That’s not sustainable.

WILLIAMS: And when you’re talking about communities having to absorb and reintegrate people coming back from prison, those costs are astronomical. You have mental health costs, you have housing, social services, family reunification, anger management, drug treatment. There are a whole host of reentry ingredients that faith-based organizations are actually, you know, investing in and providing.

SEVERSON: Les Estrella works with addicted inmates for the Archdiocese of Honolulu. Years ago, he served time for drug abuse.

LES ESTRELLA: Research has shown that faith, as far as recidivism, recovery from substance abuse, you know, mental health, those types of disabilities, is really a good resource. It’s a good place to be, it’s s safe place for the most part. 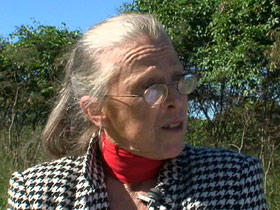 ELLIOTT KAIMI: Yes, this program teaches you how to fill out applications, make resumes. They also teach you how to do what they call a mock trial interview, one on one with a staff, so that way when you do get interviewed you don’t feel nervous.

ANDERSON: You can go in there in the morning, get on the Internet, you check your email, you go to Craig’s List, Hirenet, put in applications. It’s really wonderful.

SEVERSON: Angela got a job working at a homeless shelter.

JAMES RODRIGUES: I’ve been going out from November every day looking for a job.

RODRIGUES: No, but I still—everyday I put in at least one application a day.

SEVERSON: James Rodrigues is now in a low-security Hawaiian prison that allows him to leave the institution each day to look for work. After the long separation from his parents, they’re quite happy to provide transportation. Gene Williams says faith-based groups are so overburdened with prisoner reentry they need help, too.

WILLIAMS: Faith-based organizations believe in redemption. In many ways, though, that belief system is being exploited. Government can say, “We can’t provide programming for people coming home because we have budget constraints.” But faith-based organizations, if they refuse people they are undermining the very integrity of their institutions, because compassion is part of their mission, and so what you find now are congregations who are struggling, and many who are developing compassion fatigue.

SEVERSON: Meanwhile, Hawaii has a new governor who has pledged to move the prisoners back to the islands and end the contract with the Arizona prison. Whether there will be funding to help with their reentry remains to be seen.