LUCKY SEVERSON, correspondent: Happy days in Roswell, New Mexico, as soldiers in a National Guard engineer company deployed in Afghanistan come marching home. For some, unless they get called back the war is over. For others, it’s only begun.

MICHAEL ABBATELLO: I was a rifleman.

SEVERSON: In an infantry unit?

ABBATELLO: In an infantry line unit.

SEVERSON: In the Marines? 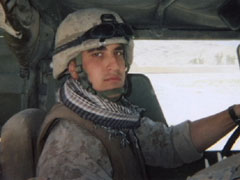 SEVERSON: Michael Abbatello joined the Marines September 12, 2001, the day after the terrorist attack on the Twin Trade Towers. Like tens of thousands of American soldiers coming home, he has struggled with the warning signs of post-traumatic stress disorder or PTSD, symptoms like nightmares, insomnia, hyper-vigilance and guilt, and for him something even deeper—a wounding of the soul.

ABBATELLO: Something is changed. You know, you feel down to your spirit. You know that you’re different now. You know, we don’t really have a consciousness of our own spirit until it’s wounded, and then it needs help.

SEVERSON: With the increase in crime and suicide among veterans of Iraq and Afghanistan, the notion that war can actually damage or warp the soul has been gaining traction among experts in the field. Nancy Sherman, a professor at Georgetown University, has studied and written extensively about the hearts, minds, and souls of soldiers.

PROFESSOR NANCY SHERMAN (Georgetown University): I like to talk about the moral emotions of war, and they include wounds, but they’re the hard, bad feelings that may erode at your character. That’s the really deep ones.

SEVERSON: The kind of emotional wounds Lieutenant Colonel Eric Olsen witnessed as a chaplain in Iraq. 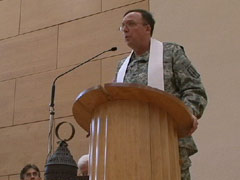 LT. COL. ERIC OLSEN: It’s a hard place where you are asked to do some very difficult things, and once you’ve crossed those lines it’s hard to navigate back. It is a soul wound. It’s definitely a soul wound.

SEVERSON: Michael Abbatello is still suffering from the guilt that his unit wasn’t there to protect an Afghan father who had provided intelligence on the enemy to the Marines.

ABBATELLO: He had trusted us to some degree that we would be there to support him and his family if he was going to be taking chances to help us, and we betrayed his trust. I mean to a certain degree we weren’t there for him. So yeah, I have guilt.

SEVERSON: What happened to him?

ABBATELLO: Him and his family were gunned down in front of their house. His beard was cut off. He was stripped and laid on top of his family.

SEVERSON: You knew the kids, too? The kids, the whole family?

SEVERSON: A recent survey by the Rand Corporation found that over 300,000 veterans are suffering from some form of PTSD, which has put enormous pressure on veterans’ hospitals like this one in Los Angeles, which also houses New Directions, a residential treatment program for veterans. Clinical director Monica Martocci says no one knows the number of PTSD victims for certain because many veterans refuse to acknowledge it.

MONICA MARTOCCI (Clinical Director, New Directions): It doesn’t bode well for their career if they’re in any way seen as mentally unstable.

SEVERSON: Those who have studied the issue say moral wounding is especially prevalent among recent vets because so many have served more than one tour of duty. Ed Tick operates a sanctuary called Soldier’s Heart for stricken veterans and says they aren’t the only ones suffering.

DR. EDWARD TICK: Twenty percent of active duty troops and as much as 40 percent of Guards and National Guardsmen and reservists are coming back with PTSD. These are astronomical numbers, and we could go through substance abuse and divorce and child abuse and homicide and imprisoned populations, so they are really hurting. 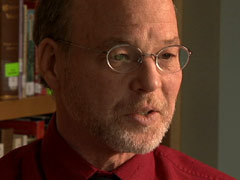 SEVERSON: The Justice Department estimates that nearly a quarter-million veterans of wars dating back to Vietnam are serving time behind bars. The New York Times found 121 cases in which Iraq and Afghan veterans committed murder after their return from war. Only a few had been screened for mental health problems, and unlike many civilian criminals, the overwhelming majority had no prior criminal record.

Dr. Jonathan Shay, a neuroscientist who works with the Veterans Administration, ridicules the age-old theory that good breeding and good character will keep you morally strong even in the face of war.

SEVERSON: It alters it? It changes who you are?

SEVERSON: Michael Abbatello had never been in trouble before, but he served time in prison after his wife convinced him to sell all his unregistered civilian guns to someone who turned out to be a government informer.

ABBATELLO: You get so used to having a rifle. You know, I used to get these fears like I had forgotten my rifle somewhere, and to even imagine life without a rifle is scary.

MARTOCCI: That’s what they were trained to do and what they learned, especially in combat, is that the world is not a safe place, and they are taught to protect themselves and others so, I mean, they think everyone else is crazy for not having a weapon with them at all times.

SEVERSON: The rate of suicide among vets of the current wars has also been on the rise. A federal study in 2005 found that veterans were twice as likely to commit suicide as those who hadn’t served in the military, and PTSD is considered a significant reason why almost 25 percent of America’s homeless are veterans of all wars, even though they make up only eight percent of the population. The largest number of homeless vets reside in downtown Los Angeles, and many have found help at the venerable Union Rescue Mission. 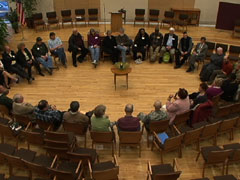 SEVERSON: Anthony Ortega now works at Union Mission. He was injured by shrapnel while his National Guard unit was in Afghanistan, found this place after living on the streets. When he got home, badly injured, Anthony fell into drugs and onto the street.

ANTHONY ORTEGA: And then doing some of the things we have to do, as far as serving our country, goes against what’s in the Bible. Coming back, having to deal with that was very difficult.

SEVERSON: Billy Zinnerman was a sergeant major in the Marines. He says the first Gulf War, where he served on reconnaissance patrols, changed him spiritually.

BILLY ZINNERMAN: Without a doubt, because you see no spirituality in war. Combat does not, for lack of a better word, expose you to the opportunity to serve the Lord.

SEVERSON: After he lost his faith, he lost his wife and his home, and now he’s trying to help other veterans at the Los Angeles mission.

ZINNERMAN: I don’t know if you’ve ever been in a position to say to yourself, if you have believed in God you think God has abandoned you. That’s what you feel in combat, because you feel there can be no God with this type of carnage going on. 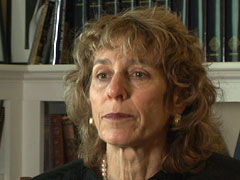 SEVERSON: Everyone we spoke with agrees that an important factor in the turbulent return of some vets is that much of the country has not shared the pain of the two wars they have been fighting.

SHERMAN: There’s lip service to the service and to saluting the service, but does the public really understand in a deep way, empathetically, what the moral burdens of war are? I don’t think so.

SEVERSON: The good news is the Department of Defense has instituted a reintegration plan for returning vets called the Yellow Ribbon Program.  Chaplain Eric Olsen officiated at this one.

OLSEN: We try to see them as soon as they come home and in 30 days and 60 days, and we bring them together and sort of tell them what they’re going to go through.

SEVERSON: And more churches are joining in, like the Unitarian church here in Albany, New York, which recently sponsored it’s first healing circle ceremony for veterans like Michael Abbatello.

ABBATELLO: I’ve lost more friends to suicides then I did in combat.

SEVERSON: For too many veterans, coming home doesn’t end with kisses and hugs. Now there is an increasing awareness and some say an urgent need for America and Americans to step up and share the pain of our returning veterans and help them reclaim their lives.