BOB ABERNETHY, host and correspondent: Now, a visit with the surviving Shakers, the Christian group known for its devotion to God, demanding lifestyle, beautiful furniture, and joyful songs. Before the Civil War there were nearly 6000 Shakers in 23 communities. Today, there is just one active Shaker village left, with just three members.

Just above Sabbathday Lake, in central Maine, the last Shaker community straddles an old road in the midst of 1800 acres of forest and farmland. At its peak, there were nearly 200 members here. Now, the three remaining are Brother Arnold Hadd, 53. He came here when he was 20. Sister June Carpenter is 72 and too shy for an interview. She has been here for 21 years. And Sister Frances Carr is 83. She was brought here when she was 10.

SISTER FRANCES CARR: I hope and I pray with all my heart that we are not the last three Shakers. 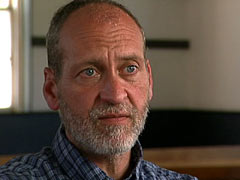 BROTHER ARNOLD HADD: As long as we do God’s work I believe in the essence of my soul that there will always be vocations sent to this way of life.

ABERNETHY: Shakers originated in England in the 1700s, an ecstatic offshoot of the more sedate Quakers led by a charismatic preacher Shakers call Mother Ann Lee. Like today’s Pentecostals, Shakers who felt the Holy Spirit would roll and twirl and speak in tongues. Shaking Quakers they were called—Shakers. Mother Ann taught that lives devoted to God could best be lived in isolated and disciplined communities in which members would share all they owned, as did the earliest Christians.

BROTHER ARNOLD: It’s giving yourself and all that you may possess to God and to the community.

ABERNETHY: The goal was nothing less than working to become perfect and to achieve salvation and heaven in this life.

BROTHER ARNOLD: It’s a prefigurement of the kingdom, and the whole idea is to live the kingdom life here and now. The things that we do—we’re not motivated by gain, or selfish gain. It’s not private. It’s not for ourselves. It’s for God and for this community. The personal pronouns have to be changed. It’s not me, my, and I. It’s ours.

ABERNETHY: So in the Sabbathday Lake cemetery there are 150 individual graves, but just one all-inclusive marker. 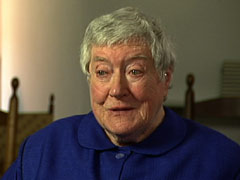 SISTER FRANCES: We think of Father-Mother God, not just as God as a Father.

BROTHER ARNOLD (praying during Shaker worship service): Eternal God, our Father and Mother, we thank you for bring so many good friends…

SISTER FRANCES: God is all spirit, and God has the strength of the male and the tenderness and love of the female.

ABERNETHY: It followed that men and women must be treated equally. But they were strictly separated. Mother Ann thought sex and marriage interfered with devotion to God.

ABERNETHY: I asked Brother Arnold how a Shaker deals with celibacy.

BROTHER ARNOLD: You just deal with it. I think that has to come as a gift from God. I really do. You have to be married to Christ. I mean Christ has to be your lover. It doesn’t work any other way, because you have to feel so attuned to that spirit and so in love with God that it can fill any void that you might have in your life. 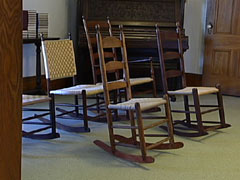 ABERNETHY: Shakers were widely admired for their craftsmanship, such as graceful chairs and other furniture—also for their hundred or more inventions, such as the flat broom.

BROTHER ARNOLD: Everything that we strive to make, either for our own use or for sale to the world, is done as perfectly as we possible can.

ABERNETHY: At Sabbathday Lake they grew herbs and sold herbal medicine and seeds. They have 19,000 apple trees, far too many for them to manage. So they rent the orchard out. As an elder, trustee, and spokesman, Brother Arnold has many responsibilities. He also feeds the sheep and Scottish cattle twice a day.

BROTHER ARNOLD: Our founder Mother Ann said, “Hands to work, hearts to God.” So for us work is worship. If you did something so menial as cleaning a toilet that can be actually an act of worship, because it’s not being done for yourself, but it’s being done for God. It’s being done for others.

ABERNETHY: Every summer members of the Sabbathday Lake support group Friends of the Shakers come to visit. Brother Arnold and one of the young visitors called the people to Sunday worship. The friends filled the meetinghouse—women in through one door, men through another, and inside the genders separated and facing each other. There is no preacher. The elders read Scripture and comment on it.

SISTER FRANCES: If we turn to that love of God there is hope for each one of us this morning. 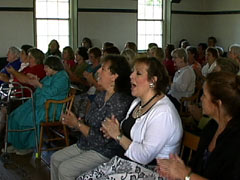 ABERNETHY: And then came the singing. Shakers are said to have 10,000 songs, of which the most famous in “Simple Gifts”:

ABERNETHY: And then came voluntary testimony.

UNIDENTIFIED MAN (speaking during Shaker worship service): So that’s what I want to do is every day is seek that Spirit of God.

ABERNETHY: While each person spoke, one of the elders chose a song that complemented what was being said.

(singing during Shaker worship service): “Mother has come with her beautiful song—ho, ho, talla me ho.”

ABERNETHY: And then another testimony.

ABERNETHY: In many ways, Shakerism has been the victim of progress. The industrial revolution lured away many young men, and Shaker craftsmen could not compete with mass production. The states began looking after orphans, which Shakers had done, hoping they would become members as adults. More recently, changing attitudes toward sex made the celibacy requirement, for many, an insurmountable obstacle. But Shakers say for those who actually try the life, celibacy is not the biggest problem. 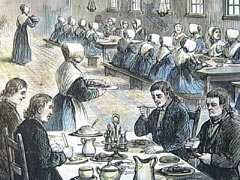 SISTER FRANCES: Usually those who have been here and have left have found it too regimented.

ABERNETHY (speaking to Brother Arnold): The obedience was the greater problem than celibacy?

SISTER FRANCES: I wouldn’t have been here all my life if I didn’t love this life, but I can’t say that it has been a heaven on earth. I can’t say that there aren’t days when it’s far from heaven.

BROTHER ARNOLD: I’m not a fool to think that it is, but the concept, the whole life is to live the heavenly life.

SISTER FRANCES: As much as possible.

BROTHER ARNOLD: And, as we have also been told, to make it as little hellish as possible for everybody else. When I was a young believer, I had a problem with somebody in the community, and my elder told me—I said, “I just can’t love them—I just don’t like them,” and he said, “Well that’s your problem. You don’t have to like anybody. You just have to love everyone.” That is probably the greatest advice I’ve ever had in my whole life. 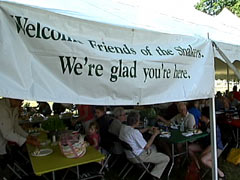 ABERNETHY: I asked Sister Frances about the friends of the Shakers. Might some of them become converts?

SISTER FRANCES: While they are very good friends and are in with us in many ways spiritually, they are not about to give up their husband, their wife, or their homes and come and live in community.

ABERNETHY: Meanwhile, the Shakers themselves do not want to change any rules to attract converts.

SISTER FRANCES: They come, and they try the life, and usually it is on our decision that they don’t remain. We don’t want it to continue in any way that is diluted from what we have lived. In our morning prayers—and each of us take a turn leading the prayer—Brother Arnold says something about the thousands who are going to be coming here.

BROTHER ARNOLD: Well, that’s my hope, and I don’t see why not. God did it once before, and I don’t know why God can’t do it again.

ABERNETHY: I asked Brother Arnold about the Shaker legacy.

BROTHER ARNOLD: I think that what Shakerism has proved to the world is that it is possible to live the fullness of the Christ-life here and now, to really start making that heaven on earth.

(singing during Shaker worship service): “When true simplicity is gained … ”

BROTHER ARNOLD: It has taken some very ordinary people and has allowed them to live extraordinary lives.

(singing during Shaker worship service): “…til by turning, turning we come round right.”