BOB ABERNETHY, host: In Libya, fighting continued between Gaddafi loyalists and the rebels despite the international military intervention, and amid the violence new concerns are now being raised about a potential humanitarian crisis in cities occupied by the rebels. Some aid groups say residents are without power, adequate food, and water. In Rome, Pope Benedict XVI urged political and military leaders to consider the safety of civilians. In the US, vigorous debate has broken out over this country’s role in the intervention and the ultimate goal of the mission.

Last week on this program, we examined the moral questions involved in intervening in Libya. A week after the intervention began, many questions remain, and we explore them with William Galston, a senior fellow at the Brookings Institution in Washington. Bill, many thanks for coming to talk to us.

ABERNETHY: You have described a theory that you call “preventive humanitarian intervention.” Would you describe what that is. 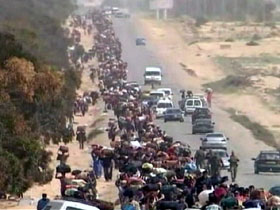 GALSTON: Sure, it’s not that complicated. In the 1990s, there were two episodes of genocidal ethnic cleansing: one in the Balkans, the other in Rwanda. In both cases, the international community waited too long to intervene, and the result was a disaster. Many people in the White House remember that. Some of them were there in policy-making decisions. They were determined not to repeat it. When the Libyan forces were on the edge of Benghazi and Colonel Gaddafi issued a bloodcurdling threat to hunt down the dissidents alley by alley, the administration thought that it had no choice but to act to prevent an impending blood bath, and I think they were right.

ABERNETHY: You’ve also spoken of our two objectives. Spell those out. 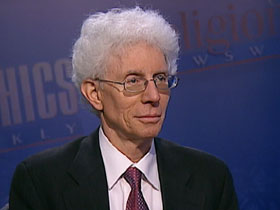 ABERNETHY: A lot of people thinking about this thing and talking about it use, just between themselves, the word “assassination.” Is it ever morally permissible to assassinate a head of state?

GALSTON: Sometimes, and international law has defined the line between the circumstances in which it is and the circumstances in which it isn’t. If a political leader is also in the military chain of command, is directly operational in that capacity, then it is legitimate to act against him or her directly. Colonel Gaddafi has never left the Libyan armed forces to the best of my knowledge, and certainly he is in direct personal control of the military forces that his sons are the commanders of. So from a legal standpoint there is no objection that I can see. From a political standpoint, there are many complications.

ABERNETHY: Another idea—a lot of people will look at what’s happening in Libya, what we’re doing in Libya, and say, “So what does that mean for other places in the world where people are suffering because of the misdeeds of their rulers?” Do we now have a greater obligation than we did before to go and intervene someplace else? 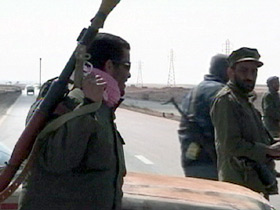 ABERNETHY: John Boehner, the speaker of the House, wrote a letter to President Obama asking the question whether it is an acceptable outcome for Gaddafi to remain in power after the military effort ends. How would you answer that?

GALSTON: It’s a very undesirable outcome. Whether it’s an acceptable outcome depends on what the alternative is. Suppose it was the case that the only way to get rid of Gaddafi would be to deploy American ground forces. Under those circumstances, I think the president has made the judgment, with which I agree, that given the fact that we’re already involved in two other countries, Afghanistan and Iraq, it would be extremely unwise and perhaps even impossible to deploy US ground forces in a third country. So we might have to live with Muammar Gaddafi as the “King of Tripoli” and protect what I think of as “Benghazistan” against him.

ABERNETHY: Very quickly, in just a couple of words, is this going to end with negotiations?

GALSTON: Who knows? But I think that would be a very difficult negotiation, because I don’t think Colonel Gaddafi has any intention of leaving power voluntarily or leaving his country.

ABERNETHY: William Galston of the Brookings Institution, many thanks.